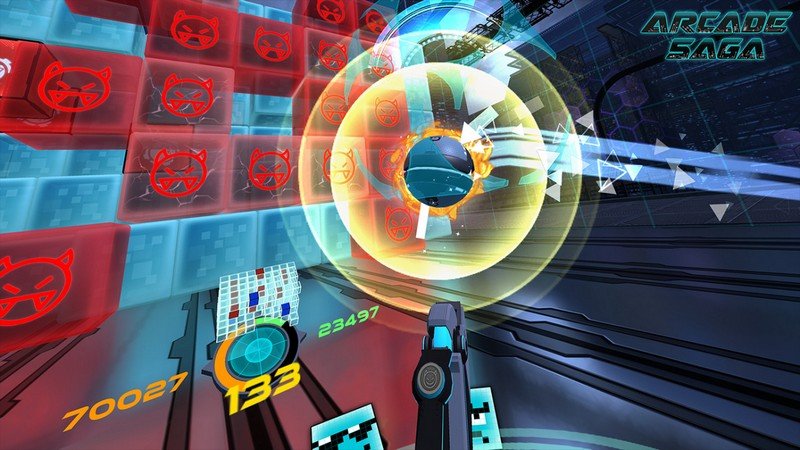 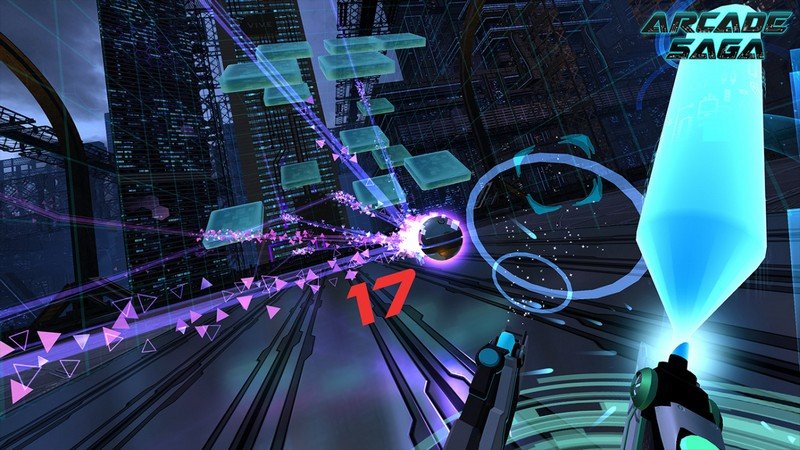 Can you take down all 4 bosses, across all difficulty modes? Or try your hand at PvP to see where you rank in the worldwide leaderboards. 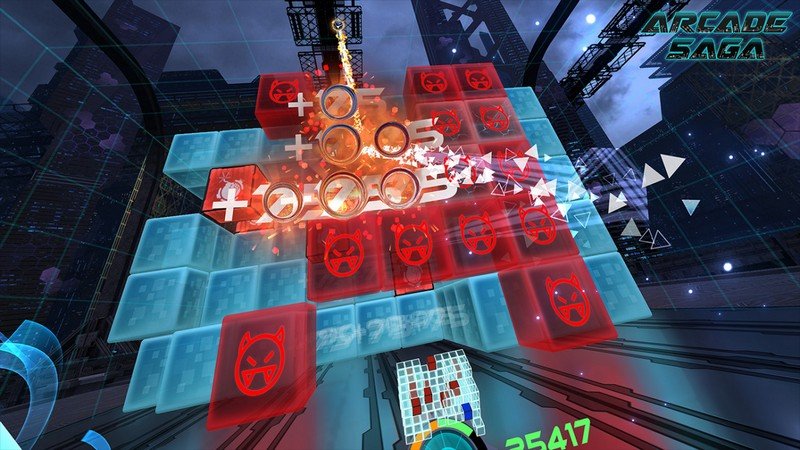 Arcade Saga allows you to take the role of a newly sentient being and battle for survival against A.I. Overlords determined to destroy you and your free-thinking. Through 3 different futuristic sports—Fracture, Smash and Bowshot—you’ll harness your reactions and strategic thinking to shoot and dodge viruses, break firewall bricks and spin data-balls past the Overlords and their minions. You will need to use your reflexes, wits and changing strategies to survive.

Futuristic and action packed, this compilation game uses 360⁰ gaming, motion controls and positional audio with a nod to Arcade games of the past. Leaderboards for all allow you to gauge your progress against friends and family.
(also playable on Oculus Rift) 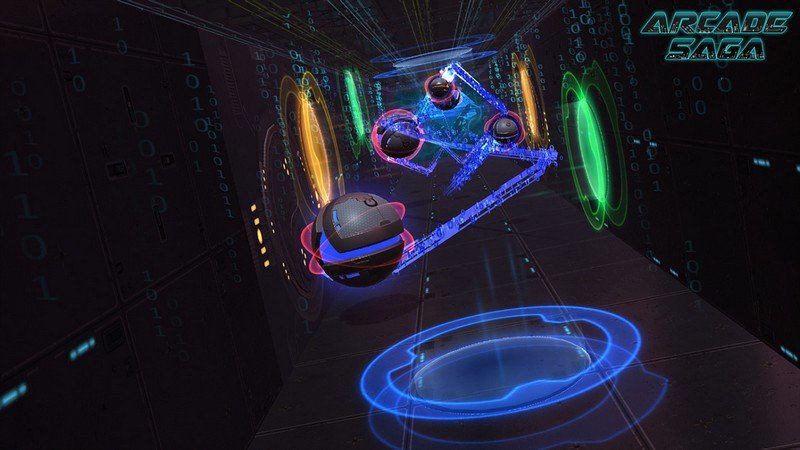 Sean
Oct 22, 2018
★★★★★
Great game(s). (Since there are a few games within this game)
Super fun, great concept and execution. Gameplay is smooth and fun. Graphics are good. I have nothing but good to say about this. Nice to be able to pick up a game, play for a bit then put down. More casual than life replacing. Definitely worth the $20. Great way to show off VR and support a great developer 😉 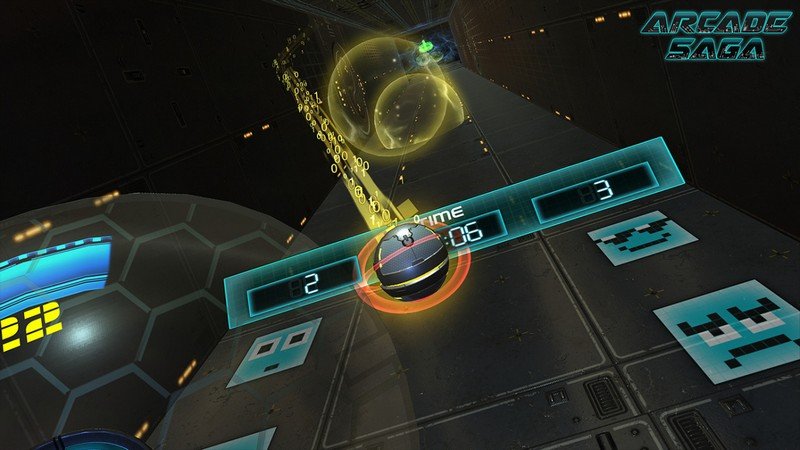 benoit
Jan 03, 2019
★★★★★
Bonjour
a very good game with beautiful graphics
levels are quite simple at first
I like it is very sporty .. attention to the space of the playroom ..

Pio
Mar 04, 2018
★★★★★
Loads of fun! Looking forward to more content (please developer/s).
This gave me a good workout and one of the fewer games to make me sweat without even realising it.

Peter
Dec 29, 2017
★★★★★
This is a great game if you need an arm workout, easy to play not so easy to complete (getting 3 stars on all levels), a few of us have played it and all like the different games, I like smash (wish I could best the end of level boss though) best. I feel any game that has the “just one more go” element must be good. The game play is simple and basic and you dont need lots of space, thumbs up from me. 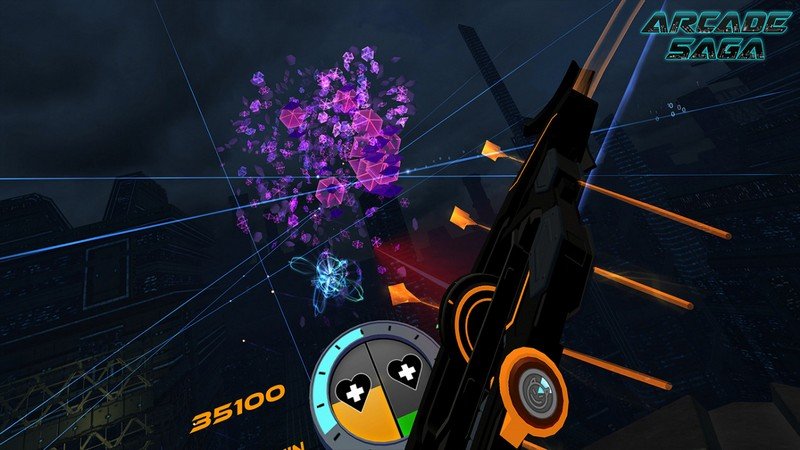 Martin
Jun 18, 2017
★★★★★
I like this game a lot. My favorite is the one with the giant cubes. It’s like you are part of the old Breakout game. Beautiful graphics and fun to play.

Roman
May 31, 2017
★★★★★
The best thing for VR imo right now. Spent hours upon hours in it. Working out while playing is the best way to get in shape for summer.

J M
May 09, 2017
★★★★★
nice VR experience, i would definitely recommend it. Higher levels of the game gives you a good exercise and its possible to level up skills making the game last longer.

Andrew
Apr 21, 2017
★★★★★
Out of all the viveport subscription games I got this was by far the best. Bowshot is addicting, both bow types are great and 20 levels including the 4 boss levels are fun. Along with being able to choose permanent powerups and reset the powerup points as needed.

The other 2 modes might not be my cup of tea but a ping pong type game and a smash the ball into the various targets game can appeal to some. In VR they are still pretty nice games and Bowshot alone was worth the playthrough!

Torley
Apr 18, 2017
★★★★★
Recommended for Viveport subscription. Game has heart. Lot of love went into this and it shows! Long intro and backstory but sit through, it helps you out. Voice instruction tutorials are useful. Very colorful graphics and sound. Great way to bring arcade dynamics into VR, feels familiar yet fresh — that’s hard to pull off.

Jägermeister
Apr 09, 2017
★★★★★
It´s very fun to play (tried via vive-subscribtion). I´d love to buy it as long as it is on sale, but viveport won´t allow you to buy a game you are using in your subscribtion 🙁 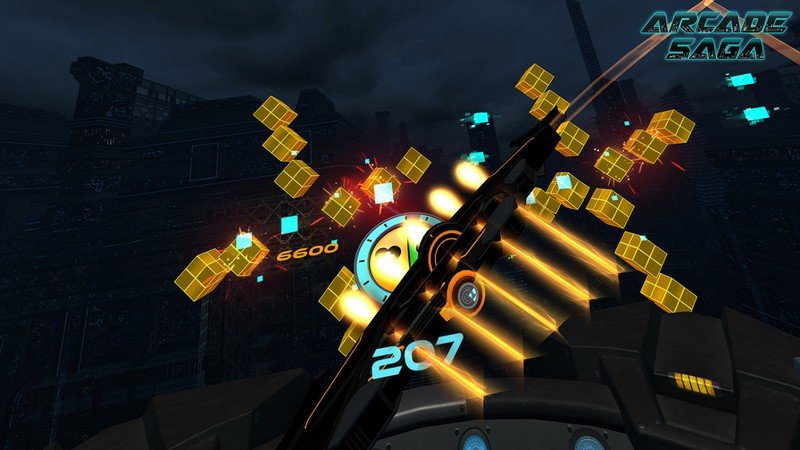 Phil
May 12, 2017
★★★★
Some nice intro to tell you what you’re playing, as well as a tutorial taking you through the nuances of play. Then three polished arcade games.

It’s reasonably hard work, but still a lot of fun.

Martin
Feb 20, 2019
★★★★
excellent game/ lots of fun and good music
gets harder especially when you get better at it

shiltin
Nov 26, 2018
★★★★
I really liked the one with the bat. The other two were so so.
The pong one has potential, but the way you have to hold the shield is akward. Should be more like a ping pong paddle.
Good gift overall, thanks

Justin
Nov 23, 2018
★★★★
So this is just a standalone version of the game from OASIS Beta?
The game itself is fun but I’ve played it before within OASIS.

Jay
Jan 27, 2018
★★★★
I have nothing bad to say about this game. Its does what it does perfectly. This is one of the first games i load up for newbies to VR.

There is a down side where you may find you hit a wall if you are in a very small playspace. You can get around this if you are aware of your limitations, but newbies who aren;t may break a controller. Make sure you have chaperone turned on!

Graphics are simple but very effective, with a fine polish and no rough edges. The sound and music wasnt distracting, and blended right into the overall experience.

Good content, three mini games, each cut from the same cloth but repackaged into fun and unique experiences, giving the game a diverse feel. The controls are tight, and while simple to get a hang of, I quickly learned there was indeed a level of skill and may I say artform involved at the higher levels. The game is addicting, a workout and at times awe inducing.

Dress
Aug 29, 2017
★★★★
Decent bunch of arcade games that get you moving!
Also very entertaining as a spectator in the room with the player.

Aimee
Jul 03, 2017
★★★★
I only played the tutorials but it seems pretty fun.
However it needs a setting for left-handed players. In Bowshot I can’t pick up the bow with my right hand so I have to switch my controllers. Then switch back for Fracture. I need to play more to figure out which hand I like the bat in, but a setting to switch hands would be great.

Chris Johnson
Jun 08, 2017
★★★★
Simple, but yet very fun game. Make sure you have a lot of space to play this to avoid hitting things with your controllers. Game modes are a good way to get active too, expect to sweat.

Jason
May 25, 2017
★★★★
Very nice Game , getting started into the world of VR.
Good Challenging lvls, fun to play has a good bit of replay value.

Ingo Liebig
Apr 20, 2017
★★★★
That was pretty cool! There was a female voice explaining the game, but all the text was japanese..which makes it hard to understand what the powerups do… I hope this will be improved soon

Juhani
Apr 08, 2017
★★★★
English language was hard to find from options but it is there… 🙂
English should be default…
I really like this concept 😀
Very retro 🙂

Reinhold
Apr 08, 2019
★★★★
Just played for 30 minutes, reminds me of Tron, 3 games in one, nice aesthetics, matching designs, different controller use and physics in each game. enough levels to have fun for some time.

darren
Oct 06, 2018
★★★
Excellent game, lots of fun, fully agree with the other reviews, I would give 4 stars if they catered for left handed people. Hopefully they will change this and add as an option.

Fil Arkonus
Oct 16, 2017
★★★
I’ve updated my review after playing for a second month. This is three basic arcade type games updated for VR. Fracture and Smash are like VR Pong and Breakout or perhaps Arkanoid and they are a lot of fun and the reason why I still recommend this as a subscription choice. However, Bowshot is unplayable. I have a bug where every time I draw the bow, my bow glitches out spinning around fast and randomly and making it impossible to aim. I found I could get past level one by not drawing the bow fully, but by the second level I found I was either not registering I had drawn at all or it was glitching out insanely. Basically 1/3rd of this game is a complete waste of my time. Despite this, I still get plenty of play out of Fracture and Smash. Had Bowshot been to the standard of the other two this would have been 4 or maybe 5 stars. Please fix bowshot!

Eric
May 06, 2019
★★★
Extremely simple, with some parts shining and other parts faltering. Overall this is a very basic experience which was mainly satisfying because it was very physically active than anything else- it could be downright exhausting! The aesthetic was also alright, although it definitely wasn’t anything spectacular.

richardallen
Dec 16, 2018
★★
Hi, bought this to hopefully use with a mixed reality headset, as it looked good.
Sadly, not visible in revive and I cant access my library in viveport.
Wouldnt it be nice if OpenVR worked….

lix
Aug 02, 2018
★★
When ever I grab an arrow the bow goes crazy spinning and inverting all over the place and you cant do anything 🙁 otherwise awesome

Michael
Apr 06, 2017
★
way too easy, everything felt slow paced. The tutorials seemed to be targeting 5 year olds and the over simplistic games were boring.

Jensei
Nov 06, 2017
★
Worst VR game so far. Physics are wonky at best, the ball in smash follows no reasonable physics while at the same time changing speed unexpectedly. No immersion what so ever. If this was a non VR title there is no way it would be released in its current state.