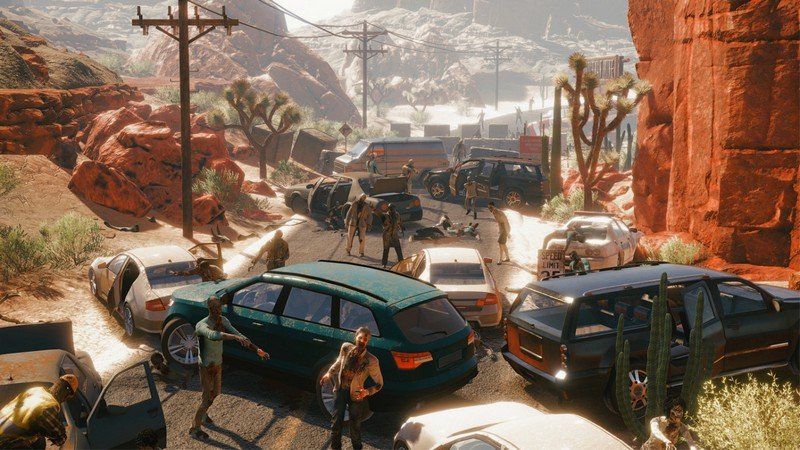 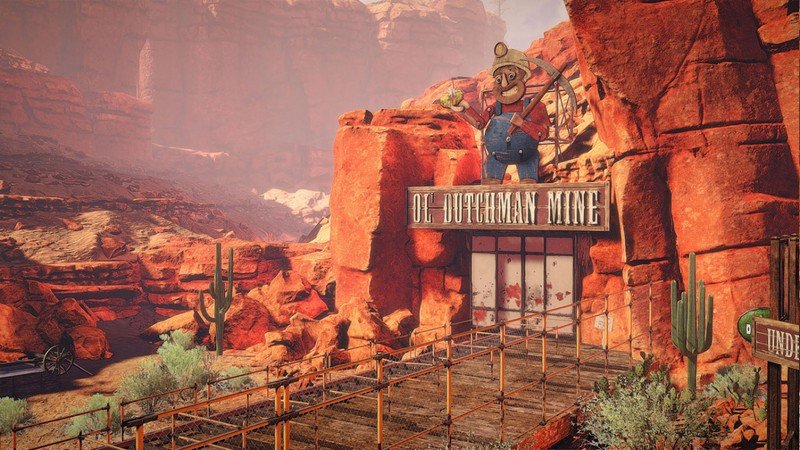 Virtual reality meets the zombie apocalypse! Arizona Sunshine is a first-person shooter built exclusively for VR that immerses you in a post-apocalyptic southwestern America overrun by zombies.

When you hear a flash of a human voice on the radio, your hopes surge – there are survivors out in the blistering heat of the post-apocalyptic Grand Canyon state! Armed with little more than your motion-controlled weapons and the scarce ammo and consumables you find along the way, you need to navigate the hordes of zombies coming for your brain in your desperate search for human contact.

Built exclusively for VR, Arizona Sunshine puts you in the midst of a zombie apocalypse. Handle weapons with real-life movements, freely explore a post-apocalyptic world, and put your survival skills to the test in VR – putting the undead back to rest is more thrilling than ever before. 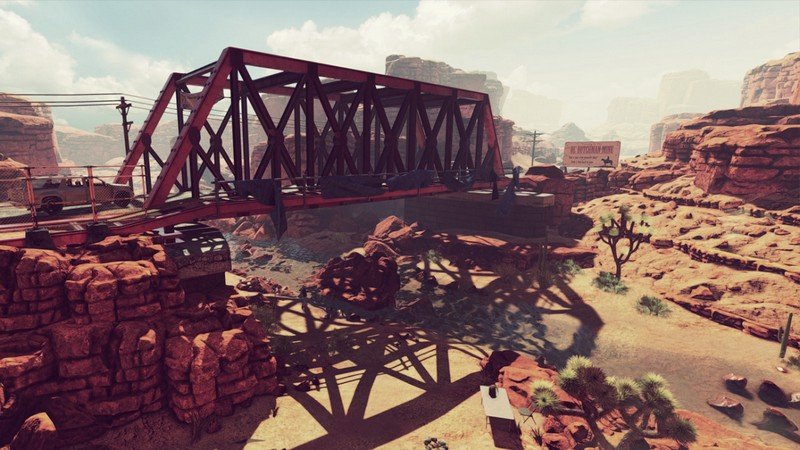 Features:
• Real-life weapon handling: Using VR motion controllers, handle 25+ weapons with real-life movements. Anticipate attacks, manage ammo and aim down the sights to blast your enemies to undead pieces.
• Full-size campaign: Built in bite-sized VR chunks that together form a full narrative, the campaign allows you to jump in for a short session or stay for the complete ride.
• Free exploration: Move around without restraints to explore a series of huge southwestern American environments, including treacherous canyons and deep, dark mines.
• Immersive zombie survival: Scavenge the environment, loot undead enemies and manage your ammo and consumables in a battle for survival more immersive than ever before thanks to VR.
• Co-op multiplayer: Join forces with a friend in co-op campaign mode or multiplayer Horde mode for up to four players. But beware, more warm brains mean more hungry undead.
• Unprecedented VR realism: When powered by an Intel® Core™ i7 processor or equivalent, Arizona Sunshine brings unprecedented realism to VR gaming with zombie mutilation, destructible environments, and an overall cinematic and immersive experience.
• Only in VR: Arizona Sunshine is a VR shooter exclusively built for VR. Step into the midst of a zombie apocalypse as if you were really there and take on the undead unlike ever before.
(also playable on Oculus Rift) 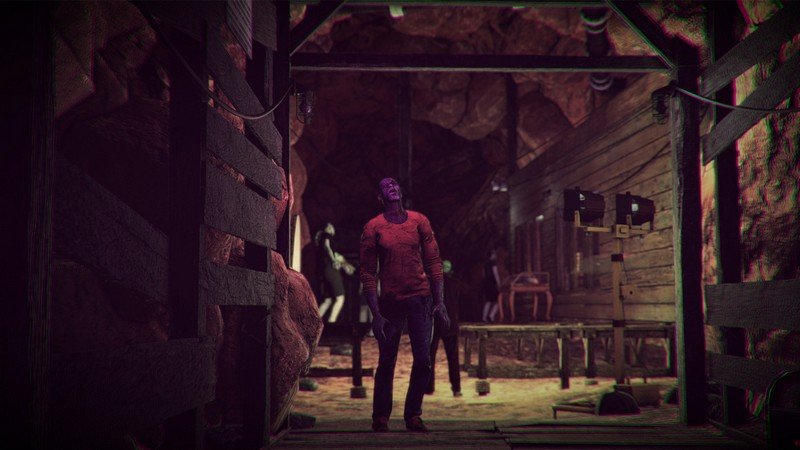 Jeff
Sep 12, 2019
★★★★★
This is a great VR shooter game, definitely for the $1 sign-up price. I love the humor and graphics on this game. Still, the game “forces” you into “stupid” moments where you end up doing things and say, “Um, i would NEVER be that stupid” and you’re fighting a HORDE of zombies until you die, they die, or you run out of ammo and die. The best thing to do is “out-think” the game. There are boundaries and there are places where you would (without a doubt) have a better chance of staving them off. “Think” your way into a better position when the game forces you into a “stupid” moment. And, trust me, after the first one you can just SEE the next ones coming a mile away. Scope out a good last-stand position and get a better aim. HINT – Leg shots are “almost” as beneficial as head-shots are and get ALL the guns you can carry 🙂

The mistake in this game was no melee weapons.

Logan
Dec 26, 2018
★★★★★
The whole reason I wanted the HTC Vive was to play this game. Truly the best GPS currently on the market for VR. Can’t say enough great things about it!! 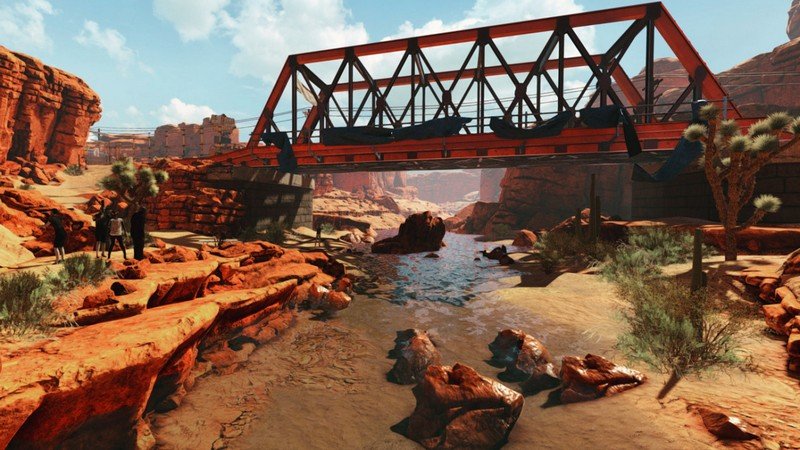 Game i had the most fun since my beginning with VR

Bennion
Aug 25, 2019
★★★★★
Pretty much my favorite game in VR so far. Teleport makes it feel like you can move as fast as you want to. The natural interactions with weapons and doors make it very immersive. It’s a fantastic world, and lots of fun. Looking forward to the next DLC. 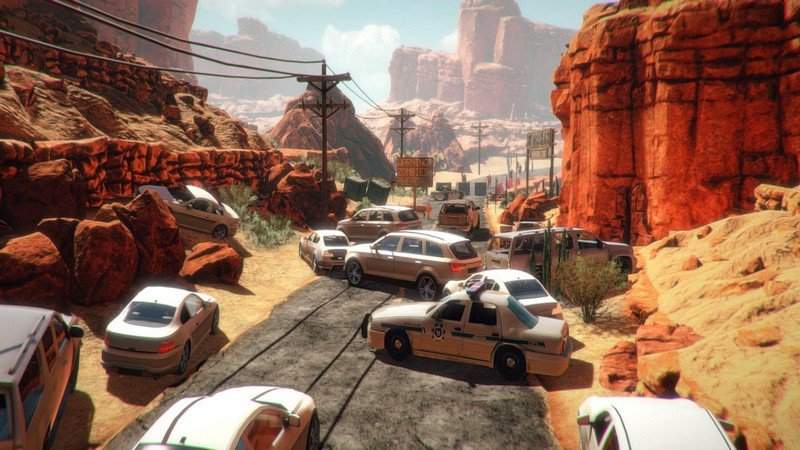 Kevin
Apr 11, 2019
★★★★★
An outstanding VR shooter! The variety of weapons is great. You decide whether or not you like a gun not just on the power or type of ammo, but also on how the sights are (just like real guns). There’s no giant laser pointing out of the gun, so you actually have to aim your weapons with the sights. A friend and I played through on hard difficulty our first time thorugh, and while difficult, we didn’t die often. I’d absolutely say the game is worth full price if you plan on playing horde mode on occasion.

Mark
Apr 07, 2019
★★★★★
Based on a true story. This is a must have for your VR Library. If you have ever spent any time in Arizona, You may have met a few of these Zombies but did not realize it at the time. Happy Zombie Hunting my VR Friends

Alex
Nov 18, 2018
★★★★★
Game is great. It is one of the few fullscale games out there. Not like others “hey look, we made something in VR, here is a static arena to play with physics a little”. No, you can navigate through levels, loot’n’shoot. You actually play it yourself, not just sitting there being entertained. By quality it feels like a good nonVR game from the end of 90s (I guess technology is just not there yet to catch up with modern nonVR titles)
Only thing that disappoints me is that no steam key was provided 🙁 But since I grabbed it on a sale for 1€ – that should do anyway 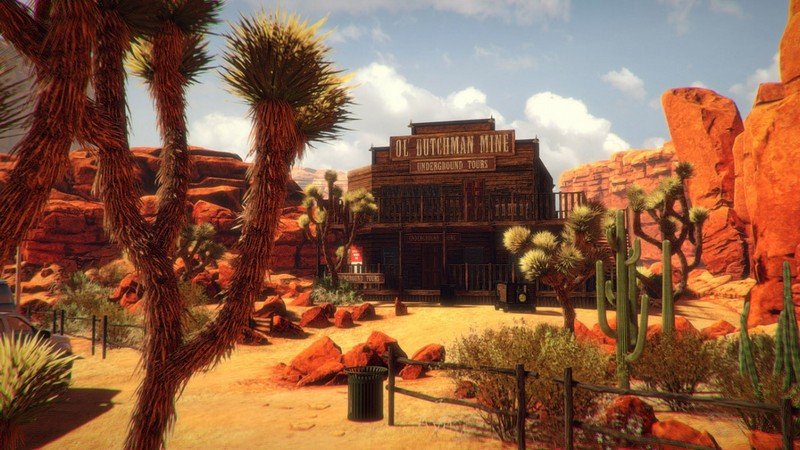 Mr
Nov 17, 2018
★★★★★
This game is a blast but make sure you have friends to play with. I can see myself plaing this game more then Beat saber and H3VR lol

Great game but multi is not working…i cant click on invite.i cant join game…..i have send message to vive and to vertigo….i havent answer for the moment

Sheldon
Oct 04, 2019
★★★★★
My mom was scared when she opened a car door. She screamed and quit the game when a zombie was coming towards her.

Movment is Teleport, is okay but i wish this Feed Trackig (Trackstrap) is Basic!

Zombies can Block the Movment Teleport, this sucks a bit, and make granate rdy and throw are not soo cool, maybe i need a bit more Training for the Hand Feeling!
(Grip holding and Pad using is not soo cool, this Slide a bit down and is bad Feeling for my Hands)

Steve
Mar 15, 2019
★★★★★
Awesome game, well worth to play if you love zombie games, this one makes you feel like your in it foreal lol. The guns are pretty cool too!!!!! This game is ther reason why i bought a VR

Greenlit
Oct 24, 2018
★★★★
All around, Arizona Sunshine has a lot of promise. The DLC so far has delivered more of the same great content and hopefully that means we can still expect to see more content release for the zombie shooter in the coming months. No matter which way you slice it, though, Arizona Sunshine is one of the smoothest experiences available for action fans looking to dive into the zombie apocalypse and it’s easily one of the first games I’d recommend to those looking for an intense and satisfying first-person shooter experience.

I played this game as an introduction to VR and I LOVED it. Amazing visuals and a good storyline, just a bit hard to do multiplayer as you have to share the weapons and ammo. Not really scary but it is funny to fing a 6 foot zombie appear behind you and give you a jump. The lighting is perfect, in the mine it is very dark, your flashlight feels perfect. There were some problems, mainly the fact that you can clip walls and be unable to move, while only seeing black, which is a bit frustrating, but manageable by physically moving away (it’s kinda hard to get the direction right). The survival is good to show people the game without them ruining your story. What I liked the most was one part where you mow down about 50 zombies using a minigun, which was satisfying and made you feel empowered.

Doug
Nov 17, 2018
★★★★
Great graphics and UI. Enemy variation is mostly cosmetic, no bosses, just swarms. Levels are pretty, but built simplistically on searching for a key or lever to progress. Single player campaign is very short, a few hours.

When I play this game, all the blood is green and the zombies look terrible. I did some digging and found out that viveport might actually be giving me the Chinese version of the game with infinity, despite the fact that I purchased infinity in America and have an American IP address. If there is a fix for this let me know because the gore is a big part of this game.

Jason
Oct 22, 2019
★★★★
Great game, runs smooth enough and the gameplay/story is great! The only thing I didn’t like was that it was censored even though the Steam and Oculus version of the game is not censored in my Country.

Sergey
Oct 12, 2019
★★★★
For me this was a super enjoyable game.
There is something very satisfying about shooting zombies at point blank and see their heads explode.
One of the best VR games I have played.

Couple bad (but not fun breaking) points:
1. Starting ammunition in the first level is too low. If you are just learning to shoot you will run out real fast
2. Right hand seems to sometimes loose the ability to grip from the holster. Dieing fixes the issue, but is very annoying
3. Grenades are a nightmare. Maybe it’s my Index controllers, but I have never thrown a grenade further than underneath my feet.
4. There are 4 weapon types in the game, but you can only holster two at a time and holt two in your hands. The ones you hold in your hand disappear when you zone between missions. More holster space would be handy.

MARKO
Feb 04, 2019
★★
I have to give it 2 stars, because I was looking forward to play this game and I played this game as demo before. Problem is 2 handed freezes at the end of level 1 when you walk through the gate.
And you have to alt+f4 game as it’s completely frozen……

Jan
Oct 30, 2019
★★
The controls aren’t very good, the weapons doesn’t work very well and you’re really just dropped it having to learn it as you go while zombies get closer.
I didn’t find it enjoyable.

Anders
Jun 29, 2018
★
Still not able to download and play the new DLC.
Also there has been a few updates to the game, which is no on Viveport.
I have now uninstalled it and bought it on Steam!

Igor
Mar 15, 2019
★
Authors remove censorship or replace trailer. You cheat the consumer, the contents of the game does not match the trailer. A complaint to the support service has already been sent.

DOES NOT SUPPORT OCULAS RIFT S

Bewarned. will not load so giving it 1 star. waste of down load.