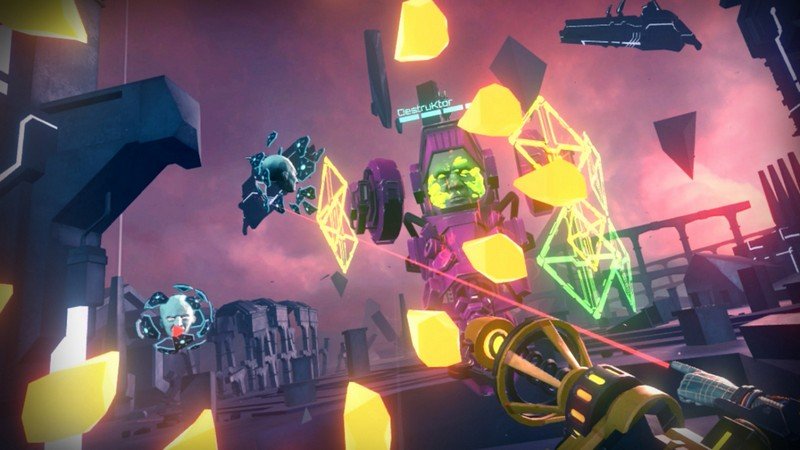 Released May 2018 3.8★
Blasters of the Universe is the first of its kind, bringing the bullet hell genre into first person VR. Build a bad-ass gun from thousands of combinations then get ready to duck and dodge your way through a shit-ton of bullets in this nostalgic – and nerve-wracking – VR Bullet Hell shooter for the HTC Vive.

BULLET HELL
You’ll need to physically duck, dodge, twist, and turn your way through hundreds of bullets. We scale the action dynamically to make use of the space you have available, so the more you move around the better!

Like in a traditional bullet hell game, the key to success is finding the ‘sweet spot’ to be in while the onslaught of bullets flies toward you. The only thing that can take damage in Blasters is your head. When you see a circle of bullets, often the best thing to do is to keep your head right in the middle and let the bullets breeze right by you.

You can also block bullets with your shield as a last resort, but it’s impossible to block everything. Avoidance is the best strategy, so start moving around your play-space and dodge those bullets!

ENEMIES
You will encounter a variety of enemies within Blasters that you need to dispatch. From fast moving ground enemies, to agile flying enemies, and deadly lumbering tanks. Each enemy will pose a different threat level to you, so you’ll need to quickly identify what enemies are the most important to destroy first.

BOSS BATTLES
Blasters of the Universe features a 4 level Campaign for you to battle through, each ending with an epic boss battle. In each level, you’ll battle new enemies, unlock new weapon parts and shields, and work your way towards glory. Each level also features an Endless Mode where you can fight for a high score on the leaderboards. 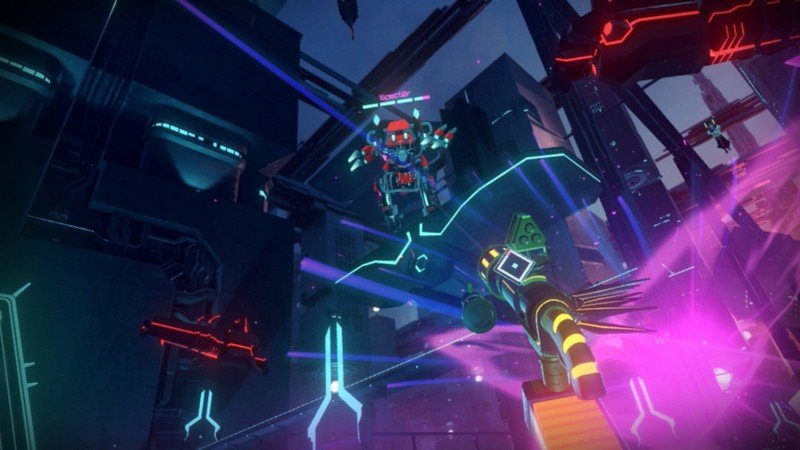 WEAPON CUSTOMIZATION
As you progress through the levels, you’ll unlock new weapon parts to take into battle. You can build a custom weapon that suits your play style and the challenges you face. Want a super-fast firing hit-scan weapon that deals poison damage to enemies? No problem. What about a scatter-shot cannon that deals explosive damage and arcs shots towards nearby enemies? Can do. With tens of thousands of unique combinations to choose from, you have the ability to create a weapon that perfectly suits your style.

SPECIALS
The Frame is the core of every gun. Each Frame in Blasters has a unique special ability that you can unleash to deal devastation to the enemies attacking you and help turn the tides during an intense battle.

These specials range from a bad-ass giant laser that melts anything it hits to a time-bubble that slows everything down and gives you the upper hand for dodging incoming bullets. Each special is unique and has different strengths that you can use to your advantage.

CHALLENGE MODE
Constantly updating Challenge modes with unique gameplay ensure there is something new and exciting to play every day. Compete for the top score in Time Attack, Endless, and Speed-run challenges that push you to play in unique and difficult ways.

Jagger
Feb 18, 2019
★★★★★
I’m not often one to review. But I had a lot of fun, and this game has little reviews- To make matters worse the 1 star reviews are all just “no Oculus Rift”. (Real review is 4 stars, but helping out the devs here.)
The game is hard. Very hard. I’m a very experinced gamer in general and in the Bullet Hell genre and “casual” felt anything but. Expect to re-run every level. 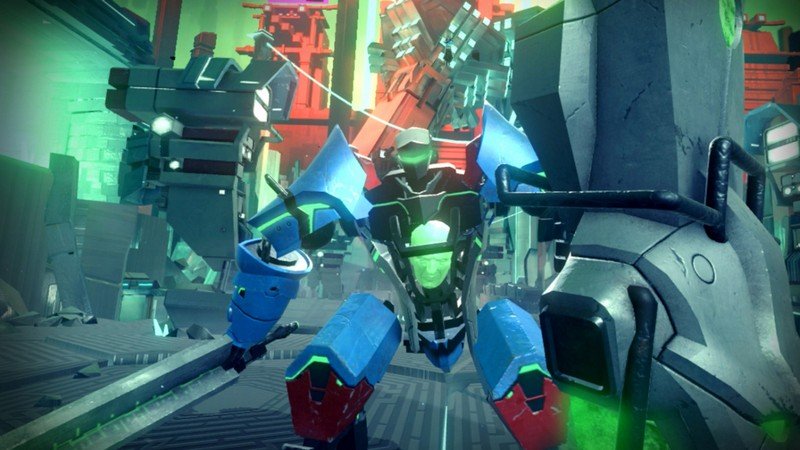 Pros:
+Nice direction w/ art style.
+Weapon customization is great.
+Feels like it belongs in the Bullethell genre.
+Antagonist is just juvenile enough to not be overdoing it.

Middle ground:
-+ Real hard.
-+ Prioriizing targets is a key factor, so while it’s user fault, “What just hit me?” comes up often. Shield your side!

CONS:
-4 Levels. It’ll take you a while, but still 4.
-After finishing, I wasnt interested in the challenges.
-Always in one spot, arcade-like ‘advance to next position’ would be cool.

scr2304
Jun 27, 2018
★★★★★
This game is the best game I have played on the VIVE so far! “Blasters of the Universe” is a fun bullet hell game that constantly makes you dodge, duck, swerve, and jump. It has difficult levels and the ability to make your own unique gun. It even has a little of comedy mixed in to the audio. The only people I would not recommend this awesome game to are people that can’t be constantly on their feet. If you like guns and bullet hells, PLAY THIS GAME NOW!

4 out of 5 stars, but a lot of the 1 star reviews just say “No occulus”, which are not really honest reviews.
So it’s 5 stars from me as a +1 for the developer 🙂

Secret
Aug 20, 2019
★★★★★
I’m sorry you’re having a problem with Blasters and for our delayed reply. We don’t officially support the Oculus Rift on Viveport but we understand the confusion because it is cross platform on Steam. Shoot us an email at blastersoftheuniverse@secretlocation.com and we’ll hook you up with a key for any platform you want that supports Oculus.

Andrzej
May 13, 2019
★★★★★
Very cool, hardcore gamer’s game that doesn’t deserve to be buried in the viveport trasheap of low rated apps. 1 star reviews about not supporting the rift. LOL THIS IS !!VIVE!! port kids, stop polluting this service please.

Juraj
Jan 29, 2019
★★
I’m not sure you understand the word “casual” in your difficulty level. I consider myself excellent shooter but this is just crazy hard. I managed to get only through the first two levels (barely).

The gun sucks, shield sucks more! And the projectiles are just irritatingly slow! It’s nice that you can build your own weapon, but you can build really crappy weapon very easily. Maybe you should offer some “pre-build” sets.