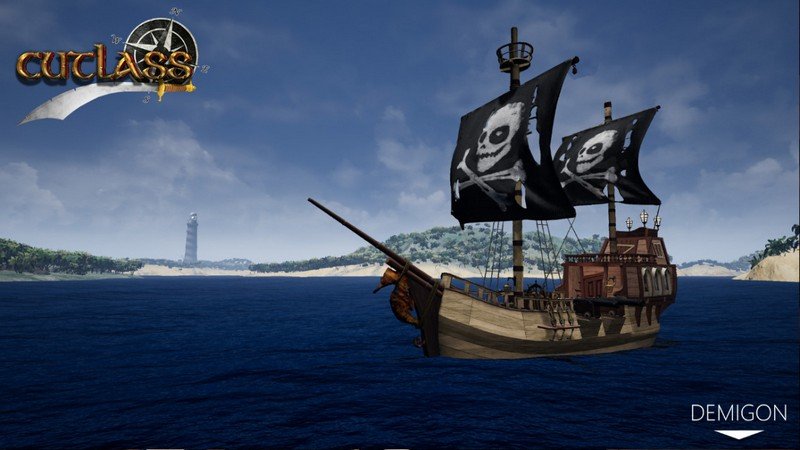 Released Jul 2017 2.2★
Take to the high seas as a swashbuckling buccaneer. In Cutlass, you are a pirate! Grab the helm to sail your ship around an archipelago, fighting off rival pirates with your cunning and broadside cannons. Try to beat your previous times in time trial mode, racing your ship through checkpoints to reach the finish line.

An HTC Vive is required to play Cutlass. 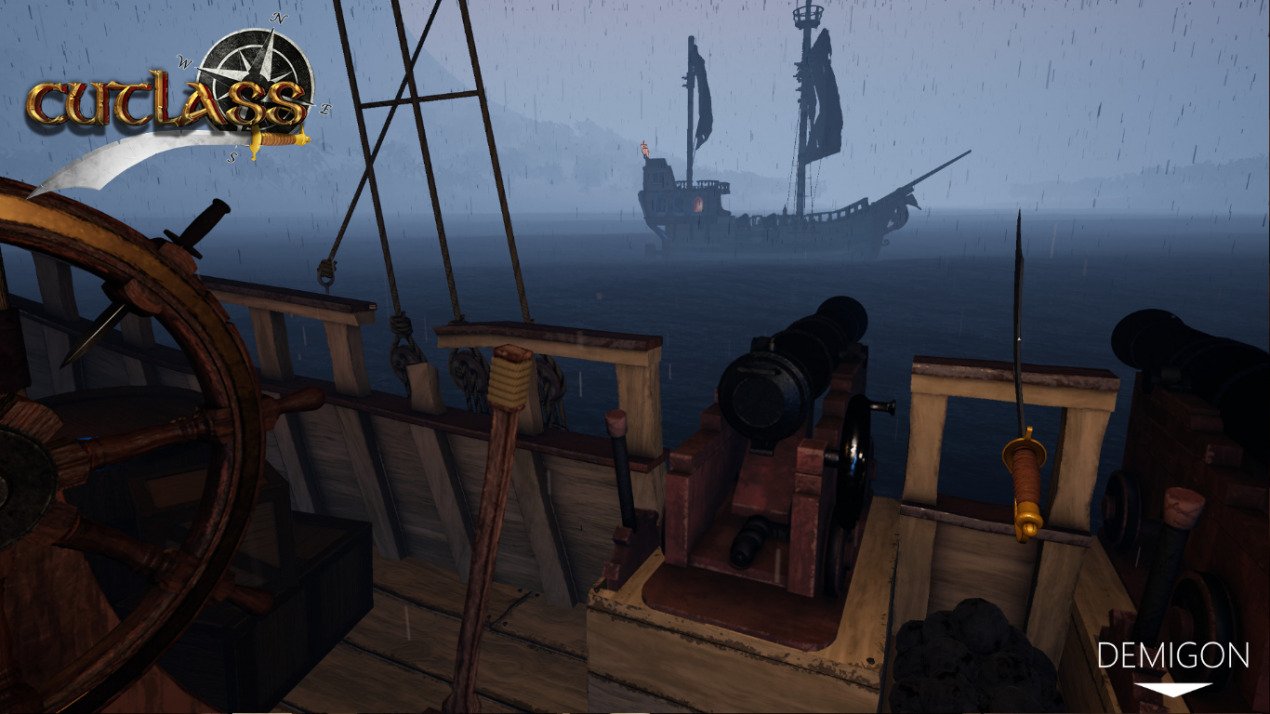 Features
=======
Ship control – You have full control over the direction and acceleration of your ship, to captain it wherever you would like to explore;

Naval artillery & warfare – Load the cannons, adjust the pitch and yaw, then fire at will! You will need to be strategic with the timing and trajectory of your cannon fire, to ensure that you sink your opponents before they sink you;

Day and night – The lighting and mood changes depending on the time of day;

Weather – The weather changes randomly. A Sunny afternoon can be interrupted by a thick fog, or heavy rain. Just be careful to watch where you’re going or you might scuttle your ship in shallow waters;

Time trial – Race through checkpoints to best your previous scores on a time trial course;

Ship simulation – Your ship’s buoyancy moves with the sea, which provides a uniquely new experience.

Uncle Russ
Oct 18, 2017
★★★★★
Great Game, I Would Recommend Getting This. Its A Great Simulation Of A Pirate’s Day On The Sea. I Play This All The Time and Its Absolutely Amazing! 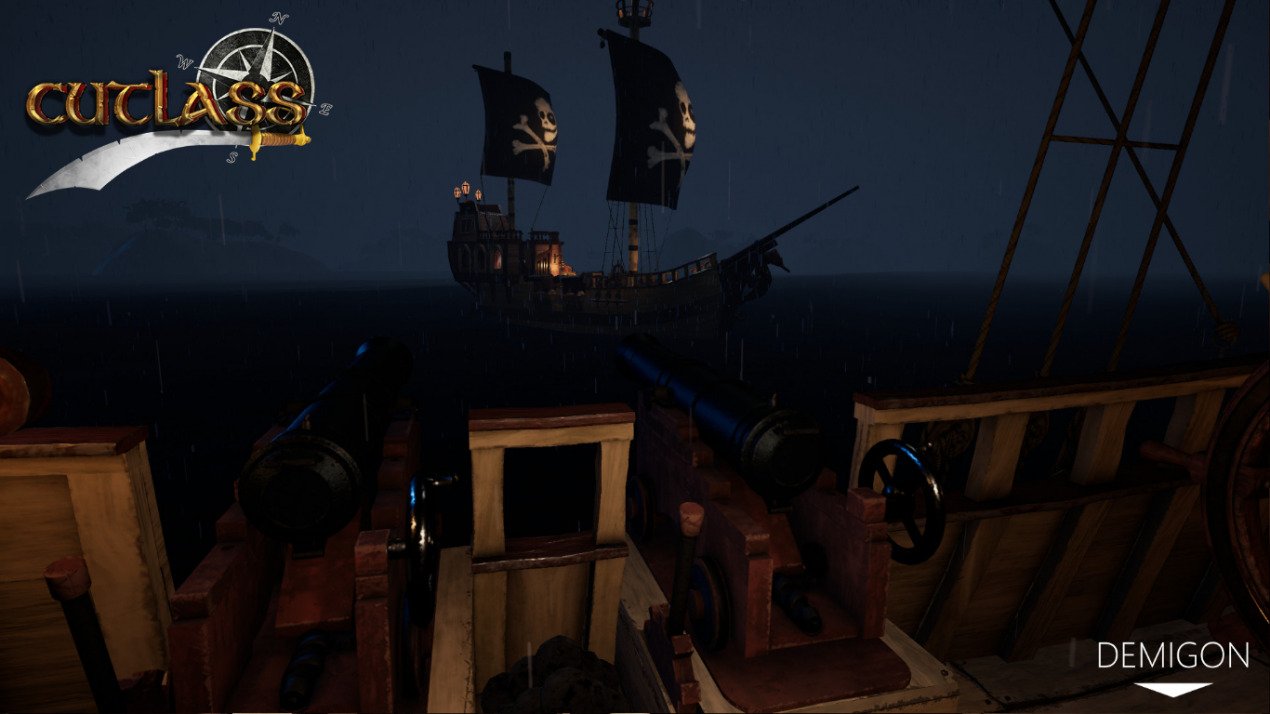 Tailwhip
Jun 17, 2018
★★★
The game was Fun. Steer the ship around islands and kill other pirates with your canons. need to time your shots with the waves and the time trail is cool.
Short around 30min but cool experience with the waves.

Double
Jul 29, 2017
★★
I didn’t much like this game. Being on a boat with waves feels natural in this game which is cool but I couldn’t find an enemy ship at night for the life of me. It’s also difficult to see if your cannons are hitting the ship or not.

samuel
Nov 19, 2018
★
To put it simply not really worth the subscription spot it took,the first thing I encountered was the scaling was off putting my steeling wheel outside my bounds so I never could reach the wheel so i never moved
I should leave some suggest to help/
1. Making the cannons fire as 2 a time would put the player on even playing field with the AI as they fire 2 at once when you only had time to fire one./
2. Fix the fazing water problem./
3. Try to my should the smallest room size can fit your boat so the /wheel cannon and cutlass are all easy to get to. /
4. Allow boarding so the player and AI can use their swords and it would give the game swashbuckler feel to it./
5. replace the stick with a hand and the hook it fine/
6. treasure! would be nice to give a more rewarding feel to sinking or plundering enemy ships/
i would give more but 900 charcters is not enough for a review

Most of the controls on the ship rely on the user grabbing and moving items/parts of the ship, such as a lever for speed, the steering wheel, lid for cannon etc. However when trying to move the steering wheel and opening/closing lid of cannon the game often seems to ignore the motion of the user, so opening/closing the lid becomes impossible as immediately after grabbing hold of it, it just moves the lid’s position by some amount instead of imitating the hand movement.

If the controls weren’t so bad it would probably be a fun little game. I have Vive Pro and do not have these issues on any other VR game in my library.

Jon
May 05, 2018
★
This is a cool concept but I was unable to actually do anything. I have the bare minimum for play area so some of the ship controls were outside my play area (I was punching walls trying to get to the steering wheel). Please add the ability to teleport/walk around the ship so play boundaries won’t get in the way. With this feature I would give it a 3 automatically and I’d imagine even higher once I experience it.