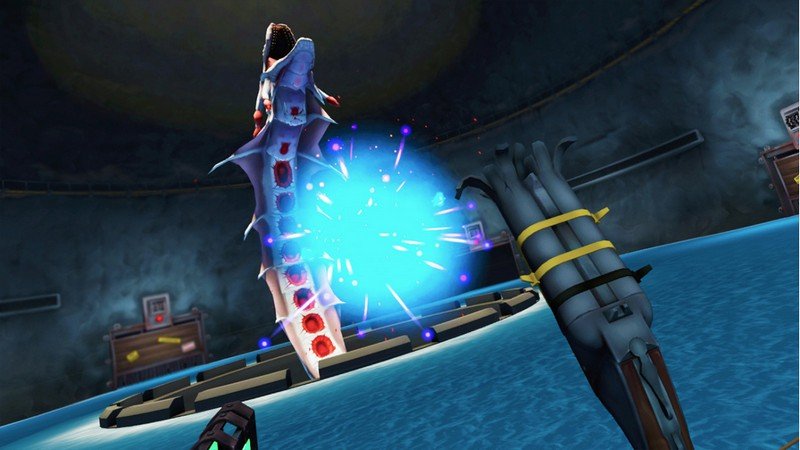 Released Feb 2019 3.9★
A toxic outbreak has been unleashed, mutating the wildlife in the local rivers and lakes! Pair up with your friends in co-op mode and take on the deadly ooze and its disgusting dwellers.

– New Epic Bosses:
Face off against new enemies on a gargantuan scale, including vicious piranhas, manic moles and even a giant enemy crab! 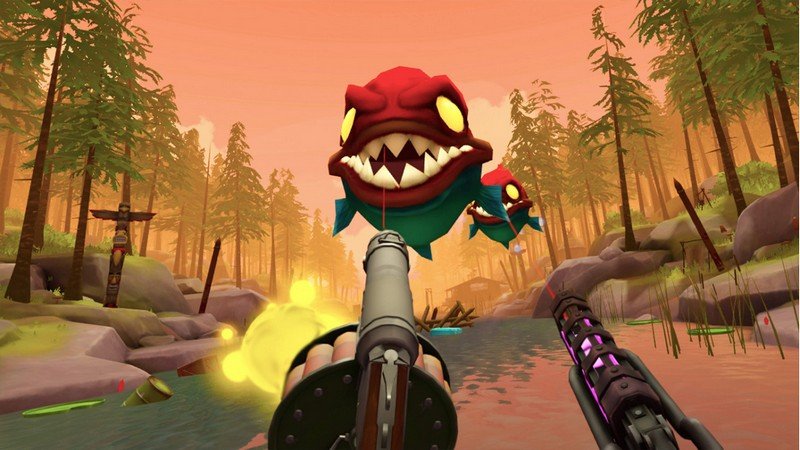 Hold on tight, this ride’s about to get bumpy!

Frank
Feb 21, 2019
★★★★★
Just like the first part of the game, this is a very solid arcade style shooter. It has hilbilly flair and you move down the river on a raft and shoot all kinds of animals that attack you and objects that block your way and earn money for every one. Each level has multiple stages, at some points you have to choose between 2 different stages by going left/right and at the end of each stage you can buy upgrades like new weapons, medikits, or boosts. The game supports multiplayer, which is pretty much like in AZ sunshine, so crossplay between viveport and the other plattforms should be possible (not tested yet) You can best describe this game as a mix of AZ sunshine and Zombie riot with a upgradeshop (NOT realmoney, don’t get me wrong) and auto movement. The gameplay is super easy to pick up, but it already gets challenging after the first level. Also there are nice bossfights in the game.

Kevin
Apr 27, 2019
★★★★★
This game was great. While at the beginning there isn’t a huge selection of weapons, as you progress and unlock more guns via challenges you get to choose your preferred combo and go through the levels with exactly the style you have the most fun with. I went through most of the levels with a friend and beat the final boss all on the hardest difficulty, which actually requires you to phyisically dodge the incoming projectiles instead of just shooting them down, adding another level of immersion and another degree of skill. It’s not long, and there’s little reason to replay any of the levels after your first time, but worth playing through at least once. More so if you have a friend, as you now have 2 weapon combinations to work together with!
Edit: Almost forgot, the humor is great. Some of the shopkeper’s lines can put you in a really good mood before the start of a level.

Jarom
Sep 07, 2019
★★★★★
A great cooperative on-rails shooter with really well done art. The big journalists did not do this game justice, condemning it solely for being a wave shooter in a wave-shooter saturated market. Of the wave shooters I’ve played this is among the most polished and among the few with online coop.

I’ve played through a bit of the game and despite the crude title, this game is surprisingly shy of obscene jokes. Whether you find that good or bad it does seem like perhaps they should have committed to one or the other. They likely turned off the more family friendly crowd while doing a bait and switch for those looking for more pervase humor. 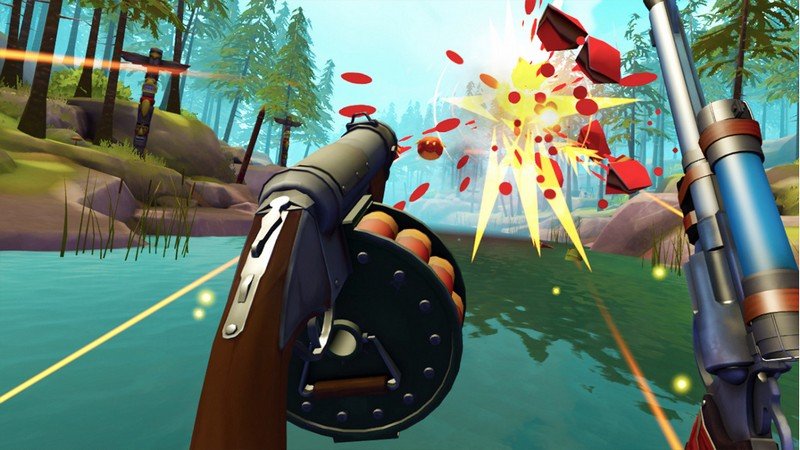 Mike
Feb 28, 2019
★★★★★
Excellent rail shooter, probably the best I’ve played. Guns feel good, no worrying about reloading, and tons of levels to play though. Each level has several checkpoints that let you level up the gun. None of the “power ups” feel substantial, but playing with different guns on a part you’re struggling with is half the fun. Definitely worth the buy, or at least rent.

Jeremy
Jun 26, 2019
★★★
Gameplay: https://youtu.be/LCROGmNgHlM
I found Dick Wilde 2 fun for 30 minutes, but a bit bland after that, with no hook to make me want me to return any time soon. Probably better in coop with a pal.

Philipp
Apr 27, 2019
★★★
Not my type of game. Frustatingly challenging, even on lowest difficulty. Experienced the gun sound effects to be annoying after a short period of time, because I tended to shoot all the time. Like the graphics and atmosphere though.