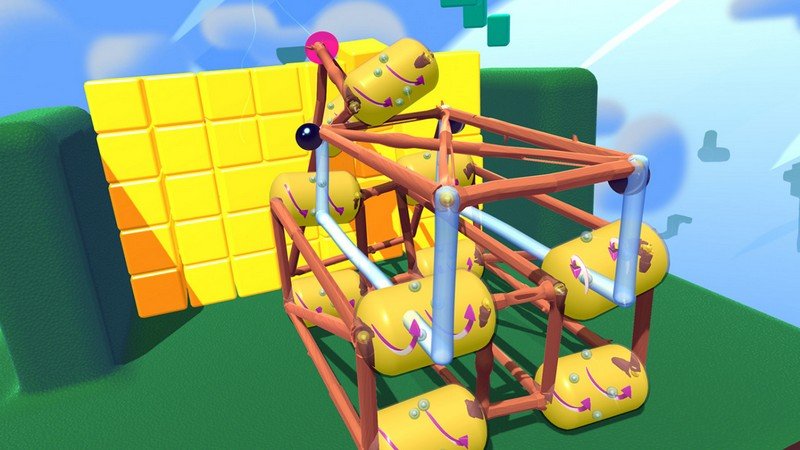 Fantastic Contraption is surreal building game for Vive VR. Create life-sized machines as tall as you can reach, then send them whirling, flinging, and trundling off to solve puzzles on the other side of a floating island. Your task is simple: get the squishy purple ball to that goal off in the distance, or above you, or on the other side of that gap. And your tools are elegantly minimalist: spinning wheels and stretchable rods. But the solutions are endless, and there are no right or wrong ones. We’ve designed this game from the ground up for room-scale VR. Come immerse yourself in a strange skybound archipelago and befriend Neko the photosynthesizing cat. Build contraptions with your own two hands, life sized and as big as horses, right there in front of you. Play with the physics, juggle pieces, throw darts, and feel another world all around you.
(also playable on Oculus Rift) 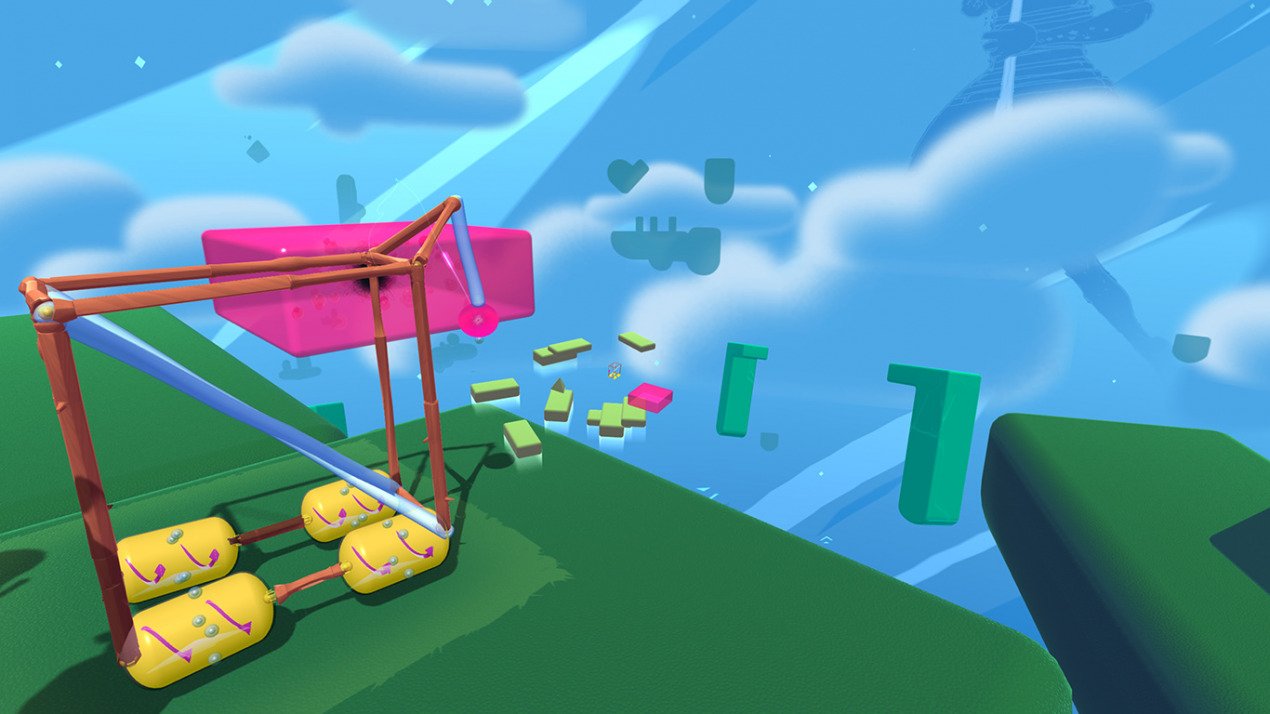 lightpower26
Aug 10, 2017
★★★★★
Awesome game! I’ve made sure it stays in my selection every month! Only had the game unable to run for a day when I realized a restart would fix it. It uses the scale of your room pretty nicely, putting the “progress level button” in a corner of your play area.

Jean-François
Jul 19, 2017
★★★★★
Awesome game that lets your imagination build whatever it wants to reach the goal. Great sandbox game!

Sascha
May 26, 2017
★★★★★
Fantastic Contraptions is (currently) one of the few excellent games that actually make you come back and play it more.
The in-game play area is roughly the same size as a typical HTC Vive play area (in the real world), so you feel immersed during the entire experience.
While level difficulty varies, I’ve so far enjoyed each and every one of them.
I would love to see more content for Fantastic Contraption, maybe more capabilities and game mechanics.

The puzzles are interesting and the game has a cute style to it. I had a lot of fun playing this game and I hope there are more games like it in the future. 5/5.

jason
Apr 28, 2019
★★★★★
This game is super fun. Lots of neat little features, and the puzzles range from easy to frustratingly difficult. And the way you solve the puzzles seems to be nearly infinite. Exactly what you want out of a puzzle game.

I had a slight issue with one of the early stages, but it was my own fault. They let you edit levels and I edited one and couldn’t figure out how to get it back to normal. But again, that’s completely on me.

So far though, it’s been great fun. I think it’s more fun seeing the number of ways I can fail at completing the levels. This has got to be one of my favorite VR games so far. Right up there with Beat Saber, although much more relaxing. 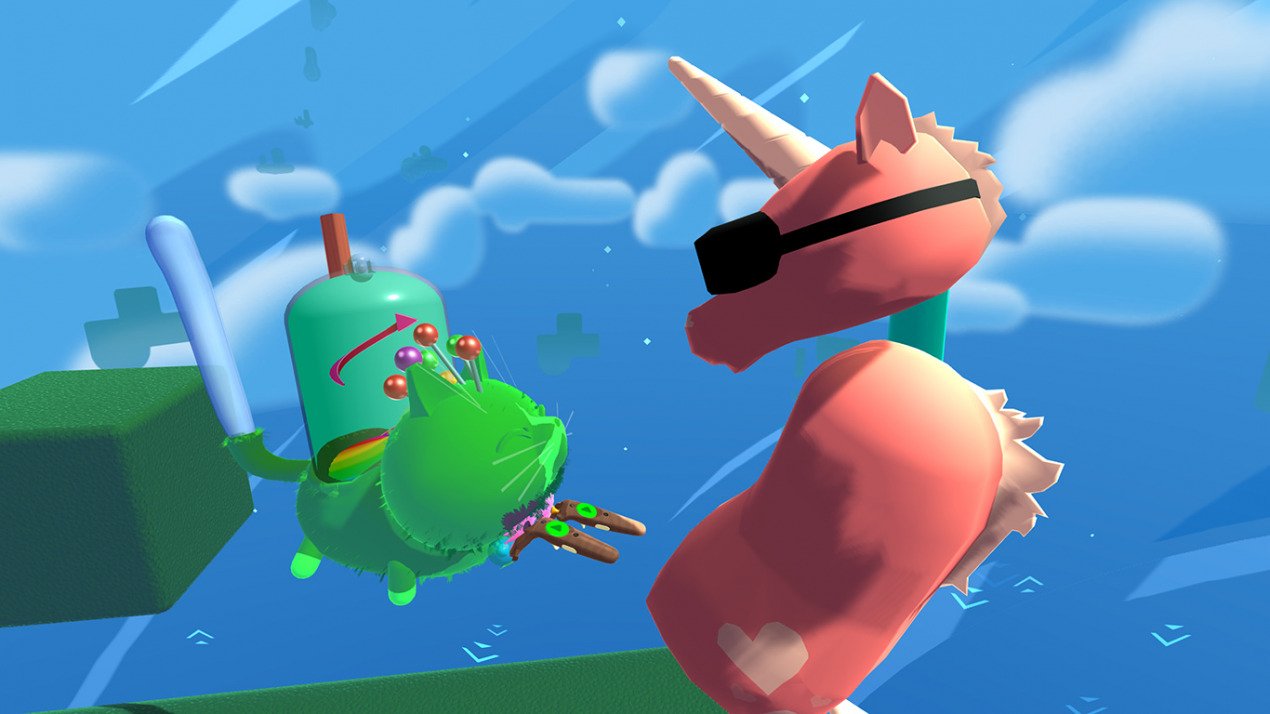 Ben
Apr 27, 2018
★★★★
Inventive and great use of precision control in VR – as mentioned by other reviewers the helmet menu is awesome, not so sure what the creepy artwork on the environment map is all about though.

Does get quite repetative and could explain the elements a little clearer, but a fun game and worth a look.

Lukeristli
Mar 13, 2017
★★★★
Used to play this game on the Browser a number of years ago when it was on something like Miniclip etc…

Was a brilliant game and spent many hours playing it.

Decided to purchase it for VR based upon my previous experience and it being a VDA Winner.

I have given this game a 4* review based upon the following:

Pros:
The ability to immerse yourself in this game for hours upon end.
There is no limit to what you can create – It may take time to figure it out but it really is brilliant.
The graphics are pretty awesome and very well designed.

Cons:
For the price tag of £22.99 – I would not recommend it. I was suggest £14.99 as an absolute maximum for this game.
Plenty of space required – To play this to its full potential, you really do need a lot of room which most people do not have.

Overall the game is brilliant and will be spending plenty more hours on here – Highly Recommended.

That being said, the tutorial seems to end a bit early (what are the blue sticks?). Perhaps could do with introducing you to the way they want you to hit the high and fallen over the side targets.

Also ,with three pieces, it doesn’t seem like it’s much of a game, just a reassemble the same sort of thing.

Josh
Jan 22, 2019
★
I really wanted to like this, the premise sounds so fun and open to everyone. But it just never worked right for me. My two biggest issues are 1) it always had the level facing sideways to my cameras. So tracking was almost always an issue. 2) the buttons never matched the tutorial buttons.

The game setting is almost non existent. I spent more time trying to figure out how to set this game up so that it was playable than I did playing. After playing just two levels I knew the game could be fun, however the settings made it unplayable.

VIVEPORT User
Aug 18, 2017
★
Game started off and I had no idea what to do as there was no tutorial. I sat there for like 10 minutes accomplishing nothing before I got bored and didn’t care anymore.

DEADGOAT7
Jun 04, 2017
★
It doesn’t work guys. Keeps crashing when you have completed the first few levels, and get into the menu.

Ford Fairlane
May 07, 2017
★
I only managed to start this game once. It seemed like fun, but when I tried to launch the game 1 week after the first attempt it keept crashing nomatter what I tried. Sad – seems like a good idea, but bad execution

BaDaBingDK
May 01, 2017
★
I got this game from the Vive suscription. I started the game and immediately fucked up the scaling of the playing field, making it way up in the air, and was not able to figure out how to change it.
I made do with what i got and made my way to where you could go into the menu by putting on the helmet.
Inside the helmet menu there are a clusterfuck of objects you can do god-knows-what-with.
I found and put on a mask that led me to a level builder.
I never found a way to make my way back to the menu.
The mask would not come off again.
I tried to close and re-open the game, that started me in the level builder again.
After pushing all the buttons in many different combinations, without any luck.
I then gave up and closed the game for good.
I don’t like giving negative reviews, but i felt that this was the only way to let the devs. know about my experience. 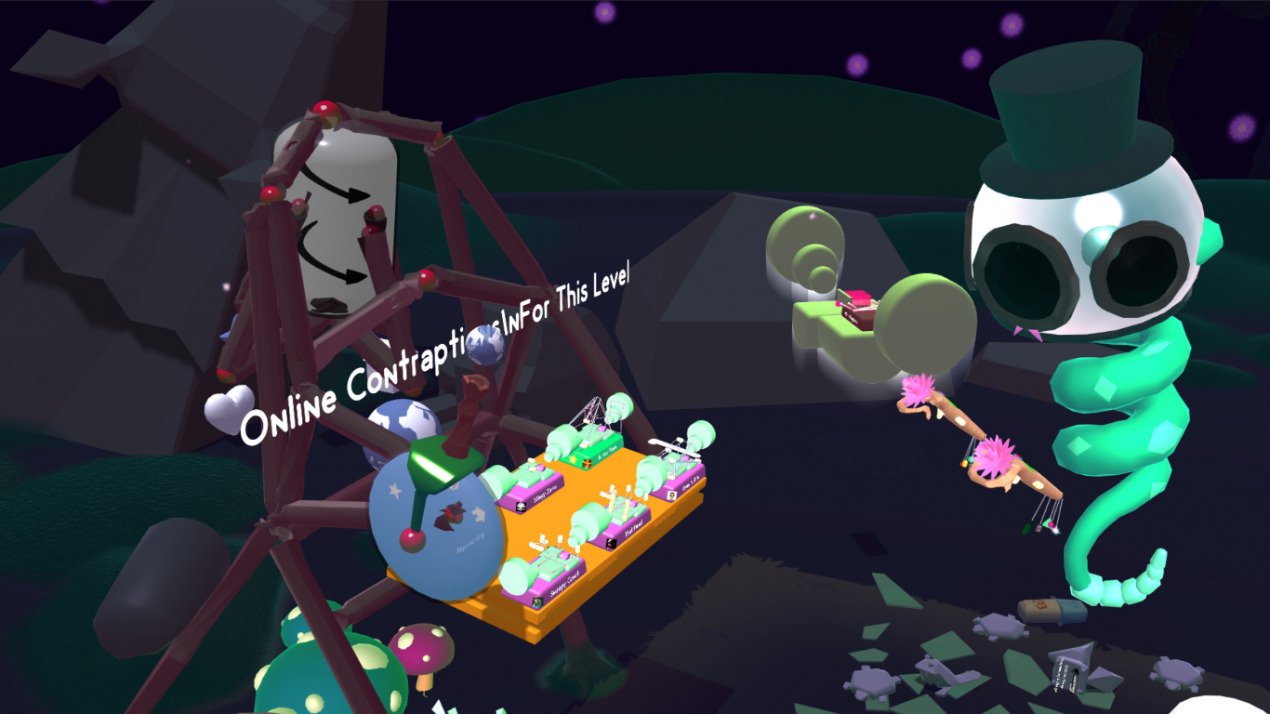 BODYPRINT
Dec 28, 2016
★
Contraption somehow slides out of bounds. No way to get it back?
What do the blue stick do?
Poor tutorial.

Tomasz
Apr 16, 2019
★
Unfortunately, unplayable on Rift due to messed up controller remapping 🙁 Such a shame, loved the original and wanted to try the VR game really bad.