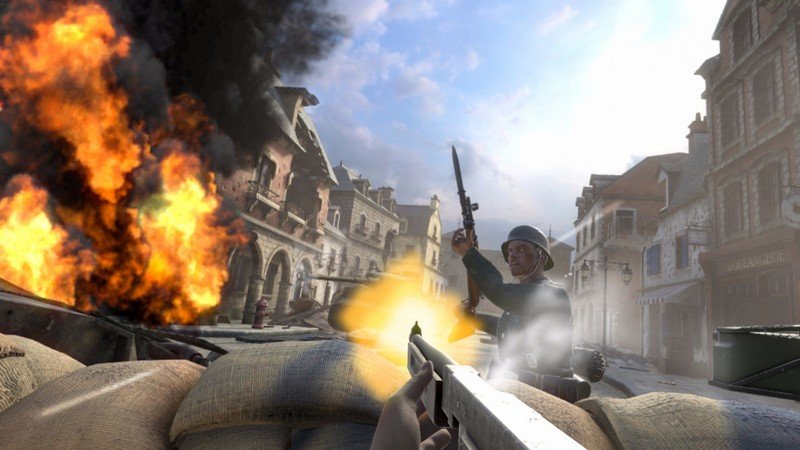 Released Jun 2017 3.7★
Created by Vive Studios’ first-party developer Fantahorn Studio, Front Defense is a highly polished, arcade-style room-scale VR shooter set in the final days of World War II’s European theater. The invasion of Normandy is over. The fiercest firefights of the war have just begun. Front Defense immerses players in the role of an Allied Forces hero fighting the last relentless onslaught by the Axis in a fictional European town. Hunker down behind well-armed positions as you duck, dive, switch and reload weapons, throw grenades, and man-mounted guns to fight back the enemy assault. Use heavy weaponry against increasingly brutal enemy soldiers, arm the Bazooka or call in airstrikes against armored cars and heavy tanks, and man the thunderous 50-Cal to take down suicidal Stuka dive bombers. From the opening salvo, Front Defense uses the power of VR and the precision of Vive’s room-scale to deliver one of the most intense war shooter experiences ever created.

Key Features:
• Experience an intense WWII shooter as never before in a superbly polished game designed explicitly for Vive’s room-scale VR and precision tracking
• Defend strategic positions in a beautifully detailed European town slowly being destroyed by a brutal enemy
• Seamlessly switch between a variety of weapons, from light and heavy firearms to mounted machine guns
• Use Bazookas, grenades or call in airstrikes to take on an entire armored division, from well-armed infantry to armored cars, tanks and dive bombers
• Take on the mysterious Axis super weapon in an epic boss fight finale
• Increasingly challenging stages and global leaderboards deliver hours of game play and high replay value
(also playable on Oculus Rift) 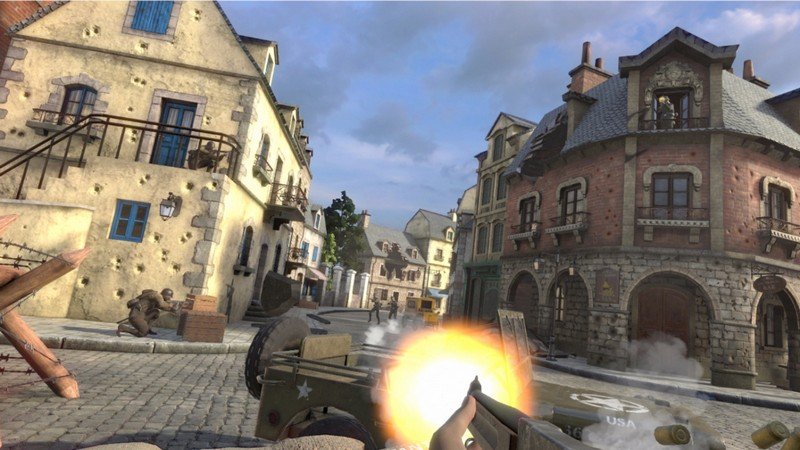 Space
Dec 02, 2017
★★★★★
An excellent game, one of my favorites for some casual fun. the game really only takes a few rounds to get used to (Sniper on the first level is the worst part) however once you’ve got it down its addicting. Small critique would like to be able to raise the sandbags or lower my standing height because you do have to be on your knees to be in cover and that kills your knees after a while, Still excellent game.

Dude
Jan 27, 2019
★★★★★
It took some practice to figure out the weapons. Getting the grenade on the left side of my web gear is still awkward. Otherwise, it has been a lot of fun to play.

GunnerKS1
Nov 21, 2017
★★★★★
One of the better VR games I have tried, looks great and lots of fun. When family visits this is one of the games they like to play over and over. Funny watching friends and family hiding behind the sandbags for cover then try and lean on the sand bags when standing back up, very immersive. Like the mechanics of having to reload the weapons, adds to the immersion.

Lace
Sep 01, 2017
★★★★★
Just got my Vive yesterday so I am new to VR but I gotta say this is one of the best games I have tried so far. Very fun. It feels like you are in the game and runs very smooth compared to some other games, there is alot of detail. The gernade throwing (well having it go where you want it to) is a bit tricky but everything else worked great. I definitely recomend trying this out.

DGxShAdOwZz
Nov 02, 2017
★★★★★
Played this game for a breif moment, was actually really fun, the 2mx2m area is still abit big for my room at the moment so i cant reach some things but i still had alot of fun playing it

FDR
Oct 11, 2017
★★★★★
Best ragdoll gun shooting game with a little bit of blood splatter, I highly reccomend turning off the healthbar/score in the options as it really turns it from arcade feel to saving private ryan… oh and the helmet is a nice touch

If you like shooters this is a good grab, I hate wave shooters just cause they are all the same, but this one has some nice variety and you can get some pretty memorable kills while duck jumping behind sandbags.

Tony
Jul 28, 2017
★★★★★
I’m still only on the first level, but this is my favorite VR game so far. I may be slightly biased because I have a fascination with the WW2 era. But I don’t mean to take away from the game play at all, which is great. I feel immersed when I play it and I sweat even from squatting at my bunker and moving between the kneeling and standing positions to take shots at “Jerry”. All in the hopes of making the world safe for democracy…

Ian
Jul 09, 2017
★★★★★
This is not Call of Duty in VR, but it’s a great arcade wave shooter. I’ve only played level 1 so far but I’m very impressed. The first 30 seconds are wonderful – buildings being shattered all around you – and game experience reminds me of “Brothers in Arms: Hell’s Highway”. Friendly NPCs call out targets like “in the window!” and it’s very effective. I was excited to check this game out and was not disappointed. I do usually die by dropping a magazine or something (classic VR fumbling), but that happens in Raw Data and Sairento too. The technical quality of this game is very high and the attention to detail is one of the things I like the most, for example shooting out individual window panes. I’m playing at maximum room scale and use all my space (not to mention playing the entire game on my knees because I’m crouching in cover). Anyway highly recommended. Thanks developers!

VIVEPORT User
Jun 30, 2017
★★★★★
Cant lunch game,when clicking to open the game, on scren starts to load but in HMD still Steam Home app is running.
Tried to close steam and then open vive destop, then open the game , but still the same, running in background and nothing in HMD.
Please help.

Finding
Aug 12, 2019
★★★★★
Lots of enemy and a variety of weapons to kill them with. My tough 16yo nephew played it and actually screamed when a soldier ran up on him and killed him with his bayonet! SO FUNNY!! Taught him that war is a scary place to be!

Greenlit
Jan 04, 2018
★★★★
Front Defense is a wave-based game that throws players into the shoes of a soldier on the front lines. Tasked with defending against oncoming waves of enemy troops, players must use everything in their disposals—from assault rifles to grenades to rocket launchers—to hold off the incoming assault and defend the point. It’s a basic premise that works well, and Fantahorn Studio has done a great job showcasing the strengths of room-scale VR with the HTC Vive.

Bash
Sep 03, 2017
★★★★
This was a lot of fun! Some items were just barely in my play space and I had occasional trouble re-loading and picking up a few things off the ground.
But overall, I had a lot of fun. Throwing grenades and firing the machine gun was great! 🙂
Great fun, just needs a few more tweaks I think.

Doug
Aug 19, 2017
★★★★
Hi! Game looks great but the machine gun is outside my play area by about a foot. I can’t reach it. I set the game for a small play area, but it wasn’t enough. Any other settings I might adjust?

Swagelin Jones
Jul 30, 2017
★★★★
[Got this on subscription]One of the best shooter VR games. In this game you are in a bunker and you have to defend against waves of enemies and you have a variety of weapons to use(submachine gun, pistol, granades, bazooka, and machine gun/.50 cal (last level)). The only thing I don’t like about the game is how predictable it is. The soldiers come from the exact same direction, this is noticable at the begining of each level because I know when and where the soldiers will pop out from.
Also notice you need 12gb of memory. At the moment I only have 8gb and its playable, but on the 2nd and 3rd levels it will sometimes lag because it needs to load from the hard drive, and even then it only lasts a second.
I hope they add more levels, then I might buy it! 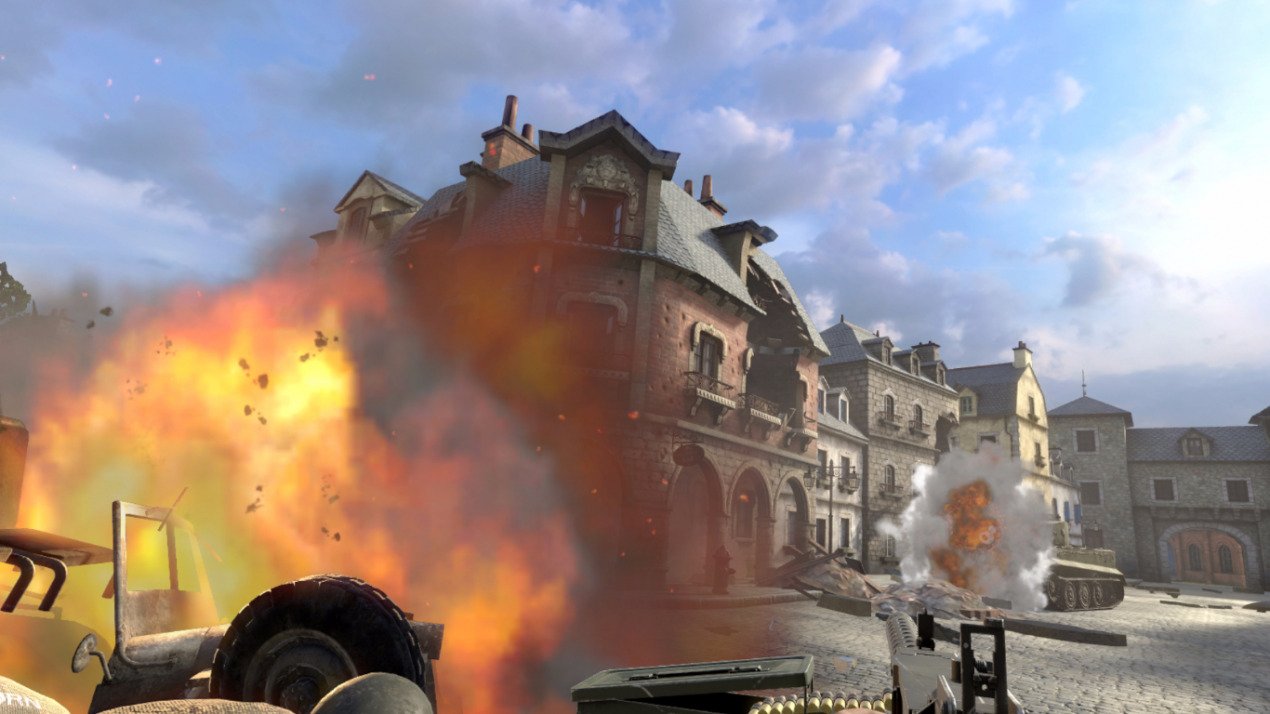 Fil Arkonus
Sep 25, 2017
★★
Sadly I found this game very buggy. When operating in large space mode I often find I cannot grab ammunition. While in small space mode I started getting an odd glitch where I would keep letting go of the machine gun for no reason. Both these issues made the game unplayable when they occurred.

Other than the bugs the game is pretty good. I like how the weapons function and the game is well designed to make use of room scale movement while avoiding the teleport/nausea dilemma when trying for larger movement. It could however do with some difficulty options (Both easier and harder modes).

Ultimately though the bugs coupled with it being a pretty difficult game anyway with long load times to boot made this an exercise in frustration for me.

Gabriel
Apr 03, 2019
★★
What a disappointment.
Start with poor hand models and menues, bad impression to start with.
But what made me dislike the game is mainly two things: the very simplistic weapon mechanics makes very little use of VR potential, I was expecting Pavlov mechanics and this is not even starting.
Second, being locked in a square where you have little cover and have to shoot two handed because you’re being surrounded is very unrealistic and has no strategy for the player to use.
Add that the hand keeps loosing grip on the big SMG, add no recoil (part of the bad weapons mechanics)
Very poor game design, very poor experience, highly disappointed, I thought I could get a refund like on steam and couldn’t…
This game will never be good, even with improvements is a very simplistic shooter.

Thomas
May 18, 2019
★
Below average gameplay. the controls are extremly finniky. Download Zero Caliber and it you will have alot more fun.