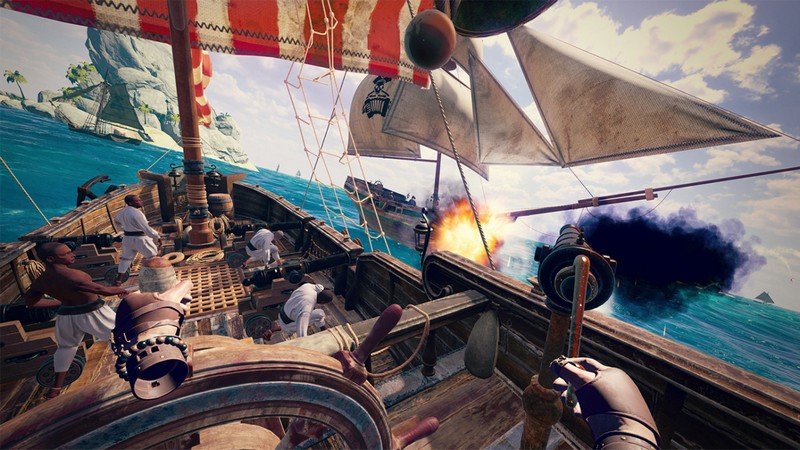 Released Oct 2018 3.9★
Furious Seas puts you in command as captain of a deadly pirate ship. Navigate through treacherous waters and blast apart fearsome enemy fleets in this thrilling VR adventure like no other. Carve out your legend today amidst the Furious Seas.

FEATURES
💥 Single-Player Campaign – Face off in naval combat against an energetic cast of pirate villains and the dangerous fleets they command.
💥 Survival Mode – Test your pirate skills to their limits in a pulse-pounding fight for survival!
💥 Online Multiplayer – Play with friends and conquer the seas together, or battle it out in an epic high seas battle. (NOTE: VERY early work in progress.)
💥 Exploration Mode – Explore the seas peacefully or make a name for yourself as a fearsome pirate. (NOTE: Early work in progress.)
💥 Stunning Water & Detailed Ships – A must-see in virtual reality!
💥 Be a Pirate Captain – Grab hold of your ship’s wheel and fight your way to victory.
💥 Command Your Crew – Direct your pirate crew to operate the sails and fire at enemy ships.
💥 Comfortable VR Gameplay – Seated and standing accessibility options and easy to reach controls.
💥 No Seasickness – Lots of attention and care went into eliminating sources of motion sickness that one might expect.

Furious Seas is an Early Access title in full development. Community feedback is welcome and will help shape the future of the game. Vote on what you’d like to see next on our interactive roadmap: https://furiousseas.canny.io 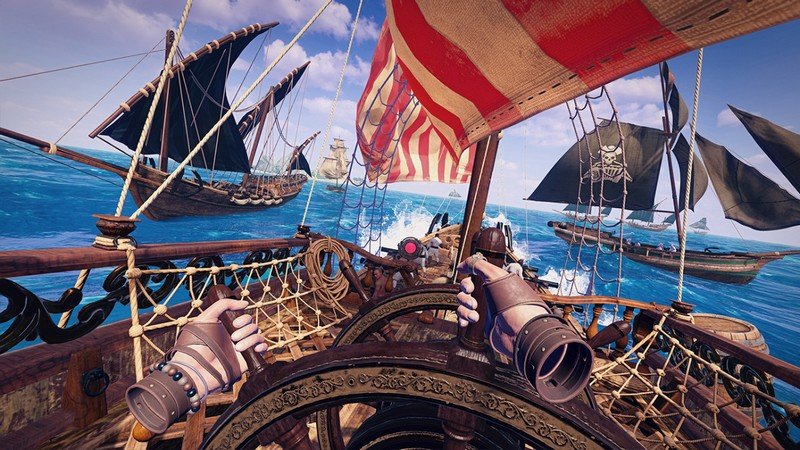 solansky
Mar 08, 2019
★★★★★
Wow what a game play, extremly well done for a early release. Would love to see in the open map time of day changing and some animals. Can’t wait for the later missions !

Scott
Dec 11, 2018
★★★★★
Fun as heck Im gripping a controller trying to hold a turn with the wheel while positioning the cannon with the other… it gets exciting

Josh
Oct 22, 2018
★★★★★
I picked this up through the subscription because it looked interesting, and i’m glad i did. I’ll say flat out i was very impressed right off the bat, the controls were a little different than i’m used to but tbh these controls only helped increase the immersion. The game looks kinda small right now, at least from what i played, but looks like a really solid game. And one of the better games i’ve tried on here.

Warp
Nov 26, 2018
★★★★★
That was a whole lot of fun! Very much enjoyed this early access, didn’t feel any nausea either (although I always had pretty good sea legs). The sort of game that would be excellent for multiplayer, with crew members firing the other cannons and actually pulling ropes etc. 🙂 Great job so far guys! 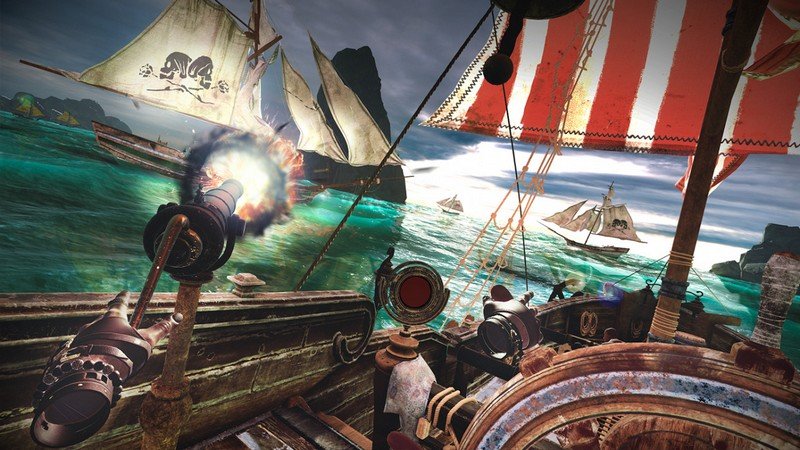 Jochen
Nov 10, 2018
★★★★★
Great experience: this is a wet dream! Look at the feature list, it’s no seaman’s yarn. These coders follow the pirate codex – and Disney Quest. Excellent approach to standing/seating locomotion. Tons of explosive fun! Clap on all sails (graphics can be demanding for skippers coxing a low-end system)

jason
May 01, 2019
★★★★★
I can’t wait for more content updates. This game plays great, looks amazing and is tons of fun. The water realism is outstanding, and the game mechanics work out really well. It’s not the longest VR game out there, but everything in the game at this point is well executed.

mariosbikos
Apr 07, 2019
★★★★★
Really simple and nice mechanics that allow a fun VR experience. I really loved the ship movement in the sea. You don’t get any nausea at all!

John
Dec 20, 2018
★★★★
A lot of fun. I haven’t gone far enough yet to say if the gameplay varies very much (hence the 4-star rating which I may revisit) but if you enjoyed the sea battle parts of Assassin’s Creed Black Flag then you will get a real kick out of this. Good fun!

Dave
Nov 23, 2018
★★★★
This game is really fun! The way you can control the ship with one hand while firing the cannons with the other really elevated the gameplay and immersive element. I can’t wait to see what they add in the future, the ability to go on land and search for treasure or board ships would be difficult but would really make this game go next level!

Eric
Feb 18, 2019
★★★★
This game is amazing and I also believe that traveling on small islands or even travel on enemies boat (with a rope feature) to fence the other captains would bring this game and VR on a completely other level. I can’t wait to see the new updates and final game.

I would recommend this game to anyone and I wasn’t seasick (motion sick) either.

Shaun
Nov 13, 2018
★★★★
Best VR pirate game yet! Simple but addicting mechanics, beautiful graphics (think Sea of Thieves for VR minus the walking around) and hilarious bosses. I am really excited to see where the developers take this game. Only reason I didn’t give it 5 stars is because it is not yet complete, but I am eagerly awaiting a full release with my finger on the button to give it that last star.

Stuart
Oct 09, 2019
★★★★
Good game on the rift s . There are too many tracking issues with the vive cosmos. Your hands get stuck to the wheel making the ship impossible to steer.

Works great on the rift s. hope vive sort out the tracking issues with the Cosmos soon

Matthew
Apr 27, 2019
★★★★
Beautiful water. Good hit boxes (aim at their sails, trust me). Complex control scheme where you learn to keep eyes in the back of your head. The only downside is my fingers cramp trying to hold onto the wheel and gun. Maybe there’s a toggle setting, maybe not, I dunno.

Nasty
Apr 08, 2019
★★★★
It’s a really fun game with great mecanics. Only gripe with it is the cannon controls, if I try to point in to the front of the ship, my face is literaly on the cannon and my hand is far away. Maybe a tighter mouvement to control the cannons without sacrificing precision would be really fun.

I recommend this game to anyone who wants to try it out.

Mike
Jan 10, 2019
★★★
It’s a fun little experience, but after the early access was up (which wasn’t long…maybe 20-30 minutes?), I was pretty much disinterested in playing it more. Might appeal to a niche, but there was nothing really hooking me in. With that said, it’s a fairly polished experience even though the voice acting is hilariously bad. Worth a subscription rental if you have one to spare. 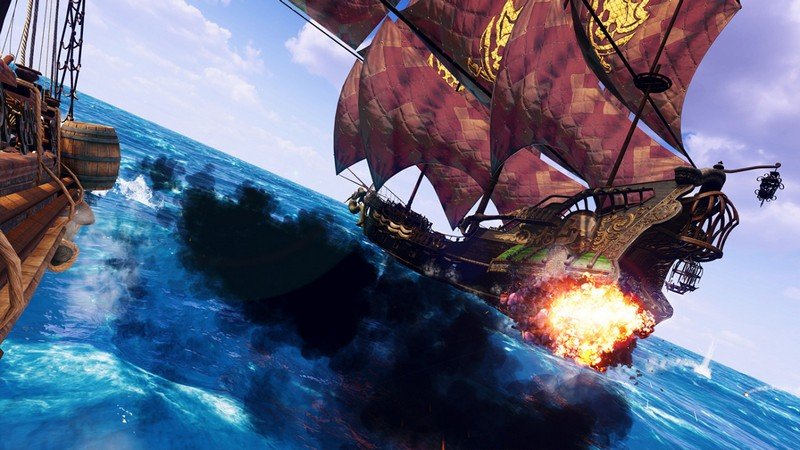 Chris
Dec 16, 2018
★★★
This could really be something if there were more to it. Very good concept but it is only worth about an hour of your time. After that, there is no point. Can we get off the ship at some future release?

Simon
Nov 30, 2018
★★★
3/5 – Very well made, graphics are pretty decent, the gameplay can become repetive after a shortwhile as there isn’t too much depth to the game mechanics (point & shoot). This could have been a lot of fun with multiplayer sandbox. – AmazingTechVR

Ignacio
Nov 10, 2018
★★★
The game is simple and nice, but…
…my left control disappeared only in the game, not in Steamvr.
…the settings menu appears in the middle of the sea.
Bugs, obviously.
Pressing the grip buttons ALL THE TIME is a pain in the hands, and the cannons are difficult to turn.
The game is beautifully made and it is nice, but my hands hurt while I write this note.

Arjan
Nov 25, 2018
★★
Looks good and idea is great as well. However I got motionsickness due to both the rocking of the sea, but also due to skipped frames.

Fishsticks
Nov 13, 2018
★
after I started this game, my headset just stopped tracking for some reason.I checked all the conections, all the sofware, and all the tracking and now It doesent even start up steamvr home.Kinda pissed not gonna lie.