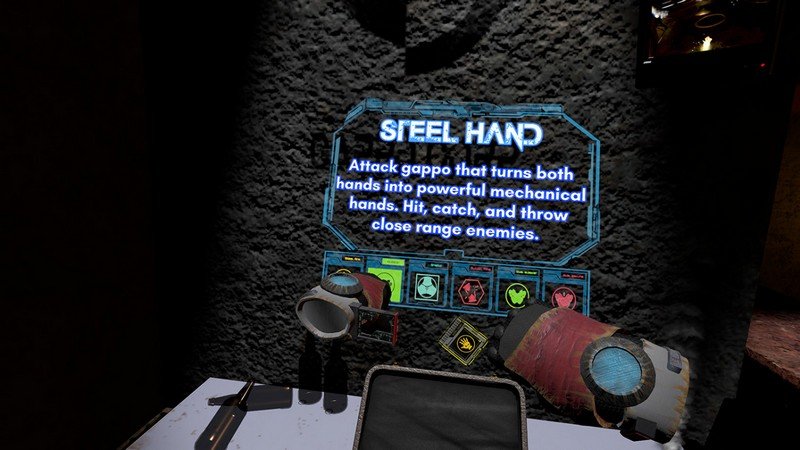 Released Sep 2017
In a future time where an entire species of conscious machines, the makinæ, lives subdued and enslaved by technological pirates, we have enlisted in the Makina Resistance Army, whose purpose is the makina liberation from pirate tyranny to regain control of Kafke, the land promised to them more than a century ago. But to enter the MRA, we shall pass several tests of skill and dexterity, experimenting with ways to survive and destroy our enemies to obtain bonuses and special achievements that result in higher final scores.

Dodge, cover yourself, hit, shoot, catch and throw against the deadly waves of pirate drones as MRA Sub-Commander Cornelia’s voice introduces you to Kafke’s history and walks you through your trial in this historical battle for makina freedom. Enjoy an open desert environment with advanced hi-tech and rusty props as you elevate next to an imposing 200-meter robot statue with the graffiti “Free The Makinæ” on its chest.

We introduce the gappos, named in honor to their discoverer, Dr. Gappo, who has given birth to all this future technology. Gappos are applications that modify in real-time human genetics to provide all kinds of abilities that put humans at the height of makinæ. We will explore defense gappos (Shield), attack gappos (Dual Steel Hand, Blaster), and special gappos (Bullet Time). As you advance in the test missions for the MRA, improve your current gappos and acquire new ones that provide the coolest weapons and abilities to defeat your opponents and unblock the different game modes.

GAPPO’S LEGACY VR is mixed-reality green screen ready and playing on arcades and cybercafes around the world, and it is the result of thorough testing in events and festivals by over five hundred gamers, developers and casuals, all of which provides an extremely pleasant and intense VR experience for an extensive audience, sickness-free guaranteed. Gappo’s Legacy VR is part of a transmedia project which includes a TV series and a comic book in development, and is the first episode into a future saga that will exploit the same cool mechanics with the addition of more story, interactive character narrative, and multi-player co-op.