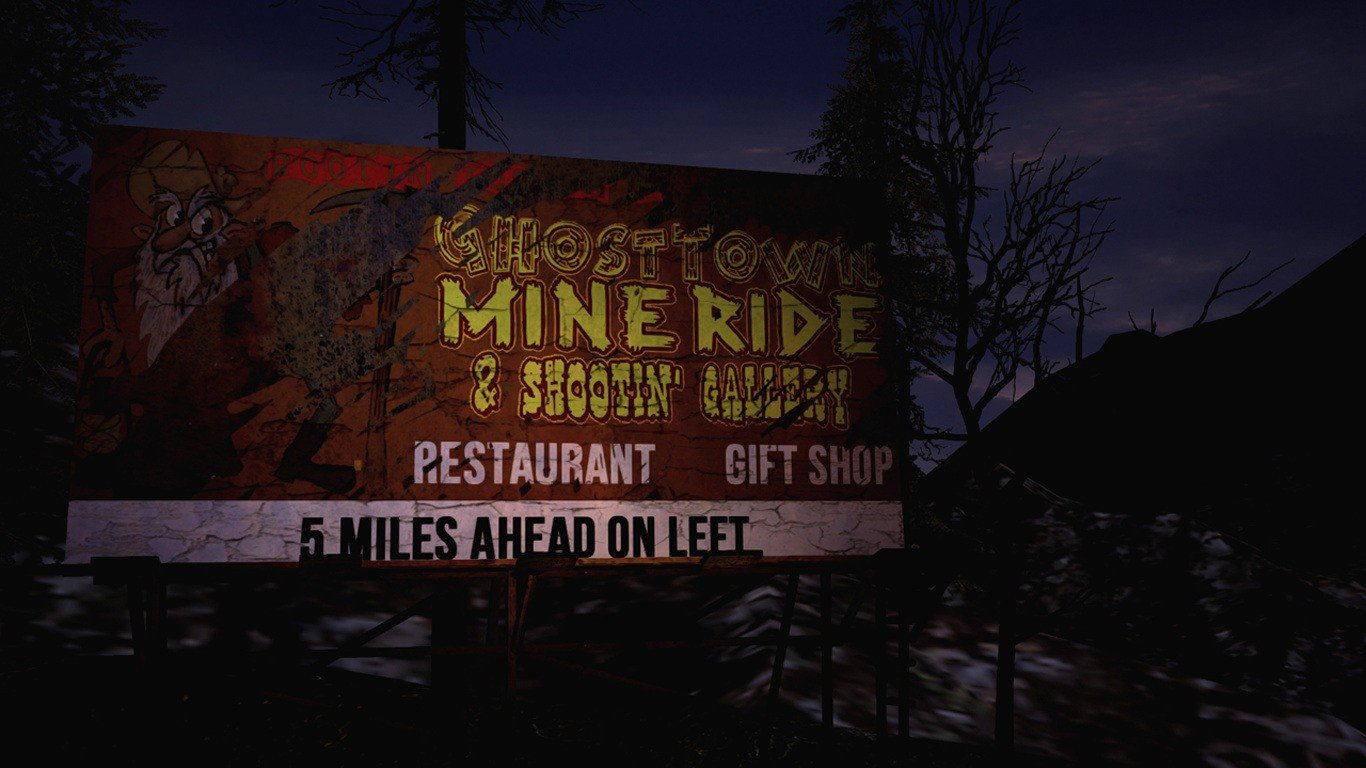 Released Feb 2017 3.8★
“Ghost Town Mine Ride & Shootin’ Gallery” is a thrilling new interactive VR horror experience designed for the HTC Vive. In this approximately 25 minute scenario, you are exploring an abandoned tourist attraction, The “Ghost Town Mine Ride & Shootin’ Gallery”, built at the site of the old Black Rock Mines, which many claim is actually haunted!
Equipped with a flashlight and six shooter, you must keep your wits and have a steady aim if you hope to make it out alive!

Features both on-foot and on-rails sequences!

Warning!
This is a high speed horrifying thrill ride that could cause motion sickness for certain users.
User discretion is advised. 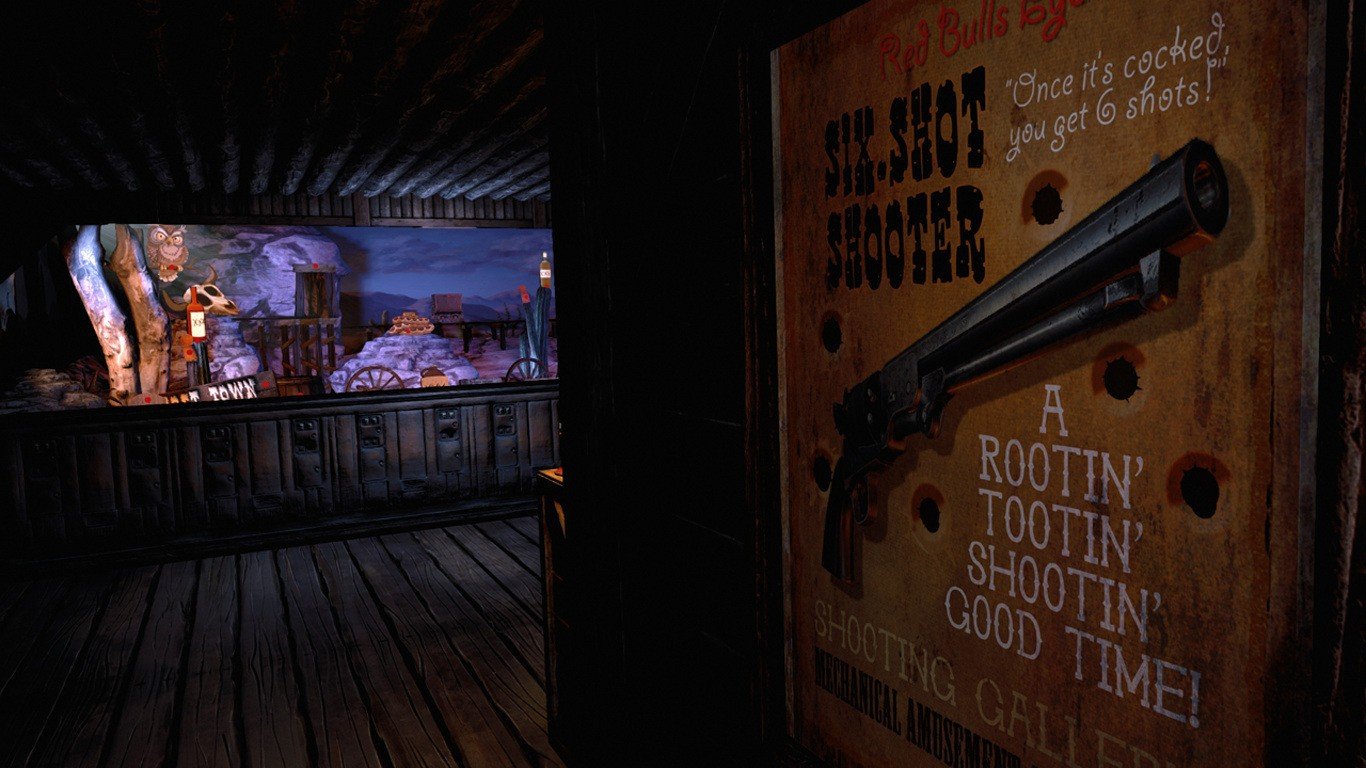 Rich
Jul 09, 2017
★★★★★
This game is honestly in my top three VR games, period. For Disney fans, it feels like a combination of Pirates of the Caribbean, Thunder Mountain Railroad, and Buzz Lightyear’s Astro Blaster. Very immersive; the visuals are extremely good and buttery-smooth. Having a fan blowing on you on oscillate adds a little extra immersion. Spooky as a rule, downright scary at times. It really scratches that “I’d love to be alone in this park after hours” itch I’ve always had. Highly recommended.

Michael
Feb 17, 2018
★★★★★
The shooting gallery at the beginning is fun, and helps you to get used to the mechanics of reloading and moving around. It has a very natural feel when it comes to aiming and shooting. Once you get on the ride part, you don’t know whether to shoot at the gallery items or if you should fear for your life. The elevator was awesome. The end, which I won’t spoil scared the hell out of me!

Great immersion. Great graphics. I’m still a little shakey. Two thumbs up if you like to be terrified!

Greenlit
Jan 04, 2018
★★★★★
One of the scariest, most charming, and impressively inventive virtual haunted house style shooters available in VR. Don’t pass this one up if you enjoy scares and screams!

Aaron
Oct 10, 2017
★★★★★
Short but awesome. It didn’t take long to complete (maybe 45 minutes or so) but boy did it scare the bejeebus out of me. Definitely one of the best VR experiences I’ve had so far! 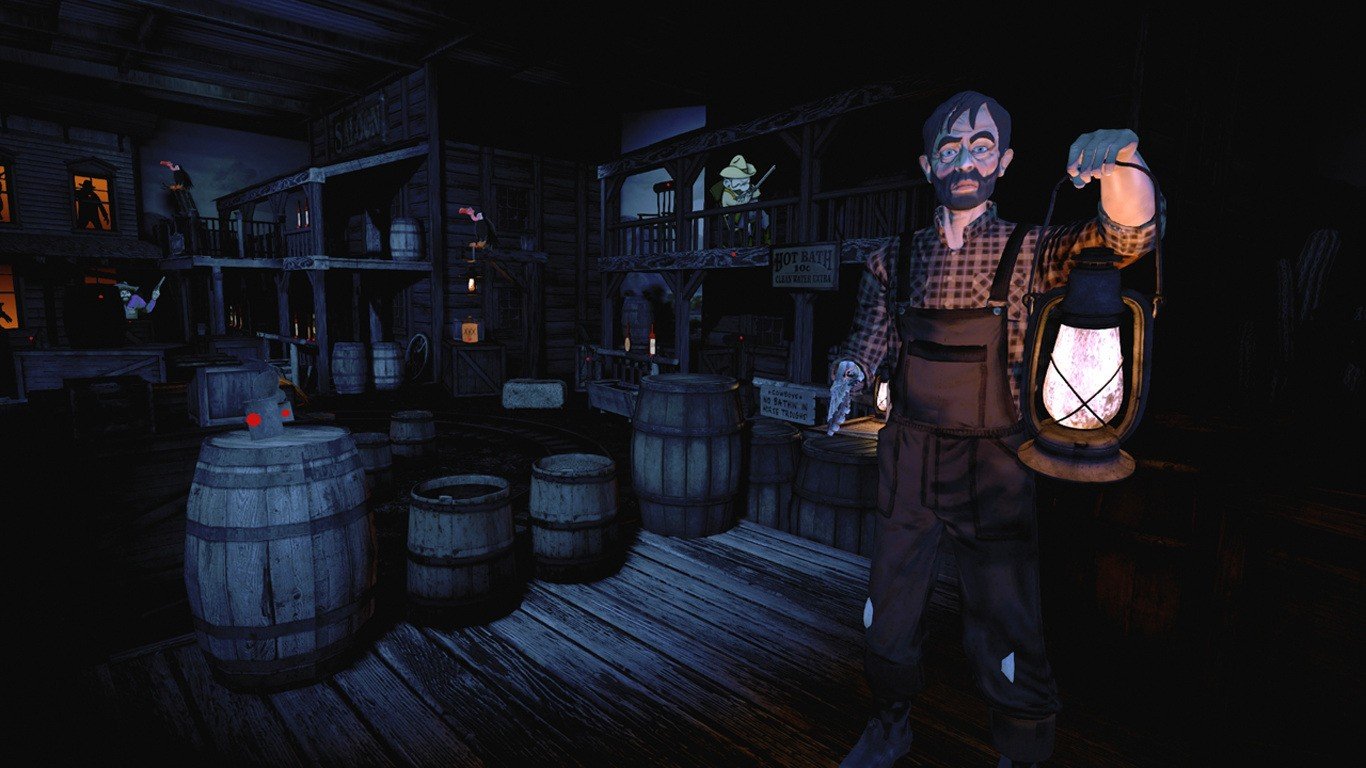 Edward
Sep 21, 2017
★★★★★
great game, scares me everytime. No issues what so ever, running with an MSI GE72VR and an HTC vive with audio headband

Richard
Jun 24, 2017
★★★★★
genuinely brilliant. loved every minute of that!
Gave me some proper chills it did!
great shooting and a proper roller coaster ride.

Wayne
Oct 09, 2019
★★★★★
Brilliant experience! Starts with an authentic shooting gallery that you would typically find in arcades around the world back in the 80’s… Then (if you dare) you can ride a cart into the mine for more of the same! Until that is… The ride malfunctions and the animatronics try to kill you! 5 Star action packed fun from start to finish!

Aaron
Nov 16, 2018
★★★★
EDIT: FIX FOR AUDIO ISSUES
Earlier I wrote about audio issues I too was experiencing, then I remembered about another vr game I had this issue with a while back and how to fix it…it’s the same deal here.
So when you crank the game up and Steam VR is loaded there is a window that opens on your desktop showing the view of the game in Vive on your monitor…click in that window to focus your operating system on it, like it views it as the active window that’s on display on the moment. For some reason if your operating system views it as a secondary back-window it won’t let audio through. Cleared it right up for me, hope this helps someone else out there!
Its a fun game with that issue out of the way!

Mark
Oct 22, 2017
★★★★
Read the warning first…then if you proceed you should prepare to be scared half to death….and maybe a little more! Not for the faint hearted or for those who suffer with motion sickness. A lot of positives in this relatively short experience, I had a few issues with the sound not working and dropping in and out, but other than that a solid scare fest.

MEME WIZARD (moppy)
Jun 24, 2017
★★★★
A truly amazing experience! Some of the most fun I’ve had in VR. The game isn’t too long, but it’s amazing and I would definitely pick it up, especially if you have the viveport subscription. There were some bugs with the vive loading screen popping up, but this was likely a viveport bug not the dev’s.

Lloyd
Nov 06, 2017
★★★
There seem to be some issues with this. The audio feed didn’t work the first three times I ran the software. There are some glitches in the visual playback (brief flash returns to SteamVR ) these are most apparent during the roller-coaster ride and spoil the immersive experience. I am running on a Gigabyte Aorus Gaming motherboard wih Intel i5 7600k processor, a Gigabyte 1080TI graphics card, 16GB RAM. Steam is installed on an SDD, this is stored on a Western Digital Black HDD. If there are minimum hardware requirements for this it would be helpful if they were specified up front.
Notwithstanding, this is a great and at times quite scary experience worth trying.

Brad
Oct 12, 2017
★★
Fun and immersive game, but quickly nauseating.
I’m on a higher-end laptop, and even with a robust frame rate, the jerks and twists in the game had me pulling the headgear off after about 2 mins into the ride.
My recommendation to developers is to avoid “rollercoaster” twists and turns, and keep movement to self-directed walking if possible.

Will
Sep 09, 2017
★
No sound at all in Ghost Town Mine Ride…. like many other people have experienced with this game….But my HTC Vive works perfectly with ALL my other games. I’m going to send an email to Spectral Illusions the game developers and see what they say…. but it looks like there is really no support for this game.