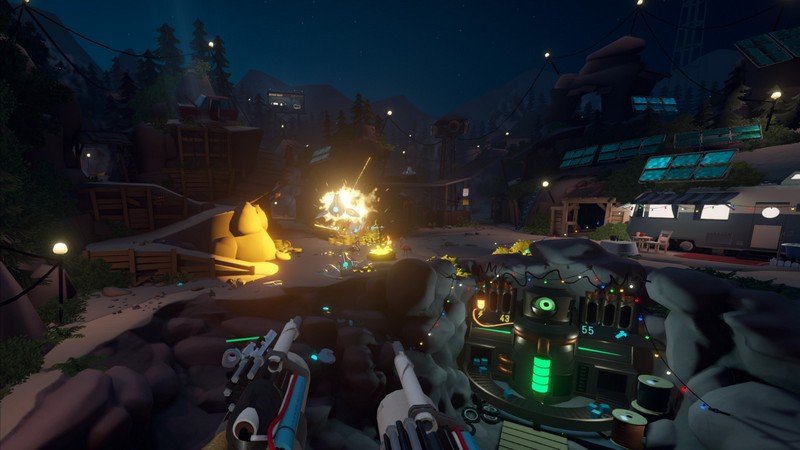 “It’s just me and my Scrappy in this old junkyard, scrappin’ and buildin’ all the day long. He’s grown from a tiny sprocket to a full grown machine and I couldn’t be happier. But those propellerheads at DroneCorp don’t like it one bit, a monopoly on artificial smarts is what they got. Now they’re comin’ to dismantle the lil feller, but i just can’t let em’ do that. With Scrappy buildin’ weapons and traps, all I gotta do is shoot em’. I can blast a gnat off a squirrel’s butt from 100 feet away, so I reckon a couple of big old drones will be no fuss at all.”

Home A Drone is a tower defense-inspired VR FPS, where you use skill and strategy to defeat the DroneCorp menace who threatens to take away what you love. Use carefully placed traps, and a pile of quirky, scrapped together weapons to shoot down those pesky drones, and collect their scrap to build more weapons.

➤ Arcade and Tower Defense-inspired gameplay, built from the ground up for VR!
Balance your preferred gameplay style against your resources during fun, fast paced action!

➤ Play Offensively or Defensively…
Should you use skill with weapons to fight back the DroneCorp onslaught, or should you use strategy to place traps to most effectively stop the drones in their tracks? Why not both? In Home A Drone, you decide how you should play!

➤ Quirky weapons and defenses
DIY-inspired creations like the Battery Blaster, the Saw Sniper, and the Football Flinger are your instruments of battle.

➤ Expanding arsenal and upgrades
Upgrade your weapons and traps with the Scrap from each drone you defeat, making them more powerful and changing their characteristics.

➤ A Man and his Scrappy
Fight for friendship, and discover the truth about DroneCorp and Scrappy!

We have a vision of Home A Drone that requires a longer development cycle than our small team typically can handle, so Early Access allows us to continue working towards that vision. We feel like the current game is only a taste of the fun, silly, replayable experience it could be. The game is at the point where community input has a chance to help shape its future.

Our goals for Early Access are:
◆ Community building – We want to give people a chance to enjoy our game at its current state and communicate with us and each other!
◆ Content expansion – We have ideas about how to expand out the game, and we want to be able to bring regular updates to players.
◆ Improvement and shaping of future content through communication with the community – We want to be able to take in outside feedback to influence and improve development, and let us make Home-A-Drone the best game it can be!

𝓠: Approximately how long will this game be in Early Access?

We anticipate another 6 months to a year of development, depending on the success of the game in Early Access, which will impact the scope.

𝓠: How is the full version planned to differ from the Early Access version?

The primary goal of entering Early Access is essentially adding more content like more intricate boss battles, adding some complexity to certain interactions like directly interacting with the Drones with your hands and other attacks, giving Scrappy even more dialogue and interactions, and longer gameplay.

In addition, we will also be listening to the community feedback and suggestions, which may affect the content of the final release. Something like multiplayer is a stretch goal, but if there’s enough interest in it, we will implement it.

𝓠: What is the current state of the Early Access version?

With the current version of Home A Drone, the focus has been on polish and performance of both graphics and gameplay, making sure the game looks great, feels and plays well, is easy to pick up, and provides enough content to be both fun and challenging. Presently, there are 10 rounds, for a total of around 1.5 hours of gameplay. We’d very much like to push this to a longer gameplay time, as well as add additional game play modes to extend replayability.

𝓠: Will the game be priced differently during and after Early Access?

The price may increase moderately after Early Access, but that will depend on the amount of additional content and gameplay that is added during the Early Access phase.