How To Make A VR Headset

Purchasing a VR headset is still costly, but making your own set at home can be easy and inexpensive. Google Cardboard is one of the ways we will have a look at for experiencing your own Virtual Reality right in your own home. 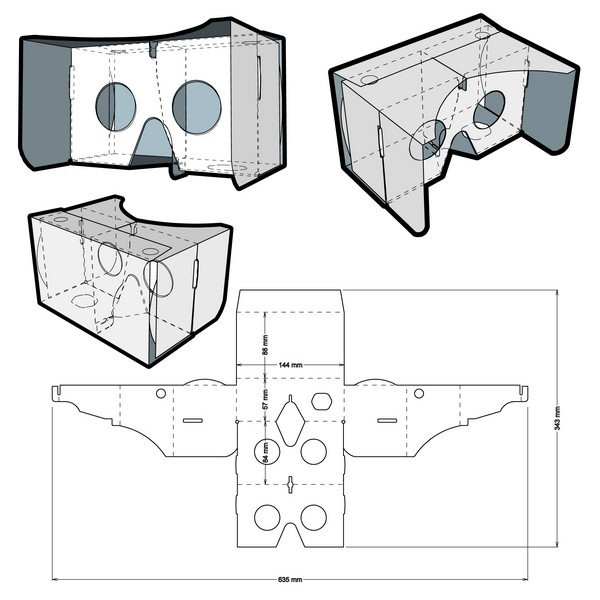 If you have some paper and cardboard, clear plastic water bottles, a syringe, glue, scissors, and epoxy in your home, you will be able to take advantage of this tutorial for making your own VR headset at home at minimal cost. If you need to purchase any of the items listed, they are quite inexpensive. Many people have made functioning Google Cardboard headsets from recycled materials, including the lens.
Normally, finding and purchasing the lens or materials for such can be very difficult, so we will show you how to make a set out of the clear plastic mentioned above. If you follow this pretty easy tutorial, you’ll be wearing and playing with your very own VR Headset and will not have spent anything.

What makes it work?

To begin our tutorial, we look at how to build your DIY Cardboard Virtual Reality homemade lens. Following that, we will show you how to create the cardboard encasement for the Google Cardboard with the use of templates you can download from the internet with an easy search.
Creating the lens that you will look through in your homemade VR headset helps to shorten the LDDV (least distance of distinct vision), allowing for a clearer view of a smartphone screen from only a few centimetres from your face.
In order to begin creating your biconvex VR headset lens, you will need some clear plastic bottles and a little water. Now, follow the rest of our tutorial below to discover how to put it together. 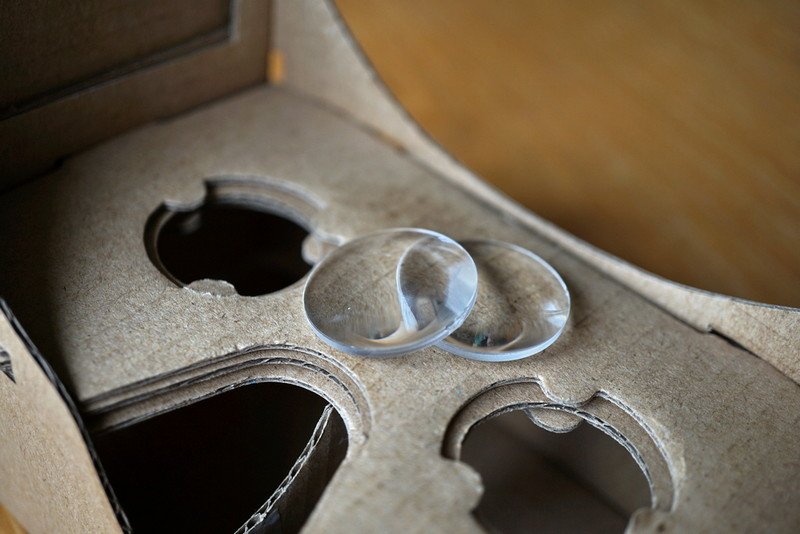 Creating your homemade Biconvex Lens for your Google Cardboard Headset

Let’s start off with the lens, and then look at how to make the cardboard enclosure for your lens and smartphone. If you’ve already purchased a lens, you’re welcome to skip to Step 2. If you haven’t, then follow these easy steps to create your own Google Cardboard VR headset.
Collect an empty see-through bottle that has a decent “curvature” to it. A typical water bottle should do the trick.
Next, using a sheet of paper or cardboard, draw a circular template with a 25-millimeter diameter.
Now, take your circular template and cut out four pieces from the upper curved area of the plastic bottle/s with your pair of scissors. You will need at least the four pieces, plus maybe a couple extra in case of error. You’ll be using 2 pieces to create each one of two biconvex lenses. Note: be sure to cut the initial circles slightly larger than your circle template, then trim them down to the exact size you measured out. This will avoid cutting the pieces too small or cutting into the circle mistakenly while trying to remove it from your bottle.
Take 2 of the clear plastic piece and put them together, so that you create a space inside that will be the base of your biconvex shaped lens.
The next step takes a little precision, so carefully seal the entire circumference of the two pieces with your quick-drying epoxy.
Grab your syringe and fill it with clear water only, and slowly inject the fluid into the biconvex lens until it is full – bubbles may appear, and you can remove them by very gently squeezing the lens to get all the big bubbles out.
Once all the bubbles are removed, fill it back up with water and reseal anything that opened, including the hole made from the syringe’s needle.
After allowing it to dry over a few minutes, take your lens and test it over some small print in a book or newspaper.
For your second biconvex, just go back over the procedures above. Leave enough cut-outs in case something goes wrong.
If you are successful in building your pair of lenses, congrats! You can now move on to making your very own Google Cardboard VR headset. A few things to keep in mind when making your lenses – the power of the magnification will decrease with a larger lens, and the smaller you make the lens, the greater the magnification will be. The magnification power is dependent on the curvature of the lens. In other words, if the lens is bigger, the curvature is smaller, and therefore the magnification is lower. In reverse of that, if the lens is smaller, the curvature is larger, and therefore the magnification is greater. The result is that smaller lenses offer higher magnification and larger lenses lower magnification.

Now you have your lenses completed, and you need something to put them in so you can get playing those neat smartphone VR games. Follow these easy steps to create your own cardboard enclosure.
You can get the Google Cardboard template browsing for it, and then printing it out in landscape mode. Using long-bond paper is the best option.
Use your scissors again to cut the templates out.
Next, glue your templates to your cardboard.
Carefully, cut out the cardboard templates around the images you printed out. Once you have finished cutting out all the pieces, you can then follow the markings on the template pieces you downloaded from the above link and fold your Google Cardboard enclosure to specifications.
If you would still like to see it being put together, you can do a Google search for a video on construction.

Combining your lens with your Google Cardboard cut-out VR Headset

Take your pair of lenses and slip them carefully into the eye-slots of your homemade Google Cardboard headset. The slots will allow you to place the lenses tightly into the VR headset. 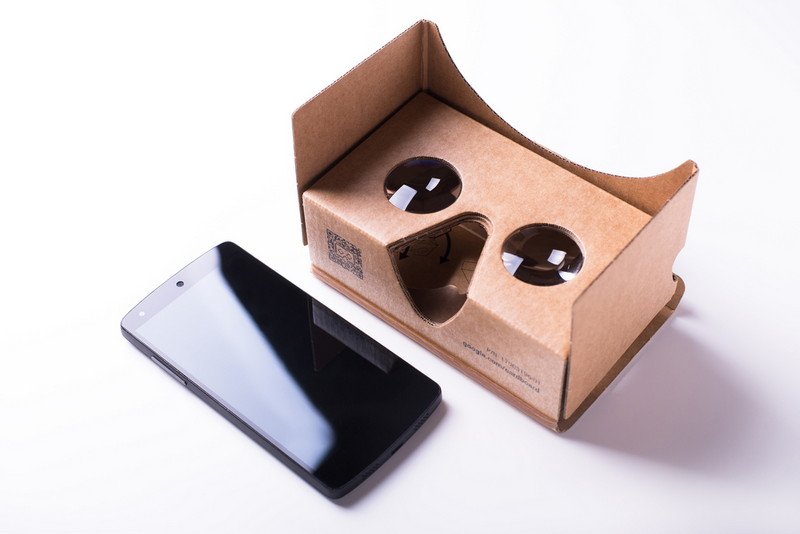 Now it’s time to have some fun with your own DIY Google Cardboard VR Headset. You’re going to download some VR apps to your smartphone and do some test runs. You can either download any VR app or, if available, the Google Cardboard app, depending on whether you have an Android or iOS smartphone. Once you’ve selected an app, i.e. – Rollercoaster VR (an Apple app) – put your phone into the VR headset and have a look. If everything went right in your build, you should have a nice clear close-up look at your video.

We start off this section with a warning that if you use too powerful magnets around your smartphone, you could mess with the sensor’s calibration. Experiments have been done with some powerful magnets near a phone, and although the compass in your device can often re-calibrate, you can also damage it. You can also mistakenly magnetize a component inside your phone.
It’s also been found that even if the compass continues to work decently, the field strength changes when you turn the phone in different directions. Take an iPhone, for instance, they are built with a few stainless-steel covers inside that can possibly become a little magnetized by the magnets. They will probably demagnetize over time, but you really shouldn’t take the chance of getting powerful magnets to close to your phone or its compass calibration.
The reason for using magnets with your homemade VR headset is because your smartphone is not reachable once it is in the viewer. Therefore, if you want to keep using some functions of the applications, you will need to have a way to select them somehow. This is how the magnets come into play. Your smartphone is equipped with a very smart device called a magnetometer, which can detect changes in your phone’s magnetic field. With your device being secured inside your viewer, the two magnets allow some functionality.
Inside the box, when putting it together, you need to tape a small disc magnet to the inner wall, and on the outside should be a groove in which you place the other magnet, which is held in place due to its attraction to the magnet inside. The outer magnet has a side that is countersunk allowing you to slide it down easily with a finger, and when you let go of it, it should pop back up to its starting position. With movement, the magnetic field between the two magnets changes, and your smartphone can read this as if you flipped a switch. The holdback of this extra operation you can add to your headset is that the function of your magnet switch changes app to app.

There are other ways to create a VR Headset on the internet, but this is the most popular without having to spend any money, and if it breaks, you don’t have to go out and buy another one, because you will already have the most necessary basic supplies handy. It can be a fun project to do with your kid, or with friends, and then enjoy testing them out with each other. Try making your own Google Cardboard VR Headset today!