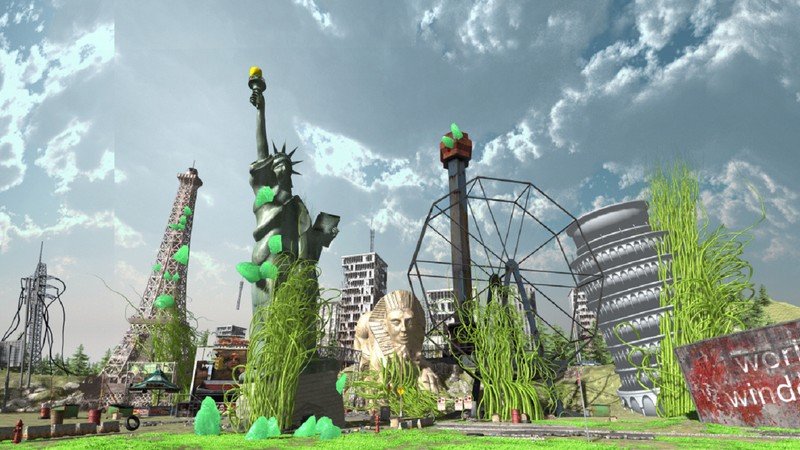 Released Oct 2016
ABOUT THIS GAME

Lonelyland is a sandbox survival VR game, and now you can play without VR device. The game style design considered VR feature, so you can sit down and play for a long time, still feel comfortable, and not easy get tired even with a headset.

Aliens manipulated plants on the earth and destroyed our civilization. In order to survive, you have to collect, build, hunt or fight. In this game you’ll have a special post-apocalyptic survival experience in a class of its own.

Implemented Features
1. Combat System
1. Nearly 20 kinds of creeps, you can get vary trophies from them to create a lot of things.

3. If you hit the blind side the creep exposing to you (the chance is relate to player’s perception value), you won’t get hurt.

5.Cripple the creeps by shoot their legs, it’ll slow them down and make them weak.

6. If you have higher sneak value, the creep will take longer to discover you.

7. If you have higher perception value, it’ll be easier for you to find the creep’s blind side.

8. Bullet time system, it happens every time the fight begin or when you hurt badly. It’s an excellent time to hit creeps’ vital part and blind sides, and the reloading speed is much quicker too.

9. There’re about two kinds of fight style: with high sneak value and hurt the creep badly in distance if you’re a good shooter; or with high perception value and fight against the creep face to face, but you’d better put on good armor.

10. Some creeps can attack at a wide range, hit their missiles before they hit you.
2. Weather System, Time System and Season System
1. There’re sunny, rain, snow, fog and hail 5 kinds of weather in this game. You’d better take care of your currently sanity and warmth.
2. Daytime, dusk and night 3 stage in time system, some creeps behaviors different in these stages. And at night, you’d better light a fire or something like that. It’ll help you keep away from danger and find out something can’t see in daytime.
3. And there’re about 4 seasons in this game, and the change is huge.
3. Build System, Cooking System and Planting System
1. There’re things you can use to create things, such as wood fiber, resin (plastic), tinder, iron, lead, Ti, crystal, chips, oil, battery, salt and so on.

2. You can use the 3D printer to create pan, microwave oven, lamp, glass garden, weapons and so on.

3. Use a sewing machine to craft about 10 clothes each with its own characteristics.

4. Use pan or microwave oven to cook over 20 kinds of food. Things you can use to cook are starch, vegetable, meat, egg, sugar, salt, oil, battery and so on. To vary your diet makes you feel good.

5. You can use glass garden to plant several different plantings, efficiently provide different resources.
4. Terrain System
We have forest, prairie, town, city, snow land, desert, alien infected zone and dead zone and so on, use the way of roguelike to generate. And so are the belongings of these scenes. Terrain may influence player’s attributes.

Unique Experiences
1. Use 3d printer to create weapons and other stuffs.
2. Use sewing machine to create clothes.
3. Creeps can be infected by plantings in summer, be careful.
4. Egg is a good thing, but it’s dangerous to steal an egg from dodo.
5. Boar may eat shit, don’t rob it from a boar, or it’ll get angry.
6. Find batteries from vehicles or create them with lead.
7. Three ways to get electric energy (wind, solar and generator).
…
We’ll add more gameplay in the future, thank you for your support.