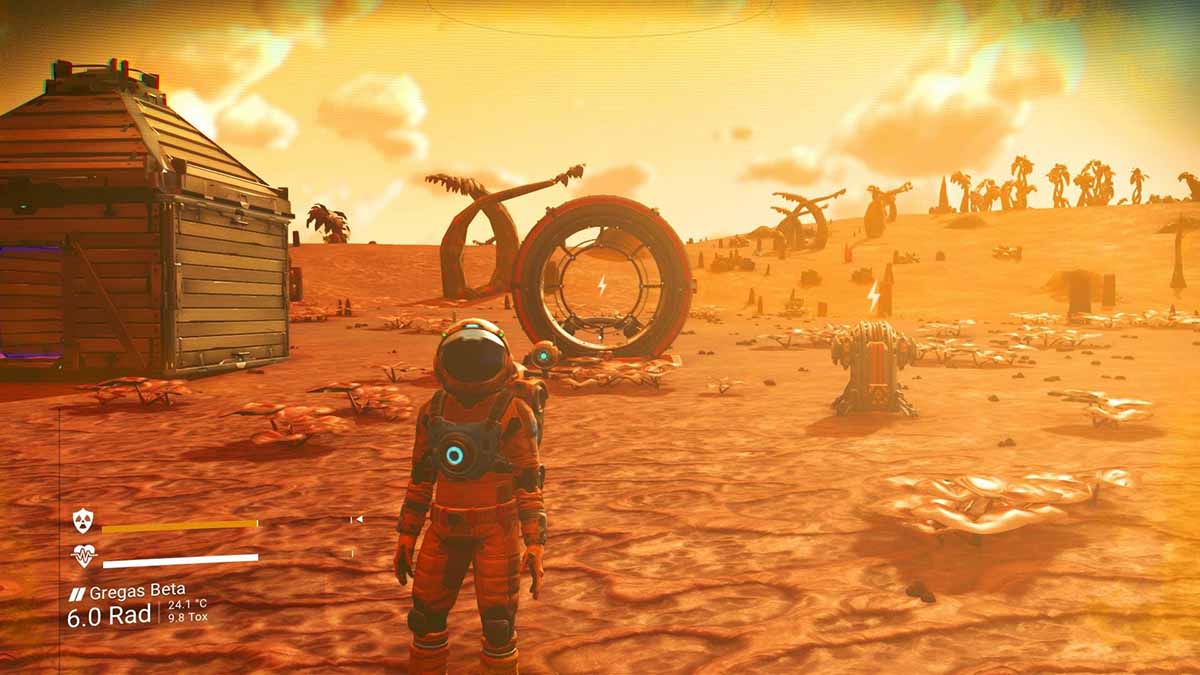 Your Guide To Building And Powering Your No Man’s Sky: Beyond VR Base

If you’ve played No Man’s Sky in VR, you’ll already know just how massive this game really is, especially after the latest Beyond update. It can be a pretty huge undertaking to get to grips with all of the basics, so this guide is designed to help you learn how best to build then power your own base.

A key new feature which has been added to the latest Beyond update is a requirement to power several bigger pieces of the base. While wooden structures, portable refineries, and base computers still don’t need to be powered, if you want a teleporter to work or you want the lights to turn on, electricity is going to be necessary.

In this helpful guide, we’re going to cover all the basics so you can get to grips with base building. We’ll show you how you can get started, give you an insight into the VR game mechanisms of constructing bases and tell you where you can find new blueprints. We’ll also show you the best way to power these creations.

Before You Build Bases 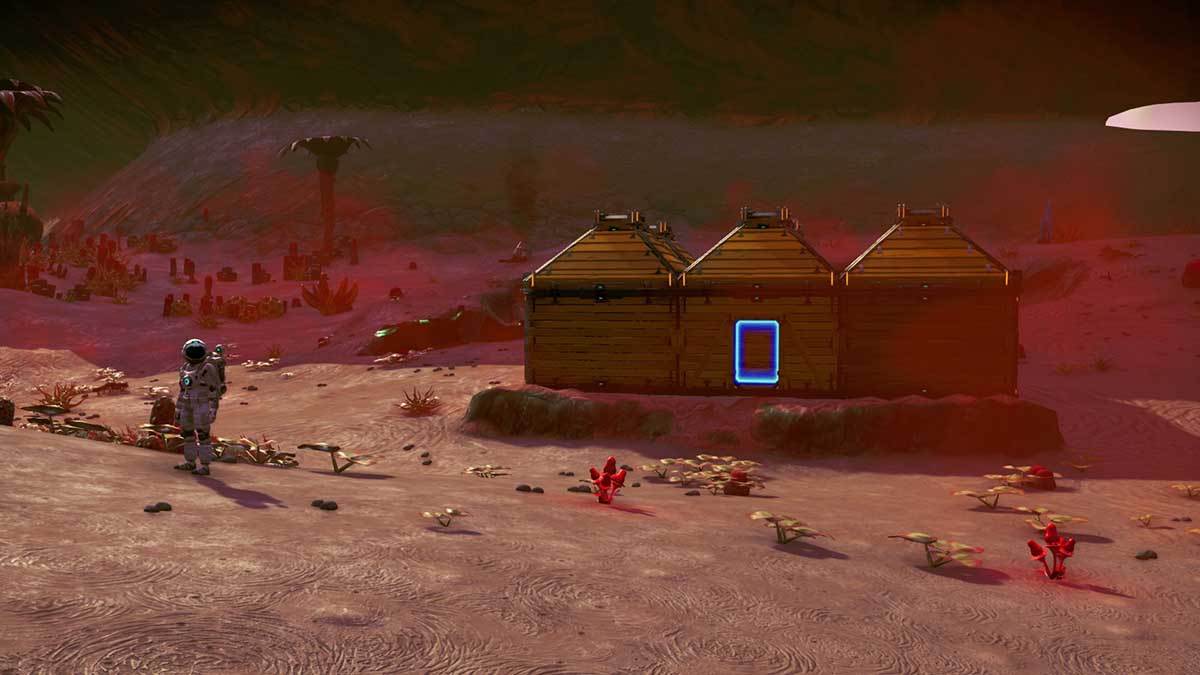 When you follow No Man’s Sky main quest line, you will learn gradually how you can build a simple base. You’ll also learn about the different pieces of core equipment and what they do. If you’ve got an installed warp drive on your ship, you’ll be able to already travel to different star systems, and this means that you’ve mostly completed the early section of the tutorial and will have a basic home which has been established on the starting planet.

At an early stage, you will learn blueprints for things such as wooden walls, floors, and roofs, specialist terminals, and base computers. You must finish these early tutorials first before you progress to the information we’ll share here about constructing larger bases.

The Basics Of Base Building

The most vital element of constructing your base in this game has to be the planning element. You need to be well prepared by having a clear idea of exactly what you’d like to construct and the materials you’ll require to construct it. It’s then possible to begin stockpiling the necessary resources while finishing the preliminary steps.

While you’re working on this, watch out for any Buried Technology. This may be found on the planets you visit. If you use the Analysis Visor, you will see that there are long range points of interest icons. Modules of Buried Technology have a similar appearance to a standard Wi-Fi signal. Use the Terrain Modifier Multi-Tool attachment to dig them up. You’ll then benefit from Salvaged Data. There will usually be around 1 to 4 of these in every buried module. If you save them up, you can then use them for buying new blueprints.

So if, for example, you’d like to construct a classic science fiction base with rooms that are circular, you’re going to require many prefab blueprints. Alternatively, you can accrue and research concrete or wooden blueprints so you can get creatively freeform in your design. Before you go into VR, it’s well worth checking out the No Man’s Sky wiki. This excellent resource really helps you to plan your course of action before beginning the game.

In general, if the game is going to recognize something as your base, you’ll only need a base computer. As soon as you do this, the game registers that location as a base and allows you to teleport there. It also saves that icon on the compass and map so you can locate it easily next time. Anything that you construct around the base computer is also recognised as part of the base. After that, you’re able to do pretty much anything you like. You may want to begin with one big cylindrical room, then add connecting corridors, make more rooms and then put a door onto the front, allowing you to get in and out.

One useful idea is to designate informal themes for every room in the base. For example, in one large room, you may want to put your save beacon, refineries and blueprint research station. In another room, you might want to put your specialty terminals along with your hired NPCs to form the central point of the base. Next, you could install your teleporter in another room, and a garden could be set up in another. Essentially, you have complete creative freedom to design something that works for you. 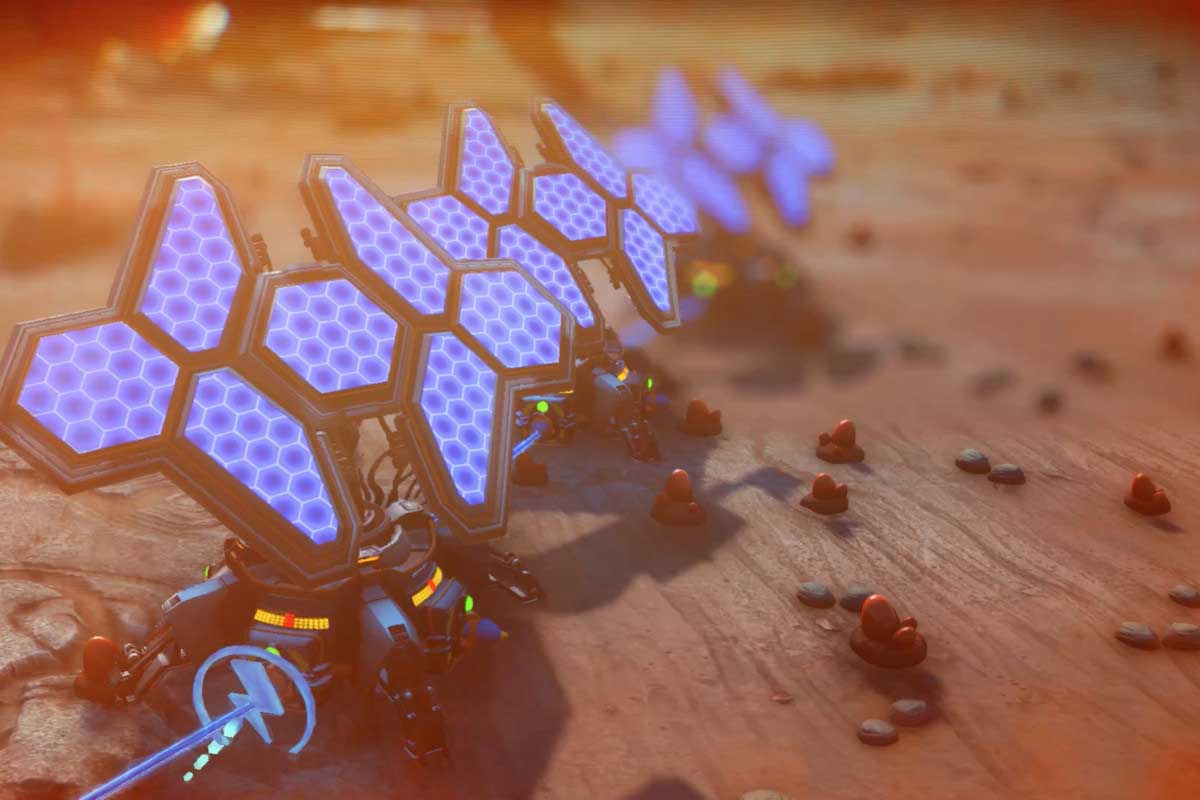 The more that you add onto your base and the more you construct, the more power you’re going to need. This is one of the new features which was introduced in the newly released Beyond update. While it may sound daunting, in fact, once you start playing you’ll realise that it definitely isn’t as complicated as you might think.

For a start, not everything needs power to function. Portable technologies, for example, such as the portable refinery and base computer, are capable of running alone without any need for an external power source. Other parts will require power, though, for example teleporters and storage units. 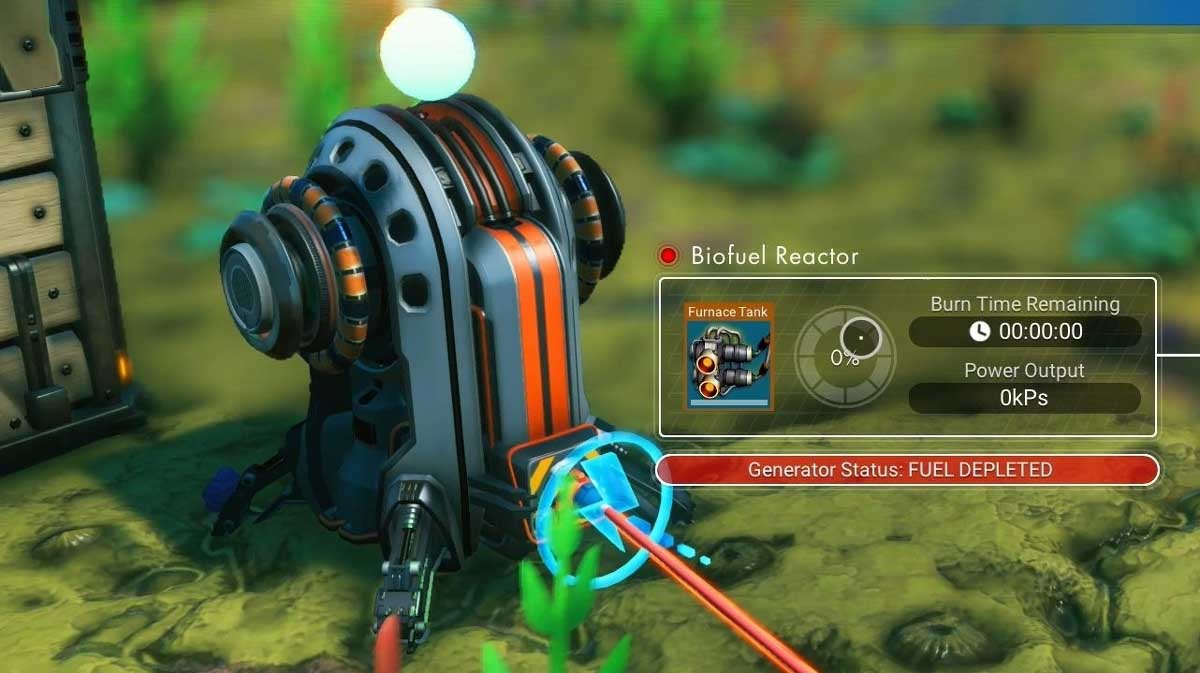 In this game, the first blueprint for a powerful technology which you’ll be able to access is that of the biofuel reactor. While it’s functional, it isn’t exactly convenient. It requires an ongoing fuel stream like Condensed Carbon. This means you aren’t able to simply set up the reactor and leave it to work on its own. You have to constantly maintain it.

Therefore, you might want to skip this phase completely and go straight onto batteries and solar panels. While this takes longer to set up, it’s worth it for the hassle that it saves you in the long-run. You can always make biofuel reactors to keep on hand just in case more batteries and panels are required later, but you lack the essential resources and need quick access to your teleporter or storage unit. 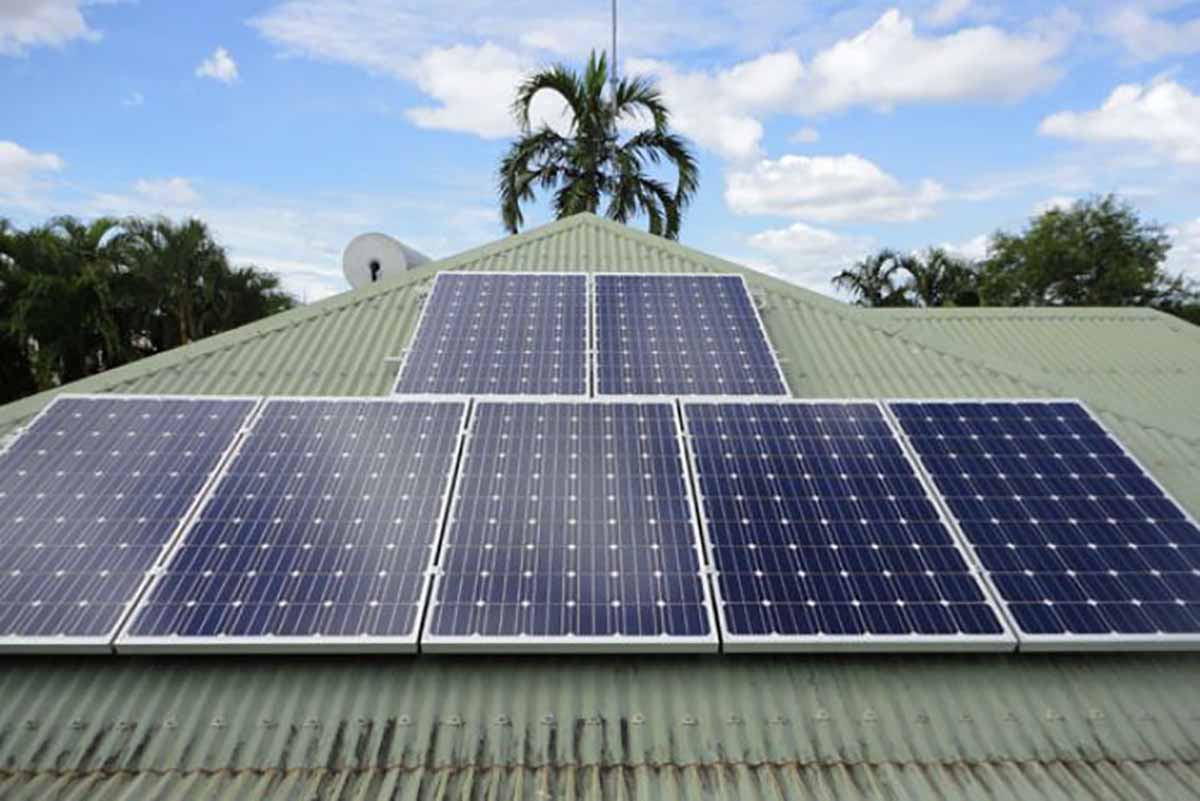 Renewable energy technologies are big news in the real world today, and they’re big news in No Man’s Sky too! Solar panels can be set up in any location you desire. You can even set them up in your base, and they start to create power straight away. While it seems pretty silly, you’ll find that it works for now (although at some point it may be patched so they’ll be required to be constructed outdoors). It does, however, have to be day if they’re going to build up power. During the night, they shut off.

The solar panels then need to be connected up to batteries which are capable of storing the additional energy required for the night, which wasn’t used during the day. Bear in mind that if you’ve installed a lot of technology in the base, you’ll need a lot more energy to be generated to keep it powered. 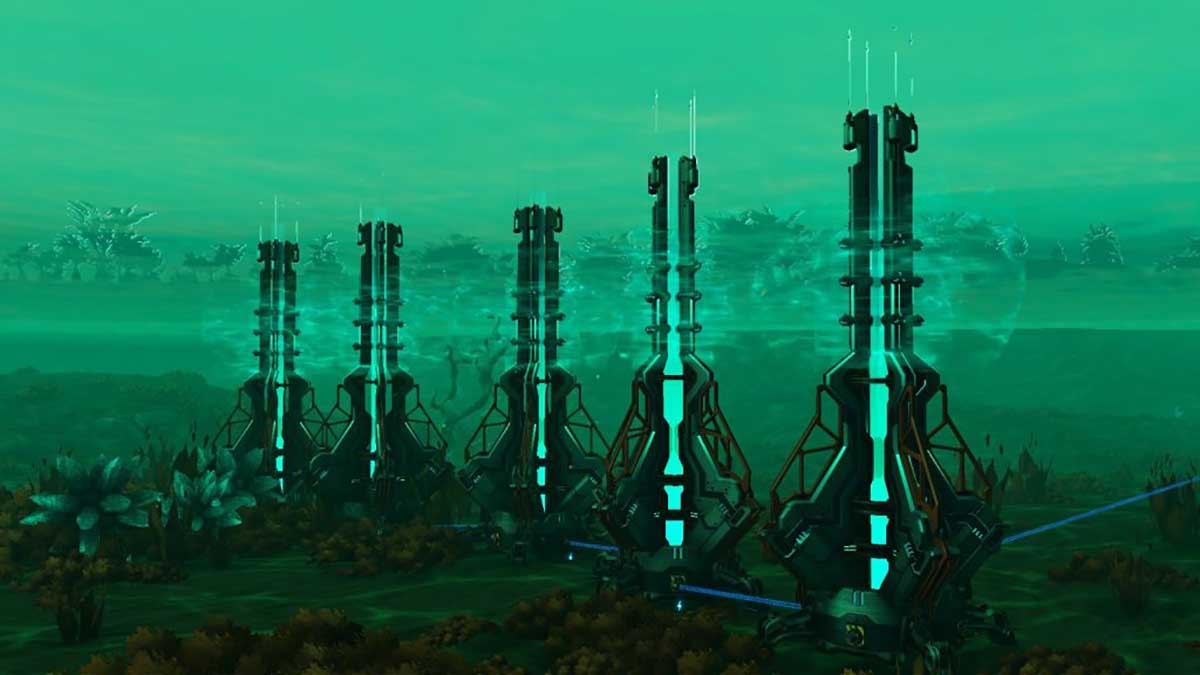 There is another option when it comes to powering your base. This is to use Electromagnetic Generators. If you upgrade the Analysis Visor using Nanites at the Space Anomaly you’ll be able to add the function to scan an area for any sources of electromagnetic energy. Once you’ve found those electromagnetic generators, you can build them and place them in the location you desire to supply a constant amount of dedicated energy. If you build several electromagnetic generators in one location, it’s possible to boost the amount of energy you generate. After that, the next step is to run some electric wires to the base. This will help you to get up and functioning. Bear in mind, though, they are fairly expensive to build. This means that, initially, focusing on batteries and solar panels are probably the best choice. 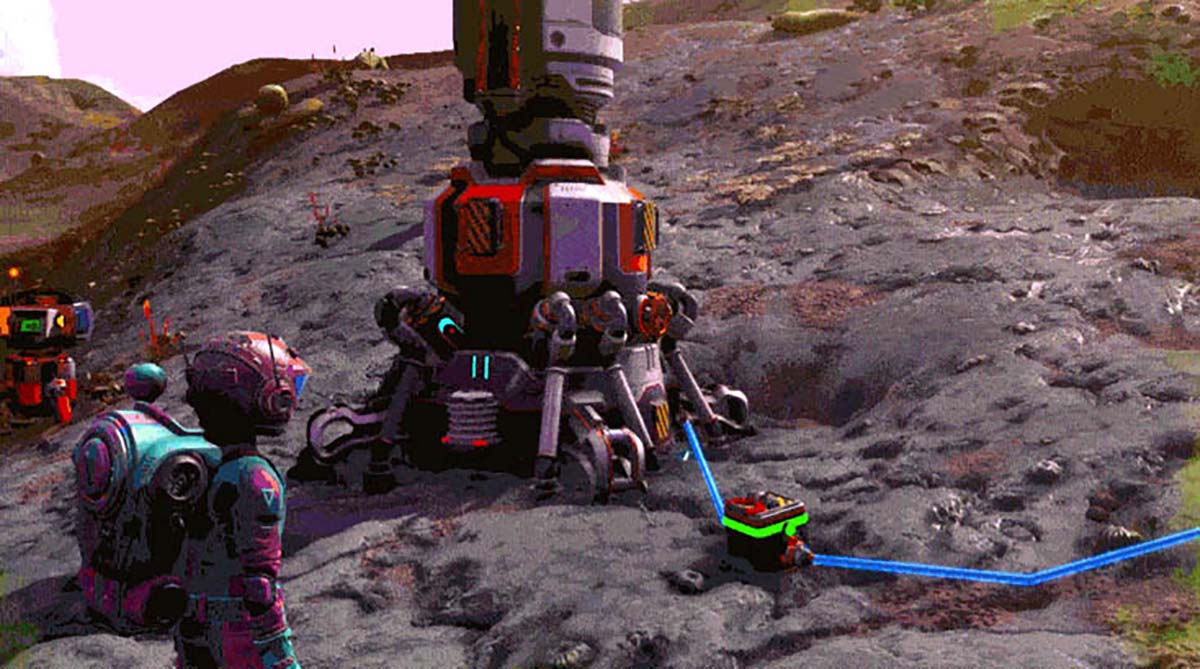 The most complex element of designing and building your base is running the electrical wires through it. The good news, though, is that the blueprint for electrical wires is free. It will cost you no resources, and this means you can access them at any time you desire.

The complex part of running your electrical wires is knowing what you need to connect to what. The key to this is to be aware of what will and won’t need power to run. If you construct prefab buildings, you’ll note they’ve got exterior power connections. This means that if you install anything correctly in your base, it will receive power as long as you’ve connected power to the base. That means it’s possible to set up solar panels on the exterior of the base then connect them together. Finally, you can run just one electrical wire to the exterior outlet of the base, and everything inside it will be powered effectively.

You can also extend the wires between sockets, but if you like, you can stop halfway through so a junction can be created allowing you to either branch the electrical wire or turn it in a different direction instead of stringing it across the whole space. You have the freedom to choose whichever options work best for your base and your preferences though. So, if you’ve chosen not to use any of the Prefab buildings, you could put a Power Transformer outside the building to power everything inside it. You can connect things using electrical wires and switches in this way.

So, now you should have all of the information you need to help you to get started with constructing your first base and powering it in No Man’s Sky. With this helpful advice, you should have a good idea of the basics of getting your base off the ground and how to get started with wiring so that you can make sure that all of the vital components of your base are properly powered and functional. Once you get to grips with this process, you’ll love the creative freedom that it gives you!