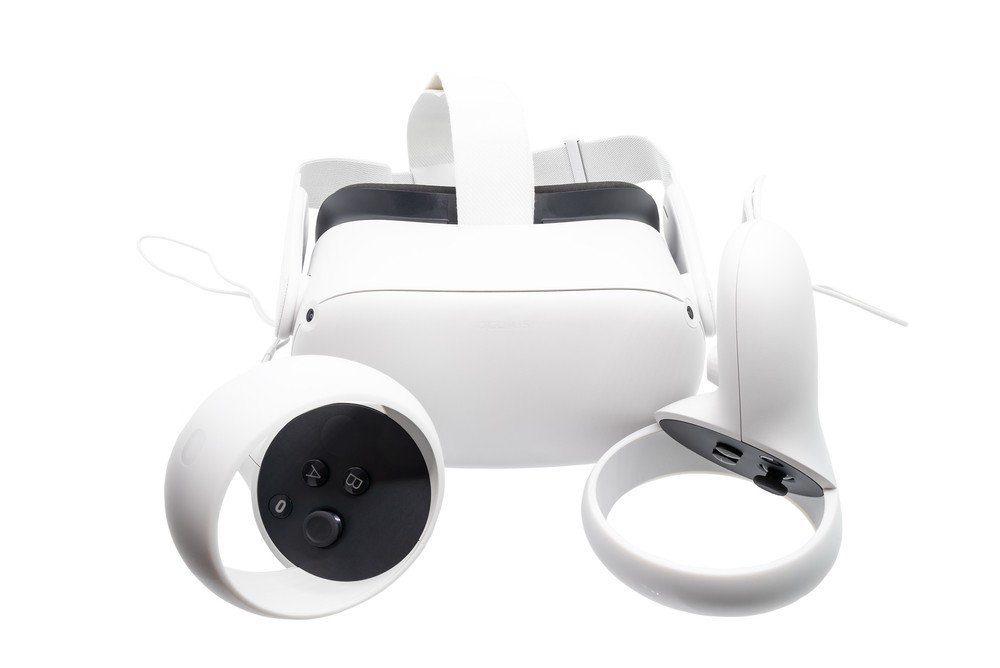 Standalone virtual reality game play is a dream for many. The idea of being untethered and free to roam in room space worlds is awesome. Oculus had a try at offering this untethered experience with the Go headset but in reality it was the Quest that really achieved the immersive VR experience with the hindrance of cables. Oculus Quest 2 continues the journey of its predecessor but improves it with a sharper screen and a lighter and more comfortable fit. It also offers all this tech at a reasonable mid to low level price – being a full $100 cheaper than the original and more than half the price of its nearest rival.

Here we offer a detailed review of the Oculus Quest 2, exploring what makes it genuine value for money.

The design of the Quest 2 is not so much different to what has gone before. It is smaller and lighter than the original and the smooth plastic chassis is attractive. Much of the design is quite bare – but this allows the four-position-tracking cameras mounted on the edge to give this a sci-fi futuristic look.

To the left side there are the ports and jacks and on the right the power button and LED indicator. There is a volume control under the headset and two pinhole microphones. You can adjust the position of the lenses and there is a separator that keeps the headset a little away from the face – offering improved comfort.

The headband is a three-point elastic strap on arms that can move up and down. There are speakers and so no headphones and there is a velcro strap, helping you to adjust the fit. While it is easy to adjust the headset, it doesn’t feel so secure on the head as some other models. There are replacement straps available at an extra cost and it might be worth the investment. 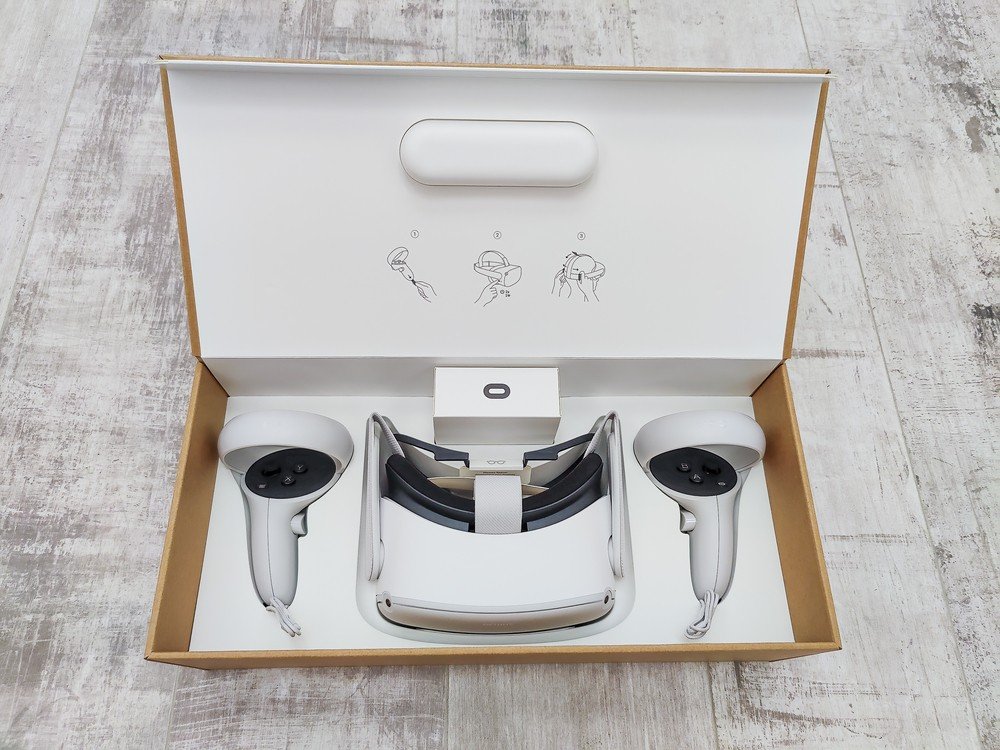 You have two motion controllers that are only a minor redesign to those on the Oculus Touch. Rounded angels and large rins and two triggers for your index and middle finger. This is an ergonomic design with a comfortable resting spot for your thumb.

The controllers will feel a little thicker in your hand but they sit securely in the palm. In reality, the design of the controllers is only really a slight tweak on the previous incarnation – and there is no change to the layout or to the functions.
The headset also sorts hand tracking – in other words – you can play with your bare hands. The cameras follow your hand positions and enable a little more freedom. You can do a lot of the action by pinching your thumb and finger dragging together. Pinching and holding allows you to click and drag.

While you can track your play with your hands, you really do need the controllers for most games and apps. When you go into Netflix, for instance, you will be prompted to use the controllers. 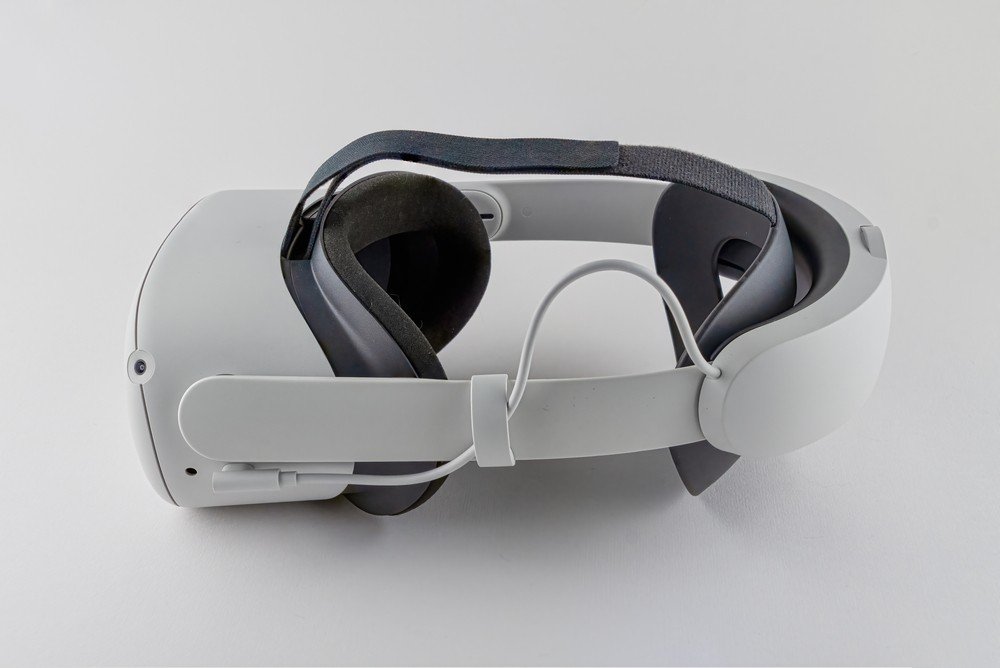 The processor in the Oculus Quest 2 has been upgraded to the Snapdragon 865-derived Snapdragon XR2. Before it was Qualcomm Snapdragon 835. It is impressive that there has been such an upgrade in the processor, considering the drop in price. It is a significant boost in performance from before, with 6GB of RAM – two more than before.

The display is better too. The headset resolution is 1920 x 1832 for each eye and has the same 72Hz refresh rate – but with the option to improve this to 90Hz in the near future.

However, Oculus have still nove solved the issue of battery life and the aspiration for a standalone headset will only be fulfilled if they can solve the power cable issue. There are batteries that can be held in carry cases around the waste for a chunk of money – and this goes some way to solve the problem. It goes to show that Quest 2 has some room for improvement, so players can have more than a couple of hours of gameplay before recharging.

The store and link

Oculus Quest 2 still uses the same menu system and store as the first Quest. Therefore, this Oculus Store and Oculus link offer many wonderful VR experiences – which are tracked through your Facebook account. Unfortunately, you still can’t log into Quest 2 without a Facebook account, but it does give you opportunities to get software without needing a PC – such as games as Beat Saber and Tetris Effect and many more.

You can use a USB-C cable to connect the Quest 2 to a PC and so access the software library there too. The cable length and flexibility does not detract from the quality of the VR experience too much – and you still get to play these games for less than playing on the Rift S.

You may think it odd to opt for a standalone headset and then tether it to a PC – however – the PC improves the graphical potential of the headset and means games like Half-Life: Alyx are exceptional. The other reason to move to a Quest 2 is because Oculus are phasing out other headsets. 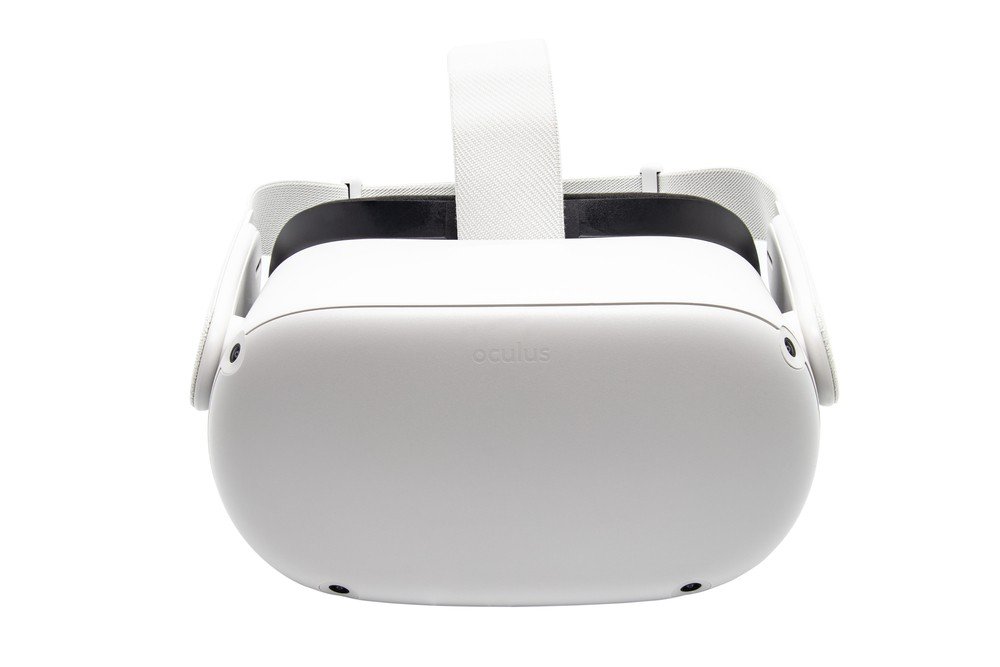 Quest 2 is the same system as Quest 1. This allows you to draw the boundaries of your play space so your headset warns you when you are out of the area and about to bump into something. This works really well and it remembers areas, so you don’t have to keep setting it up.

The head tracking works well and is accurate. The four cameras constantly scan and track the area and the internal sensors track orientation. The cameras also track the controllers, improving motion tracking as well. Consequently, you have a full six-degrees-of freedom, where you can move anywhere and look anywhere.

What is noticeable in Quest 2 is the improved display thanks to the higher resolution. The image is much sharper and there is much less pixelation. It is just a cleaner and crisper experience.

Playing Tetric Effect was a great place to start with the Quest 2, where the beauty of the game is in the images and sound combined. It also requires a precision that is perfect from the Quest 2 controllers. You will need to practice though, as those controllers are quite sensitive and you will be prone to many accidents when you first start.

Playing on Gun Club VR proved to be an excellent experience. The headset tracked my controller movements impressively and I was able to aim perfectly at the pop up targets.
Beat Saber and Supershot VR also played well in the game, with the headset tracking the rapid movements well. Beat Saber would have tested this to the limit and was really impressively accuratel. It will be even better with the 90Hz refresh rate.

Finally, the use of the headset to watch VR was worthwhile too, as the headset allowed you to simulate the cinema screen in your living room – and the experience is so sharp.

The best gets even better

The Oculus Quest was already ahead of the game and had brought some real innovation with the 6DOF head and controller tracking and the standalone functionality. The Quest 2 is an upgrade in most ways – a lighter tech with a sharper display and a fast processor. More than this though, it is all provided at a much more affordable price. Even if you end up tethering the headset to the PC, it is still a high-quality piec of VR technology.

Therefore, we would highly recommend the Quest 2 – for the variety of games and the accuracy when playing them – and the wonderful display quality. What is more exciting though is that Oculus have left doors open for constant improvements. Sure, you are forced into a Facebook login, but this in itself will help the platform design games and experiences that you will enjoy more into the future. For us, selecting the Oculus Quest 2 is a no-brainer when choosing your mid-level price virtual reality technology.