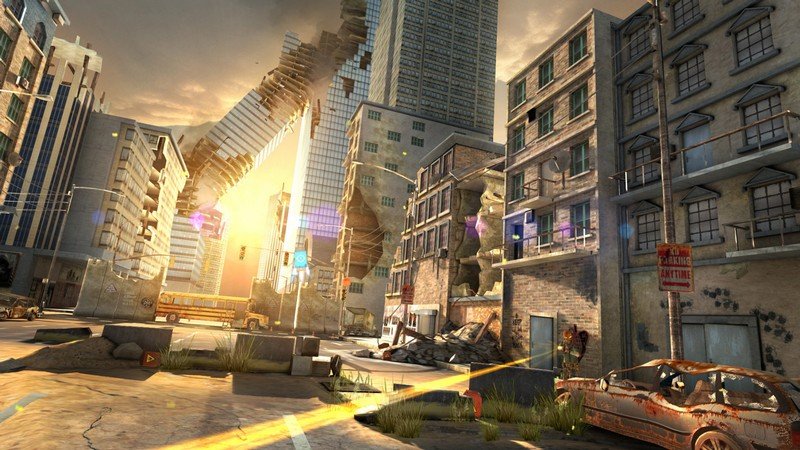 Released Mar 2017 3.9★
Welcome to the future. It’s grim and dark. The ever-oppressing Faction wants everyone to follow and obey. They will stop at nothing. People are scared. Demoralized. The few who fight back are painfully outnumbered. They need hope. Someone to show them the way. Will you stand up for humanity and fight for its future? Unparalleled gun customization with upgrades and attachments: Arm yourself with a massive arsenal of fully-customizable guns, ranging from classic shotguns, assault rifles, sniper rifles and machine guns to super-powered futuristic firearms. Change scopes for every situation – close combat, mid-range, or sniping. Lead the Resistance to victory over the evil Faction forces and their brutal killing machines. To survive long enough and become a legendary Resistance leader, you will need to master the art of deadly precision. Without it there will be no hero. Only bones left in the sand. Do you have what it takes?
(also playable on Oculus Rift) 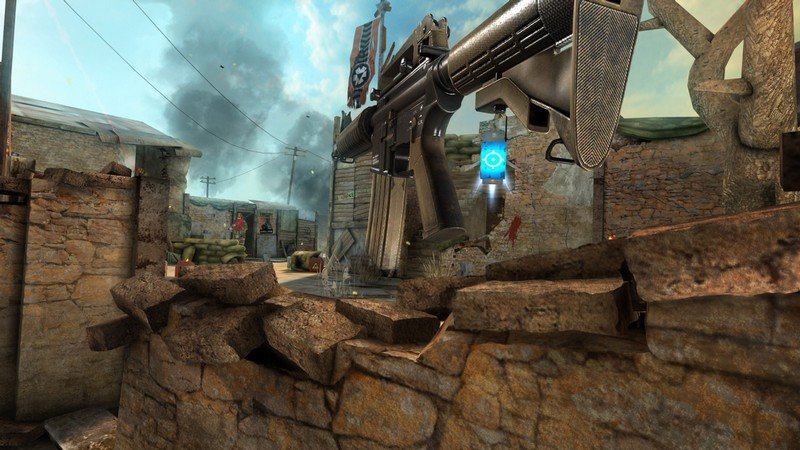 Chris
Feb 06, 2019
★★★★★
This is one of the few games I have seen so far with my subscription that would be worth the cost to buy it. While the graphics are not superb, the game play and menus work flawlessly. Compared to many other games I have tried, this is worth your time…if you aim to kill.

VIVEPORT User
Jan 07, 2018
★★★★★
This game is definitely a 10/10. If you want a game that is going to show off the vive and provide you with hours of fun, this is it. The graphics are not insane, but do create the submerging effect needed to put you in the fight. This is how all gun fighting games should be played. It will make you engage yourself with the actual movement of what it feels like to be caught in a crossfire. I am a retired military vet, and this game is wonderful at its aiming in the gun with laser and holo sights. I am very surprised to see that you can use cover the way it is ment to be used. You do not sit right behind the cover but some feet back and work your angles. This game effectively implaments this and it shines so well. I love this game, it is the best FPS right now that I have played with the HTC Vive. 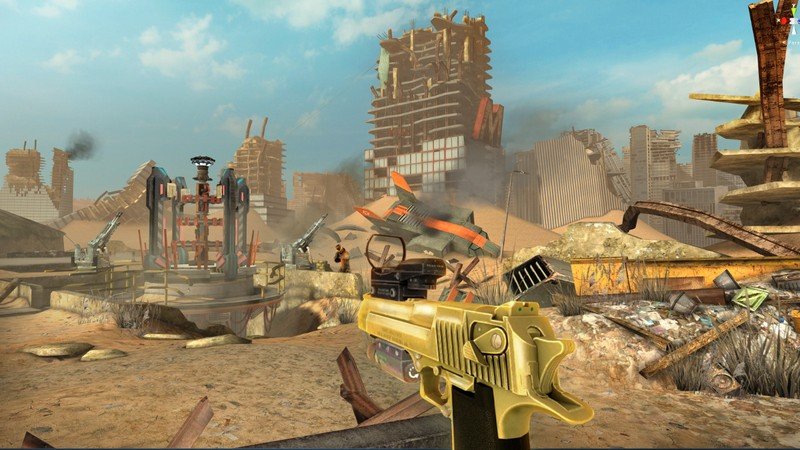 Thomas
Sep 18, 2017
★★★★★
We love this game! It takes some getting used to, but once you figure out reload, weapon change, and bazooka/helicopter support, this game immersive and engaging – especially for room scale players. This is the one I use to show off the Vive!

Stuart
Aug 03, 2017
★★★★★
Great fun. Everything VR should be.
Engaging, immersive and physically demanding.
It’s not the most polished experience in terms of gameplay, but I definitely enjoyed myself for the past 2hrs.

Trevor
Jul 07, 2017
★★★★★
honestly i wasnt expecting much but i really found myself enjoying this game the headshots feel great large selection of guns and it ran smoothly not sure if ill buy it but definitly get it with my subscription again

Blake
Jun 12, 2019
★★★★★
If you’re looking for a fun shooter on infinity, this is it. Tons of cool gun customization and plenty of levels. It reminds me of the scene from Suicide Squad where deadshot is on the car shooting all those bad guys.

chris
Mar 11, 2019
★★★★★
favorite shooter so far, has me crouching behind my couch for cover, laying on my back trying to get a good angle on that sniper. Tons of fun 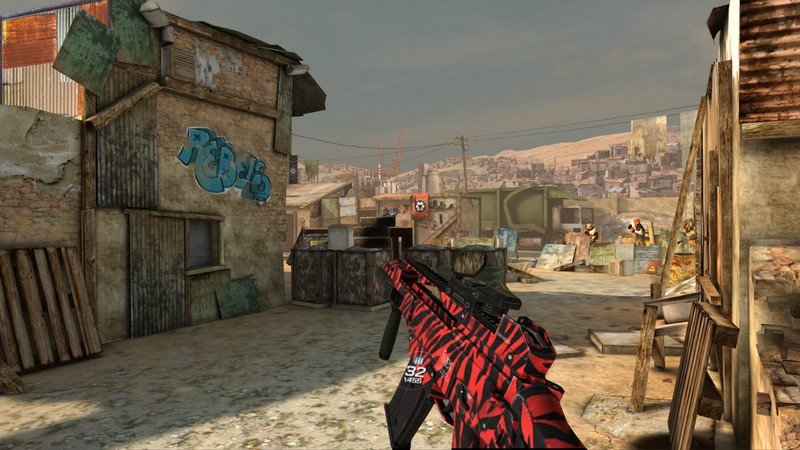 Simon
Dec 23, 2018
★★★★
Graphics are pretty, the gameplay is not bad. You teleport from cover to cover as each section of the mission is completed. A polished game, but ultimately it’s “another” wave shooter. Nothing groundbreak, but also nothing wrong with the game.

Chris
Jun 16, 2018
★★★★
very fun game, had me crawling around the floor to dodge bullets and get sweaty.
I don’t like some of the achievements are practically impossible though – I don’t get the combo stuff or finishing the board ridiculously quickly.

Custom
Mar 09, 2018
★★★★
It is so far the best shooter I have played!.. Upgrades for your guns. Armor sets. I love it. The only thing I found wroung was you have to tilt you contorler a little to far forward to ADS. It dose strain my wrists in long play times and turst me you will be in it as long as your controler batts hold out.. Great job fix the ADS thing it it would be one of the best!

Nils
Feb 06, 2018
★★★★
Its fun, it handles like a dream, the guns are cool, customization of the guns is REALLY cool, the graphics are okay. It glitches sometimes (left controller completely disappears after shooting the RPG and it doesnt come back till restart), one level just doesnt end, with no new enemies showing up and there is a giant wall of guns but you cant use most of them. I just wish they wouldnt have given up on this game because the it could have been perfect with just some more guns, levels and a bit of polish. Also: the “Super-powered futuristic firearms” cant be played, one of them can be seen on the “gun wall of disappointment”, but it is cut from the game so you can add false advertising to the list. Same with Machine Guns, there are just Assault Rifles, 2 Snipers, 1 Shotgun, 2 Pistols and some SMGs. But the things that actually made it into the game are still pretty damn amazing.

Greenlit
Jan 04, 2018
★★★★
Duck and cover! The Overkill series leaps into VR with impressive results that’ll keep your heart pumping and your guns blazing. Taking gameplay cues from classic arcade wave shooters like Time Crisis with a pinch of tongue-in-cheek humor in the style of Duke Nukem, Overkill VR succeeds at crafting a well-paced and physically demanding action experience that must be played with room-scale VR to appreciate.

Brett
Oct 24, 2017
★★★★
Pretty good game, hard on the knees but doable.
I gave it 4 stars because I spent 20 minutes literally trying to scroll to the shotgun and not past it to add it as a secondary weapon, just to find out that I was $1000 short.
Please for the love of all that is holy, let me just select a weapon over by clicking on the trackpad, or swiping. Really, anything but click and drag as that doesn’t seem to work well. I might buy this game, but that would need to be fixed first.

Ryan
Sep 16, 2019
★★★★
Great game, love the immersion & upgrades. Needs some Valve Index love for 5 stars though. Nothing worse then when things get intense and you tighten your grasp on your weapon only to find it no longer fires because you apparently ejected the mag. Rebindable actions allowing the use of A/B buttons would help tremendously.

The games mechanics are very good. I have had the opportunity to play other FPS VR games and Overkill is one of the few that get the underbarrel grip correct. Its smooth and automatically attaches your hand to the underbarrel grip once you bring the controller close enough and this allows for easy and efficient play. The reloading, shooting and switching between weapons is very smooth and efficient.

Another aspect I enjoy about the game is the gun customisation. In the armoury you are able to customise your loadout from different stocks, barrels, sight, etc, it really allows you create a gun thats unique to you.

The mission styles do become repetitive in nature but are none the less executed well. The limited movement work very well in this case. But would like to see more!

Samuel
Feb 24, 2019
★★★
It’s a wave-based cover shooter with a gameplay loop like a phone game. You defeat waves of enemies, teleport to the next cover position, phyiscally crouch behind this cover, and repeat. Missions last a few minutes worth of waves. Beat them and collect stars which are required to progress to further missions, or repay old missions to collect stars until you unlock the next mission.

Guns feel decent to fire and there are upgrades but most of them just add incremental stat bonuses and don’t really change how the weapon is used. The combat is otherwise somewhat boring and for a VR game feels pretty static with the exception of ducking behind cover, RIP your knees. Enemies pop up and stand there, you shoot them, and another pops up in their place. I generally found myself just crouching (or literally sitting) behind cover and popping enemies one at a time until the level ended.

Marald
May 28, 2018
★★★
Only played a little while as room temperatures are currently around 37 degrees Celsius. Reminded me a lot of Front defense, but a little different setting. Wish I could teleport around the first room, just to look everywhere. Gameplay was nice. Try and maybe get hooked. But also try the vive studio version.

Spaz McBomb
Jan 18, 2018
★★★
This would have been great in early ’17. Now in ’18 there are so many other choices pushing Overkill to average if not just below. Now this feels more like a phone VR game adaptation of early lightgun shooting galleries.

Fil Arkonus
Oct 19, 2017
★★★
Cover Shooter. Seems well fleshed out but I found aiming really difficult in this game, it was hard to focus on the iron sights and when I did it seemed like the bullets weren’t going where I was aiming. Maybe it just takes more getting used to. I also hit a bug when loading the map screen the first time (it didn’t load, had to restart the game). Overall the game is reasonable but nothing I feel the urge to come back to (or pay full price for). This is however great fun to watch other people playing, especially when they try to lean on the cover that isn’t physically there! Heh.

Matthew
Jul 13, 2017
★★
Can’t get past the first minute of the game. Once I empty my first clip, nothing works anymore. This is a broken game in its current state.

weberconstrutora
Jan 20, 2018
★
this is not working. I added to my list but the game doesn’t start.

kowdah
Jan 13, 2018
★
The left conrtoler stoped working, there was no possibilty to change the gun duing playoff, realy busted the fun.

Bjørn
Dec 17, 2017
★
I could have been good but it is not. When you shoot someone they have a health bar so you are required to shoot them multiple times. This is not fun. I wan’t one headshot – one kill.
So i won’t be playing this game in the future.

Henriko
Oct 30, 2019
★
with my new htc vive game doesnt work properly, when i am holding a gun, any gun it holds it from magazine but not from stock lol.