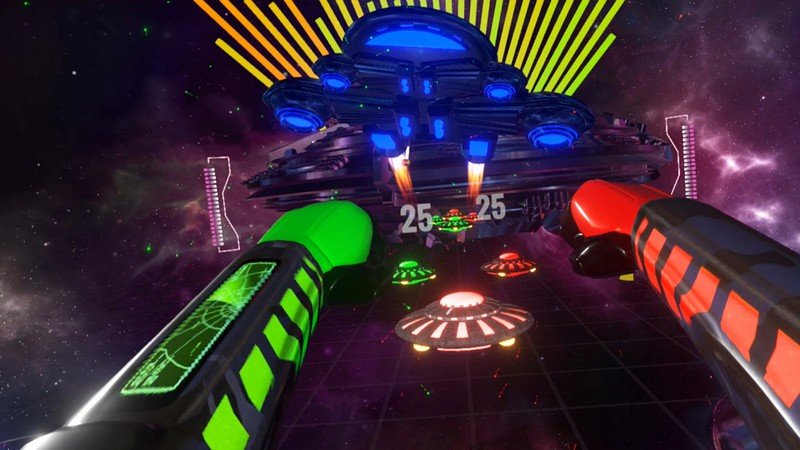 Released May 2019 3.5★
Rhythm Defender is a unique VR Fitness Rhythm game where you need to destroy the Ufo’s that are trying to invade Earth, and where you try to destroy the mothership, all this while being synced to build-in music tracks or your own music.

* 10 Build in songs with 4 difficulty levels, plus a song for the bonus round.

* Unlimited importing of own mp3 files that will be converted to Ufo attack waves in seconds.

* The harder you hit the Ufo’s or projectiles the more points you get and the harder the workout.

* 4 difficulty levels: Easy, Medium, Hard and Hardcore with saving of high scores for each song.

* Special Bonus Stage if you destroy the mothership.

*Headbutt feature to hit the alien projectiles back to the mothership.

* Duck and sidestep away from the lasers from the mothership.

* Online Leaderboards for the included songs. 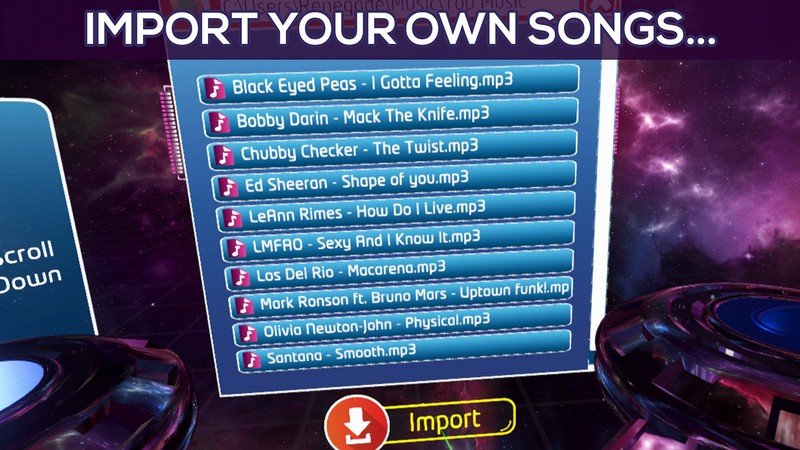 Doug
May 14, 2019
★★★★
Included songs are unfamiliar to me, but work rhythmically to the action. Beat recognition is very poor on my imported songs, which have strong beats. Performance on GTX970 is constant reprojection, but Steam’s Motion Smoothing works well with this game. No option to turn off vibration.

Jeremy
Nov 12, 2019
★★★
A twist on the “classic” rhythm game, with the ability to import your own music out of the box. Quesionable design choices and hit detection would otherwise make it hard to want to keep playing.

David
Jul 29, 2019
★★★
With other rhythm VR games out there like Beat Saber and Box VR it is hard not to compare them. I like the take on this one. It’s like you are defending the earth from an alien invasion by punching the spaceships while dodging laser attacks and reflecting shots back to the mothership with you head in an attempt to destroy it for a bonus stage. However, even with the built in songs it just felt like they were just spitting out ships with the music just being a background song. That felt even worse with imported songs, which I thought is a great idea, being able to import your own MP3. However, it had nothing to do with the song as far as rhythm. Punching the ships also got boring quick because it didn’t matter how you hit them, just faster did give higher points than letting them run into your hands. The body types looked different in the streaming screen than in game too.