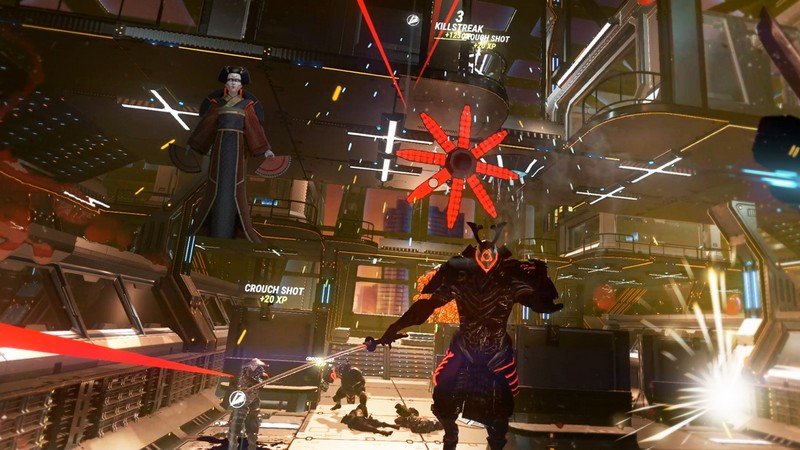 Since its launch, Sairento VR has been gaining fans worldwide with its unique locomotion system. It is the one game in VR that allows you to experience the iconic “bullet-time” scenes from The Matrix, blended with the slow-motion mayhem of the Max Payne game series, all while looking and feeling as badass as the Bride from Kill Bill.

Sairento VR was designed to be easy to pick up, but tough to master. The more time you spend with Sairento VR, the better you will perform the moves in the game and the more you will be rewarded with the unparalleled feeling of being the action hero of a big budget move production.

Although Sairento VR Lite is a ‘slimmer’ version of the hit cyber ninja game Sairento VR, it is still an awesome experience because you will still be able to leap 15 feet into the air, slow time down while you blast away at an enemy before landing to deliver a lethal strike with your katana on another. It is the same badassery you get in the full version – just with less levels, less weapons and without the multiplayer, endless and campaign modes.

And if you decide you love it, then consider buying the full game!

Note – Sairento VR Lite is a modified version of Sairento VR. The differences are described below.

The full game includes the following : 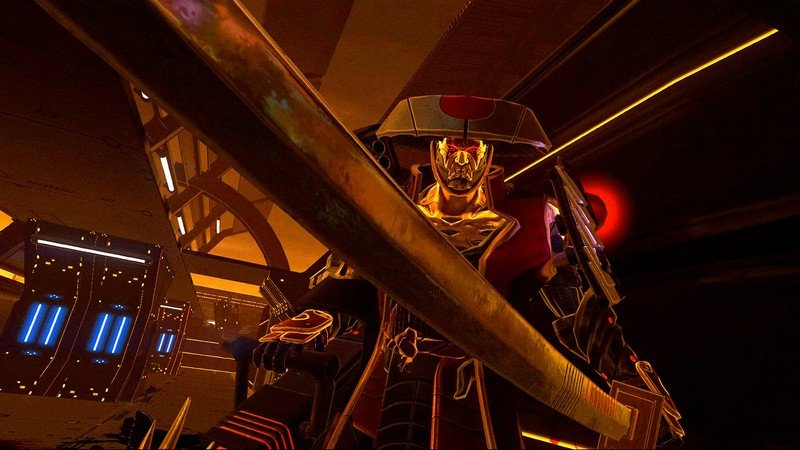 Austin
Jan 12, 2019
★★★★★
First off, this game isn’t really good while seated. I had to expand my play area a little bit so that I can swing the sword and stuff and not hit my desk/monitor (which I did while seated a few times).

But once you are able to have full range of motion with your hands and be able to crouch, OH MY GOD THIS GAME IS AMAZING.

I thought the trailer looked awesome. I wanted to be an IRL Genji, but then I found out mid game while messing around with the builds that you can also have a bow and arrow instead of a back sheathed sword…and let me tell you….when you start getting stealth kills with the bow, you will feel like an IRL Hanzo.

The demo seriously makes me feel like a badass and it gets me out of my chair for the first time ever. 10/10 absolutely amazing experience.

tcrafat
Dec 31, 2018
★★★★★
spend hours playing this and it keeps getting better every month! Just let me buy it for good already! XD

Anthony
Mar 25, 2018
★★★★★
I’ve only played for a couple of hours, but so far, its a blast! Jumping around and shooting in bullet-time is very cool. The melee feels a little weird, like if I ‘ported near and enemy and just touched him with my sword, he would get hit and usually die. It feels like it should take more energy, a real swing, to do damage. Anyway, I plan to put some more time into this very soon!

Brian
Jan 23, 2018
★★★★★
Having lots of fun jumping (and double jumping) around, taking out those techno-ninjas. I really wish I had the floor space to Room scale, and I can’t wait for the wireless adaptor because things can get pretty hectic and free movement would be a blessing. Recommend it for anyone who loves to do headshots while leaping through the air.

Inferno
Dec 21, 2017
★★★★★
This game really showcases the potential for VR experiences. It’s a blast to play and I look forward to purchasing the full version. 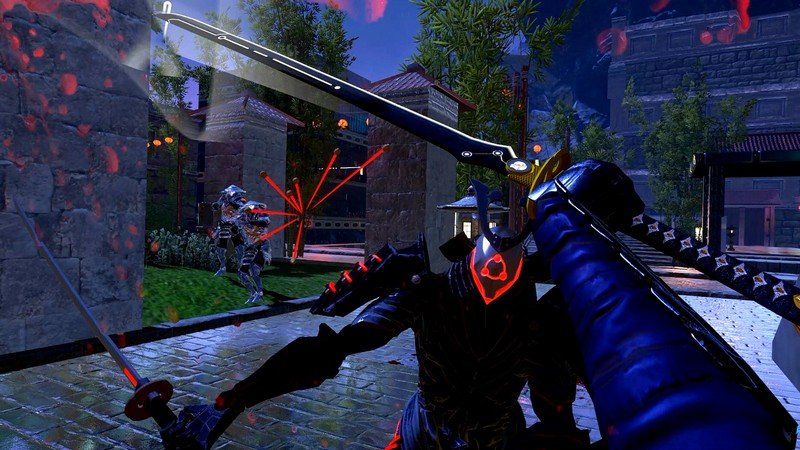 rethjack
Nov 29, 2017
This game is clearly a demo of gameplay for a full version, but having that said, it’s a ton of fun. I got a little motion sick from the default movement scheme, but there’s an option with less variation that works great. Several hours played already.

Cons:
AI is not all that smart. Sometimes they’ll walk through a door in a line, and as you shoot the guy in the front of the line, none of the other react and they keep on walking through one by one.

Fil Arkonus
Oct 31, 2017
★★★★★
This version of the game is quite accurately described as a lite version in that it seems to have captured a sweet spot in development that provides the easiest learning curve while giving the player a solid months worth of entertainment. In short it is perfect for a subscription slot. The gameplay is spot on, fast and fun and really makes you feel like a super-ninja warrior thing. After several games I started to get bored of fighting the same opponents, but there was still room for my character to evolve (More weapons, more skills, more power ups). Graphics are solid and the game seems bug free. On a final note I have since purchased the full game, which is considerably more fleshed out and well worth the cash. This lite version however was a fantastic use of a subscription slot for a month and I highly recommend trying it out for yourself!

Anthony Giovinazzo
Sep 15, 2017
★★★★★
one of the best VR experiences I’ve had so far. definitely going to need the TP Cast for this. I’m constantly getting caught on the Vive’s wire from moving around so much. double jumping through the air. slowing down time. slicing people up with the sword. all it needs is some kind of loose story to tie it all together

Trevor
Aug 12, 2017
★★★★★
I liked this game so much i bought it. To my surprise, i thought it would be a few more lvls and maybe a weapon or two. But the full game is much more much much more, youve got a weapon over both shoulders a weapon on both hips and a weapon mid back, youre walking around like an armed god, and you get armor! Plus i felt the demo was kinda easy but fun, the full game is much harder and the enemies are different. Im really glad i bought it, you should too.

Arizona, USA
Jul 28, 2017
★★★★★
Great game! Fun action, You can dodge and duck while jumping to enemies. This is a great game to get VR legs with as you can take “breaks” after a jump to let your mind relax. while you hid behind some boxes and let the enemies come to you.

Terry
Dec 11, 2018
★★★★
This game is….well, let me put it this way. Here are some good points and bad points. The GOOD points:The game is well thought-out, has great graphics, the missions come quick, you level-up quick, make money on the fly-buy better weapons, learning curve is not steep, and stealth-killing is cool. I did have a little trouble with the jumping and spinning off the walls, but i got used to it. The BAD points: I broke a lamp and a chandelier in my house playing this game! A couple bandages on my feet, a new lamp and chandelier replacement that will cost $120. So, for starters, I had to buy a new lamp and chandelier……Now, I bought the full game and am planning to play in a much larger and higher-roofed room…….I’ll fix the lights later…

NoRmAl nOrM
Feb 01, 2018
★★★★
This is a really good game, one of the best so far I have played. Get to shoot with guns and slay with swords. Very action oriented, so much so that I managed to smash my virtually brand new smart TV while going for the kill. If this had multiplayer it would deffo make it epic.

Heath
Dec 31, 2017
★★★★
This is a fun game! I must admit I got a little funny feeling in my stomach the first time I did a big jump. I was able to quickly adjust and was good to go but that first high jump caught me off guard.

CONS: You jump through buildings, obstacles etc and you don’t interact with the environment. I.E. You sword just goes through a tree or into a building. No interaction or stopping point. That is a major glitch in my opinion. It takes away from the immersion aspect. First several levels are way, way, way, way too easy.

PROS: You get to be a Ninja! Shooting, slicing and bullet time all rolled into one game. I enjoyed it and would consider purchasing but not at the current price. The price either needs to be considerably lower or a lot more work needs to be put into the game.

Definitely give it try though. I think most people will enjoy it but it does need some tweaking.

Hayden Meyers
Sep 17, 2017
★★★★
The game is good, but there are bugs like the controllers stop working in game, meaning I cant interact with the interface. I also have to restart 2-3 times to get a smooth start.

Risen
Sep 21, 2019
★★★★
This game rocks but the DEVs admitted that a Valve Index improvement update is in the works for oct-nov 2019, about 2 months after writing this review. So that set isn’t a smooth experience but Vive and other sets this game IS AWESOME! The only downside is the fact this is a LITE version of the game. Meaning it only has about 30% of the capability. The full game has multiplayer, more weapons, and more everything. But this LITE version is still awesome and make you come back many times. Eventually you will be like me and want the full version… GOOD NEWS! I bought the FULL version on steam(refunded after learning of the Index issues but I plan to buy once patched). AND MY PROGRESS CARRIED OVER! I instantly had my loadouts, abilities, weapons, and boosts setup. My level was retained, it was as if I had unlocked the full version of a game. MUST PLAY, but Index you might as well wait a bit.

Finding
Jan 13, 2019
★★★
This felt like playing an anime cartoon, its mechanical. I found it hard to get into. The game itself runs smoothly and is colorful.

StatutoryApe
Apr 19, 2018
★
The movement is probably the worst that I’ve encountered yet. You can dash and jump on a stamina limit, so you can move a couple of times before being stationary and to me that is just not fun in the least bit. If you could actually move normally then I would probably enjoy this much more. Two handing the smg is also horrible and wonky, hands don’t line up on the gun at all. The slow motion was really cool and parrying was also good but that’s about it.