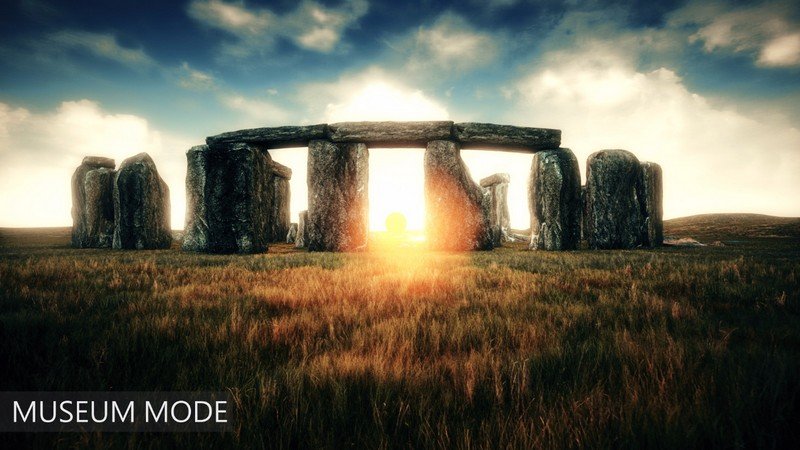 Released Sep 2016 3.2★
A profound learning experience enjoyed by thousands of families when it originated as one of the first room scale VR exhibits in a museum. With the new SANDBOX Mode, learning possibilities are expanded for people of all ages with the ability to build, paint and create their own ancient monument.

Stonehenge VR began its journey as a profound learning experience, enjoyed by thousands of families, when it originated as one of the first room scale VR exhibits on display in a museum. The first location was the Pacific Science Center in Seattle, Washington, and the second was the Museum at Prairiefire in Overland Park, Kansas.

The Museum Mode serves as a wonderful entry point for the first time VR user. Starting with a built in tutorial, it prepares people of all ages on how to interact in virtual reality.

This VR experience includes narrated voice overs, interactivity, and animations that will give you a new appreciation for its fascinating history and beauty as you travel to the world famous prehistoric monument in Wiltshire, England.

Designed to expand the experience for the home VR user, Stonehenge VR 2.0 with SANDBOX Mode puts minimal limitations on the creator allowing them to roam across the map and create virtual worlds on any scale desired. Build, paint and knock down your own version of the Stonehenge monument with motion controllers in real time. Design your own ancient monument around the original Stonehenge, or delete it and start in an empty field.

The SANDBOX is user friendly for the beginner with many tools to discover, and three types of locomotion options for the more experienced VR user. Many additional pre-made monuments for you to explore come built in to the Stonehenge VR SANDBOX.

Stonehenge VR Museum Mode Features:
– A profound learning experience of the Neolithic monument
– Voice over guided tour of Stonehenge monument in Wiltshire England
– Witness the Winter and Summer Solstice at different points in history
– Watch the sunrise and set through the stones
– English and Mandarin Chinese translations
– Native Vive support – Room Scale
– Fully interactive
– Virtual reality camera to save images of your creations
– Created in the Unreal 4 Engine

VoyagerVR SANDBOX Features:
– A physics based creation tool for all ages
– Build own version of Neolithic monument using multiple rock models and sizes
– Paint stones endless amount of times with eight color options
– Knock down your own structures
– Three locomotion options: Fly, walk or teleport to any location on map
– Design with NVIDIA VR Works integration
– Comes with pre-made monuments to explore
– Save and share creations using the Rama Save System
– Change the time of day on the fly
– Music player with Stonehenge VR soundtrack, or custom music files

After having his mind blown by VR in 2013, and seeing how the tech could be used for education, Christian Bretz decided to change careers and went looking for financing to start his first VR project. When he wasn’t able to get the financing necessary to hire a developer, he decided to teach him self how to develop VR software in the Unreal Engine using tutorials and information he found online.

Three months later he created the first version of Stonehenge VR, and less than a year after that it became one of the first room scale VR exhibits to ever be displayed in a museum.

First was the Pacific Science Center in Seattle, WA, then the Museum at Prairiefire in Overland Park, KS. It also became a launch title for HTC’s Viveport and has been featured by many tech and media publications such as, CNet, Variety and VRScout.

Christian and his Co-Founder Jessica Villarreal design all the software, and run the business themselves all out of their home in Los Angeles, CA. 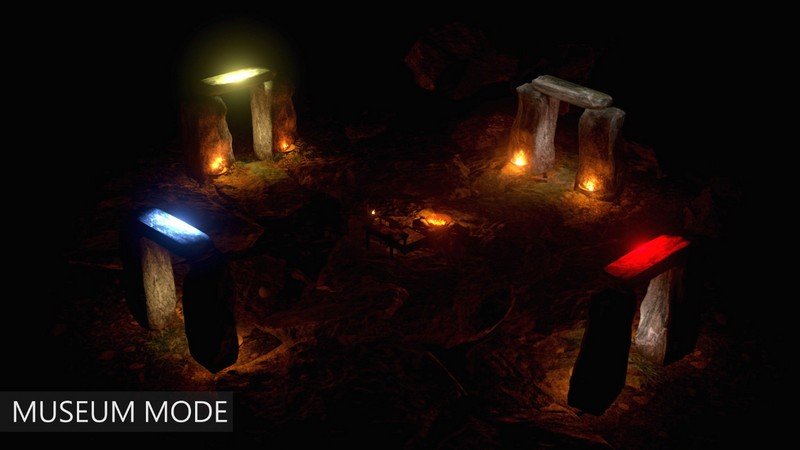 Angel
Oct 29, 2016
★★★★★
Love this experience was really informative very relaxing and well done. The loading station before entering the tour was really impressive clean and fun to look at and play around in. Being able to explore the environment freely was one of my most favorite things to do. I would love to be able to toggle music and day/night settings while in free roam, I believe that would really be an awesome feature, along with a toggle for the fire. Looking forward to the next experience definitely worth the price.

Dan
Mar 11, 2018
★★★★★
Very engaging! High quality concept, visuals, narration, and functions, although I did run into a bug when I dropped a block under the ground in the sandbox tutorial and couldn’t retrieve it. Museum mode is great intro to VR and sandbox is fun to play. Watch out for the floating rides if you are very sensitive — it is slow so shouldn’t bother most.

Greenlit
Jan 04, 2018
★★★★★
There’s a lot to love about this experience. Whether you’re in Museum Mode or Sandbox Mode, Stonehenge VR SANDBOX makes for a wonderful introduction to VR and Vive, all while providing an educational and creative platform that most anyone can approach. People of all ages will appreciate what Stonehenge VR SANDBOX has to offer.

Jason
Oct 17, 2017
★★★★★
Stonehenge VR Sandbox is awesome software. Very polished and authentic. Stonehenge is one of those places we think about as a child and were looking forward to trying in VR. This experience was more than I hoped for! It is also one of the experiences which everyone in the family can appreciate. It’s a must to try, especially if you are new to VR and want a superb first experience.

Josh
Oct 15, 2016
★★★★★
You can really appreciate the time and effort that went into this, although I absolutely love using the Vive for games, I’ve been anticipating greatly to use of VR as an educational device. I think Stonehenge is a perfect example of that potential. It’s a beautiful, interactive experience with breathtaking visuals. So far the most impressive app.
I’m so excited to see where this potential could lead, considering it has had such a powerful start 🙂
Great work! Please keep it up.

William
Nov 19, 2017
★★★★
Pretty neat, overall. But the floating platform that brings you to and from Stonehenge gave me instant nausea. If you’re like me in that way, best close your eyes for that part. 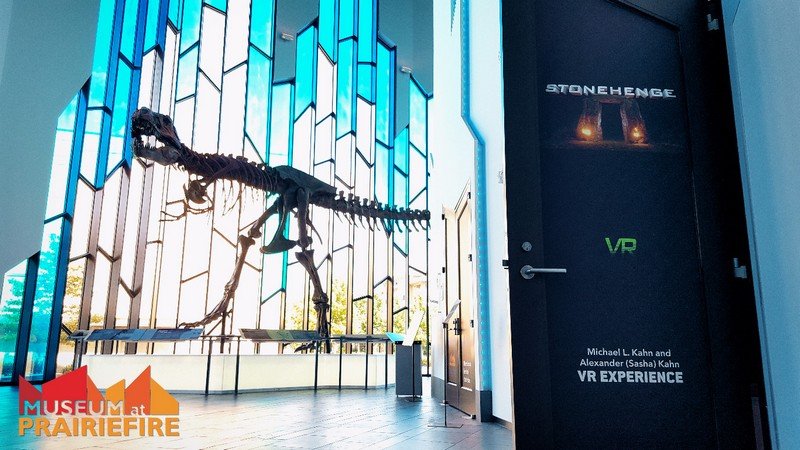 kesketufou
Dec 11, 2016
★★★★
Not so bad and interesting. The price is correct for the experience. Please increase the quality of the texture. But you are on the good way.

Erik
Oct 05, 2016
★★★★
Overall t was an awesome experience. I have loved Stonehenge for the past 25 years and never thought I would see it – this put it in perspective. A good amount of education and content and wasn’t to long

Also – developers are working on enhancing too so I am figuring that into the rating.

We need more content like this. Frankly I bought a Vive so I can learn just as much as so I can play.

db.lsgi
Mar 21, 2017
★★★
this has potential to be outstanding, unfortunately is too linear
i would like to see roaming with info kiosks, not a guided tour.

Marald
May 28, 2018
★★
Didn’t even make it to the sandbox, as I had to wait and sit through the very slow museum experience first. Which was probably great at the time of introduction, but looks quite dated now. Most people who will try this app now, are used to VR, the introduction in teleporting etc is completely unnessecary for these viewers and too long.(make it skippable) The voice over sounds a bit down. Not be able to teleport when you want, and having green flashes around you during the first explanation of Stonehenge didn’t make me enjoy it. I guess really good 360 Video ioor even better lightfield captured data, would be a better way to learn about this. But hey, maybe the sandbox is fun.. idk, and i’m not going to try either.

Tritan
Jun 01, 2017
★★
Hi guys, after start of the app I see only wire-frames of the stones and no explanation of the interface – button presses do not do anything. The video looked gorgeous though. I’d like to try the real thing after all.
Is there something wrong with the app maybe? Please, fix 🙂

Ian
Mar 24, 2017
★★
I found this to be a somewhat bizarre presentation where you are transported via some space aged high tech platform to a very romanticized depiction of Stonehenge with some odd additions including a floating axe head, a camp fire which you get to light and some floating models of the earth, sun and moon which have a connection to the dialog but in my opinion simply serve as a distraction from the tour of the Stones themselves.

Having been to Stonehenge many years ago and experienced the sun rise on summer solstice day I have to say the modeled henge looks reasonably accurate but is shown to lie in a hollow with the land rising closely all around it which is factually inaccurate; being virtually on the highest point of the surrounding land! The textures used for the stones are of poor quality too.

It provides a basic feel of what its like to stand in Stonehenge. Buy it whilst on sale!

Ron
Nov 25, 2016
★★
Stonehenge “as a place” seemed smaller than I thought it would be. there wasn’t much alignment to the stars? Narrator is rather slow as if trying to draw out the limited information. would be fine for free, but I’d not recommend this as a purchase.

Jean-François
Oct 21, 2016
★★
Had hard time making it not to crash…. Somehow good, but it’s really a on rail experience without the feeling of freedom…

Jaunty
Oct 02, 2016
★★
I can’t wait until this is updated. So much potential.
Right now it’s a great intro to stonehenge, but it could do so much more with so little effort. The hard work: textures/geometry for the henge & surrounding areas are done.
Allow the users to walk around. Maybe let them fly on that cool hex platform thing? Add a time slider (rotational movement on the trackpad?) to show the original henge with just the blue stones and allow you to slide forward thru construction (maybe show the scaffolding?), the priests at work at the henge, the completed monument and then the henge’s decay over time.
Allow the user to experience the solsite/equinox and the change of the seasons, show the 19-year cycle of the moon that the ancients figured out… so much can be done with relatively minimal effort.
Bonus points for having historically accurate night sky/stars for the year you’re in.

Thomas
Oct 01, 2016
★★
This is a very short, documentary style experience. Definitely not worth more than a few bucks. To improve this experience, I would like to see two things. 1) Please allow FREE ROAMING mode. I want to be able to move around Stonehenge and teleport around the area. 2) It would be really interesting for you to start the experience back in time, showing what Stonehenge may have looked like when it was first built. Then progress into what it looks like now.

Truly there is so much more you could add to this experience to make it more interesting. I hope you will read this feedback and make these changes.

Jan
Jan 05, 2017
★
Im afraid it’s difficult to say something nice about this one. Sound did’nt work for me and the overall experience is quite boring and cumbersome.

Mattedatten
May 05, 2019
★
Didn’t seem to play along with my AMD graphics, kept crashing, and at some point also crashed the driver, forcing it to restore itself. Never managed to get to the actual Stonehenge part.