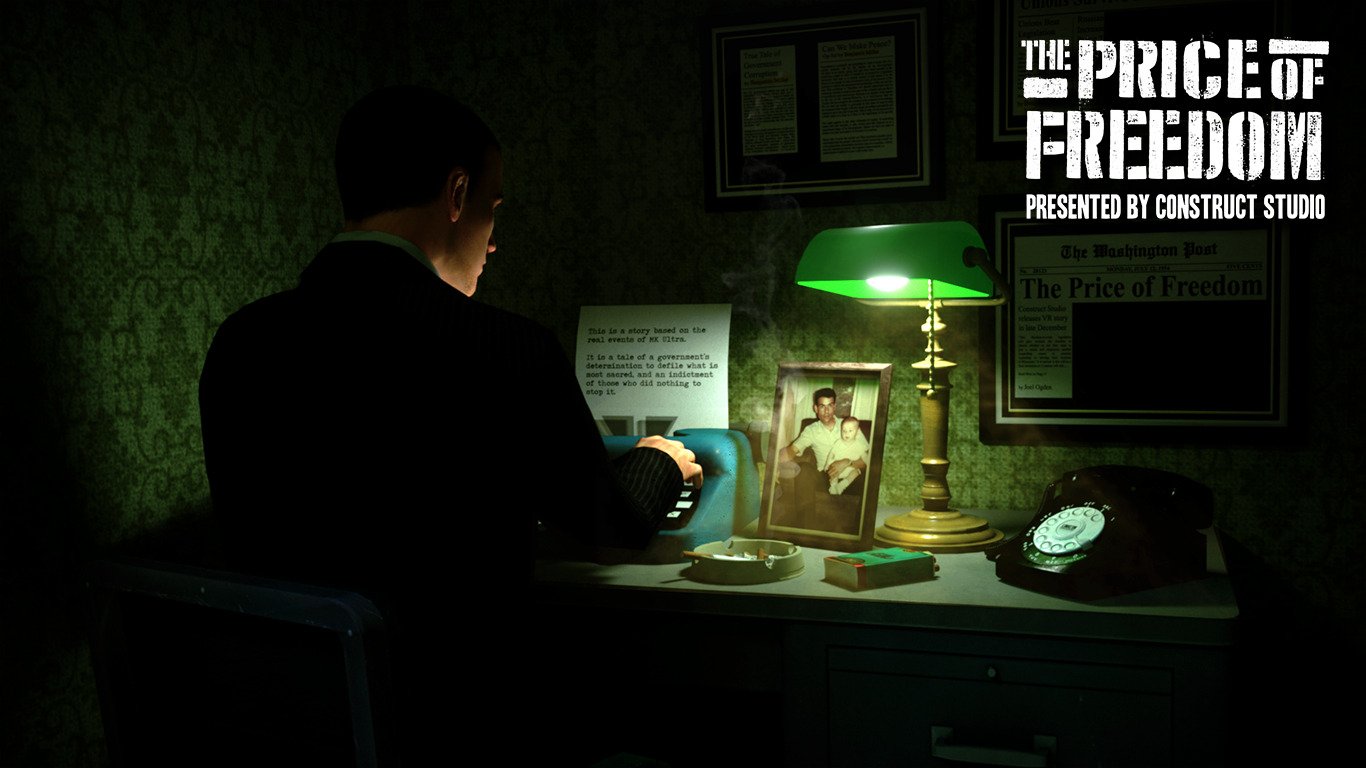 January, 1960. The US is deep in Cold War with Russia, and nuclear war seems eminent, when Benjamin Miller breaks into CIA research facilities, stealing valuable Chemical Weapons research. Your mission: assassinate Miller and protect this information from falling into enemy hands. What seems like a straight forward mission soon takes a dark turn as you learn the truth behind Miller’s motives.
Become part of the story in this thrilling interactive Room-Scale VR narrative, inspired by true events. 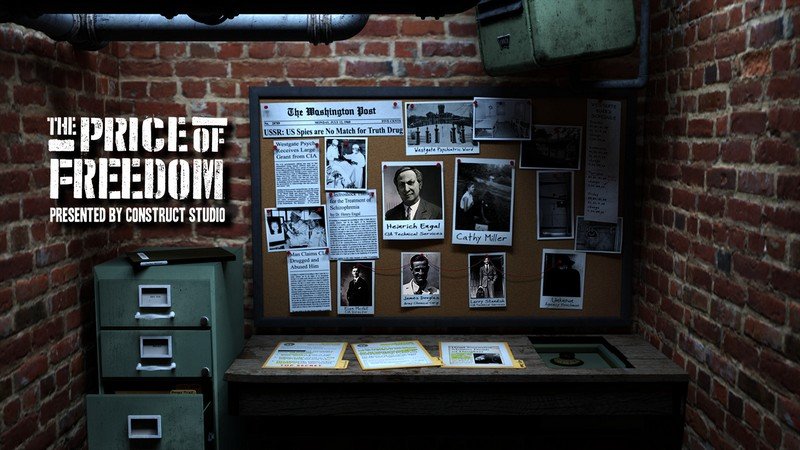 c
May 28, 2018
★★★★★
this is an amazing experience. a lot of work and details. great interaction and gameplay.. I wish that it would last longer… I will definietely pay for a game like that.

Greenlit
May 11, 2018
★★★★★
Construct Studio did such a great job putting together the experience in The Price of Freedom, and I’m glad that they decided to take a different approach to virtual reality than most developers have. While the experience is short, I feel like them focusing on what mattered, and what was important to them as a small developer was key to why this experience is so good. Instead of trying to create something revolutionary that would change VR forever, they instead set about to bring a small story to life with as much authenticity as possible.

To me, this was the smartest thing they could have done, and the effort shows. It’s the sense of presence that makes a difference in applications like this and being able to experience the Cold War era in virtual reality and think about the things I was doing made me ecstatic. I hope to see more from Construct Studio in the future, and I’m intrigue

William
Feb 22, 2018
★★★★★
Excellent game! That was a lot of fun. Very immersive… Very enjoyable… Hoping to see the rest of the story line soon! 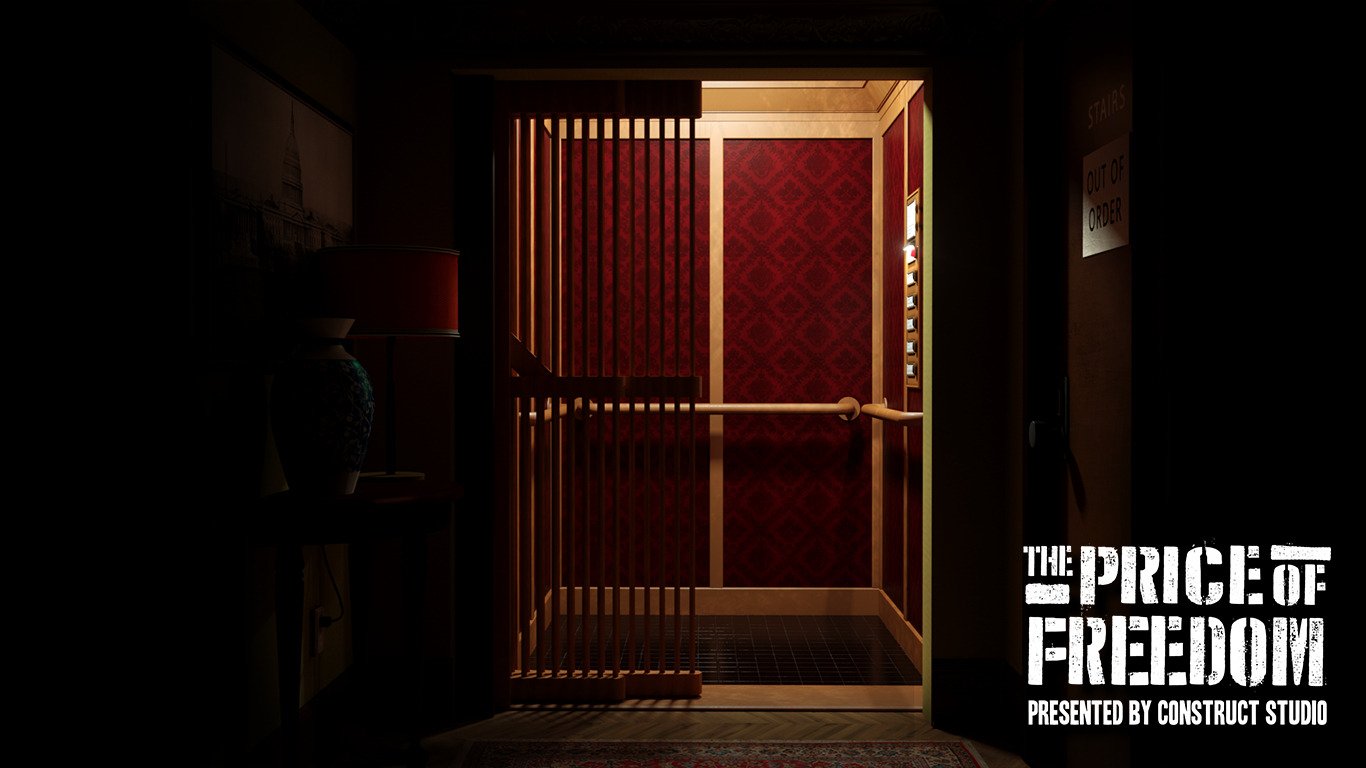 Lucas
Apr 28, 2017
★★★★★
This is the first game I’ve played so far where I felt totally comfortable disabling the “Chaperone.” The content is heavy and immersive.

Ben
Aug 22, 2017
★★★★★
I’m a film director that has had my work featured at Sundance. Playing this game instantly showed me where the future of cinema/gaming is going. I literally felt like I was a spy in a movie. Unbelievable. I would pay $100 for a full version.

CUPCAKE RANGER
Feb 03, 2017
★★★★★
GREAT! Super engaging story telling! I really like the different ways this game delivers story and moves the plot foward. Even tho this is just a short (FREE!) demo, it was highly engaging and made me excited for the rest of the game. I also love the historic setting and the plot setting. If the rest of the game has this quality, plus implementing free movement in bigger spaces, I’m willing to pay! 🙂

Geralt of Rivia
Jan 16, 2017
★★★★★
This game is a fantastic idea, with awesome interactive features, at this stage of development it takes about 20-30 minutes to thoroughly finish the game level and read all the letters, hopefully the rest of the story will get released.

Michael_westen
Aug 23, 2019
★★★★★
it’s short, but the story is the greateast that i ever seen. There’s a plot twist that is the best part of the game. if you play read all the notes, because without that you don’t i’l understand the plot twist

Finding
Feb 03, 2019
★★★★
This is a short story where you are a participant, in fact, the main character. The environment and interations are well done and the story flows well. You are teleported within range of interative items as the story unfolds and you enter new areas. The subject matter is one of social consciousness on the evils of unchecked power. Very powerful. It took about 25 to 30 minutes to go thru it but its a great experience.

Kristof
Feb 19, 2017
★★★★
Really good atmosphere, enjoyable puzzles, and at the end it really left me wanting to play more of this. I hope that the devs will deliver some longer episodes for this game. 4/5 because of the length, other than that promising game.

David
Feb 05, 2020
★★★
A short story with some minor small room-scale puzzle solving. From start to finish it is about 15 minutes even with reading all of the folders. It really feels like this an intro to a bigger game where you are the assassin and this is the back story. An experience that I surely would have passed up if it wasn’t included with Infinity. Interestingly enough, you can run out of ammo by randomly shooting and still kill Miller with no rounds.

gorbiWTF
Mar 15, 2017
★
Major bug: Everytime you click on something everything flashes white.