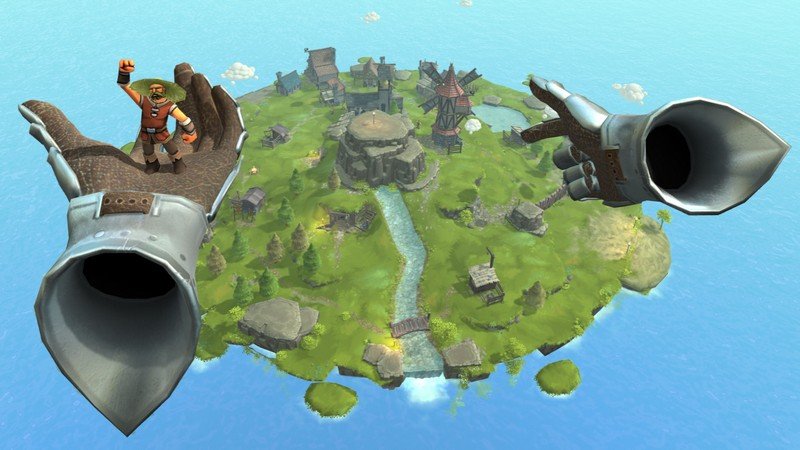 Lean back, relax and watch the bustling life of your villagers or actively get involved to speed up processes and move workers and resources directly where they are needed. You are able to seamlessly change between the all-encompassing view of a god and the detailed view of a citizen, able to follow the colorful life of your village. There is a lot to discover! But watch out for the Black Knight’s plundering hordes!

The game is currently in Early Access. We are excited to hear your feedback and ideas to make Townsmen VR an even better virtual reality experience in the future!

• Simulation: Assign jobs and tasks to your villagers to build your supply chains and economy.
• Town-planning: Unlock new buildings and place them freely within your village to optimize transport routes.
• Experience: Brush over trees, form clouds into dangerous thunderstorms, go fishing with your bare hands and talk to your townies.
• Interaction: Simply carry workers or resources directly to their destination to speed up the construction of buildings and production.
• Fight: Recruit brave soldiers, build catapults and protect your island from the Black Knights raiding henchmen.
• Tutorial: Your personal advisor Sir Clunk-a-lot will accompany you on your virtual tour of the medieval age with useful tips.
• Sound: Medieval music, adorable sound effects, and a classy English voiceover ensure a fitting atmosphere.
(also playable on Oculus Rift) 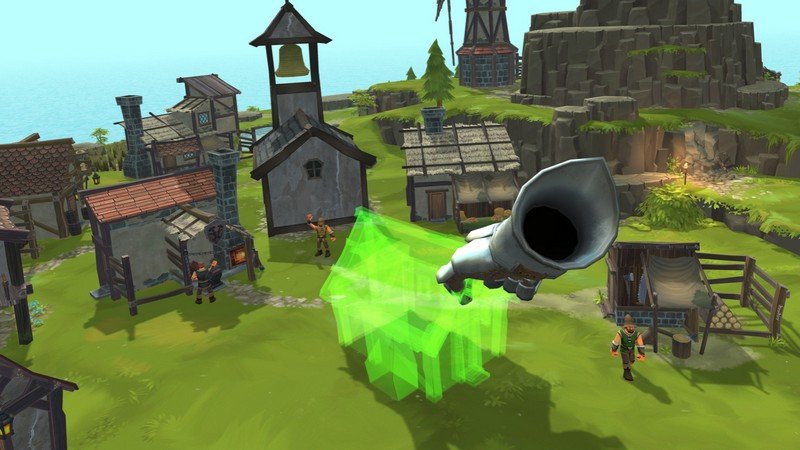 Dylan
Feb 15, 2018
★★★★★
Game runs great with and controls are absolutly amazing, although this is a tough 5 star as it is still in it’s early stages. If you are a fan of strategy sims I would highly recommend this game as it is definatly one of the best VR games I have played in this genre. I would love to see more updates with making boats and possibly traveling to different islands to capture/take resources. The fighting is smooth and the voice over for the tutorial is absolutly hilarious. Everything in the enviorment is interactive which is very refreshing. I am looking foward to see where the updates lead this game and if the developers are active I will have to buy this game rather than just using one of my viveport subscriptions on it. Side note: running a GTX 1080, 8gb RAM, and i5 and I have not experienced any crashes.

CrazyPantsLance
Jan 30, 2019
★★★★★
Love this, the level of detail and gameplay is top notch, i got this through subscription, but I will be purchasing to own.

gshaske
May 12, 2019
★★★★★
This game has excellent potential which I hope will be fully realized. This is a great example of how to create a city building game for a VR environment. The graphics are fun and the interactive interaction like blowing clouds and windmills (by actually blowing) is entertaining. Looking forward to addtional content and build area.

Simon
Jan 17, 2019
★★★★
The Settlers in VR. It’s cute, you have good control over your island and can zoom all the way in and out. Nice graphics, some cool features and all round nice little game.

Harry McMurray
May 26, 2018
★★★★
First impressions seem really good. Will be interesting to see where the devs take this game. Graphically it’s really impressive, movement is a little clunky but im sure once I am used to it, it will be fine. Keep up the good work! 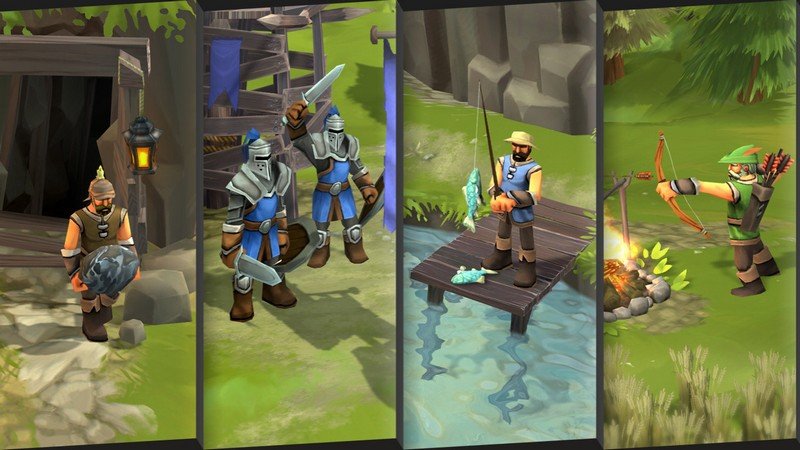 Margus
Feb 28, 2018
★★★★
Played it trough couple of times.
Good graphics, good details for closer look, nice surprises and control over the little island in the middle of blue see. Resizing and moving around is amazing. Followed one miner into the cave and back. Later played with clouds and resizing waiting a bird on his track. Then discovered dolphins and whale and spent some time underwater.
A bit hard is manually follow every citizen for grabbing and placing around for needed job if you are almost same size as they are. There should be available option automatically follow the marked worker or group for gathering. In menu should be option for marking all groups sorted by job or jobless status. Menus works well and looks super. Citizens should learn find a optimal path. And of course – the show must go on and should grow much bigger.
It is a very good example of so named virtual god workbench game.

Iv
Feb 26, 2018
★★★★
It has really good graphics. It is very interactive and fun. After your first battle there is no more. Hoping that they add more… like being able to send soldiers to other islands and if you win against them you get money or resorces and then you can expand your island and level up to unlock new things.

Greenlit
Feb 24, 2018
★★★★
All told, Townsmen VR feels really good. You can effortlessly zoom in and out as you overlook the map—you’re able to zoom in close enough to look like you’re on the same level with the townspeople running around on the island. This allows you to precisely plan out your town’s setup, which is definitely one of the things that I love the most about the game.

If you want a great town builder that gives you full control of the town, then Townsmen VR is a fantastic choice, and it’s definitely worth your time.

Neragov
Jan 13, 2020
★★★★
I have good expectations from this game. I do hope they include either a variety of challenging or amusing islands to conqour and colonise, or a campaign with more variety to the structures and units on offer. Either way, it was an enjoyable experience.

Stewart
Dec 03, 2019
★★★★
This could be something amazing. All the mechanics are there and it’s really well polished. We just need more maps and more buildings to unlock!
I’m not sure why the devs have gone silent and this remains such a short game after over a year as all the hard work has been done and it’s just a matter of expanding on it.

Christine
Oct 11, 2019
★★★★
I hope this game grows and gets bigger. It was very fun but because the island is small once you have built everything you feel ‘done’ with the game. Please keep working on the game. Bigger maps? More townsmen (towns women?) more things to build more objectives.

Reconix
Aug 29, 2019
★★★★
What a great little game this is, be warned though there’s not much to do after you complete the tutorial. Since there’s been no update for about a year it’s a real shame to see this game stuck where it is.
Really hope the devs are working on somthing.

David
Jun 04, 2019
★★★★
This is the type of “god like” sim game I was hoping for. Being able to control the people, build their village and help save them is all fun. The game play is simple and the animations are perfect. The tutorial is exactly what you need to get going. However, it seems like that is all this game is so far, the tutorial level. I know it is early access, but it has been out since Feb 2018 and really should have some additional maps/levels by now. I really would have loved to see this game go further.

Christophe
Mar 09, 2018
★★★
Nice, beautiful but much too limited even for early access
-bad pathfinding
-one small island
-no save or other
It looks like more a demo than a game, but it can be promising, it just needs more time an a bit of encouragements I guess (that’s why a put a positive mark).

Jaanus
Feb 25, 2018
★★★
I’ll be happy to rate it higher! I absolutely LOVE the idea, the feeling and the style but it needs more actual gameplay.

Besides the lack of real gameplay only problems I found were crashing and buggy pathfinding for the townsmen.

Not worth the buy in it’s current state.

Brian
Feb 15, 2018
★★★
Currently it is just the tutorial and you may get 15 – 20 minutes out of it. The modeling is great though, and movement controls, while starting off awkward, gets better with practise.

I love all the fun little interactions, and setting up your supply buildings and assigning villagers is really cool and fun.

But now I’ll have to mention the downside.

Once you’ve set up the buildings and completed the tutorial, thats the entire game! All you do from there is defend your island from a attacks that spawn from random directions.

This in itself wouldn’t be so bad, but there are hard locked limitations in place for how many buildings, and units you can get. So in between battles, there is very little you can do, and then the game just becomes grouping your units together to get to where the enemy land.

So essentially, a well put together tutorial, with great mechanice. But lacking an actual game.

Sarah
Jun 16, 2019
★★★
I had fun with this game while it lasted. The initial interactions were cute but not long lived. Starting off your town is exciting but eventually you run out of things to build and do. The game is over too quickly and there is not much advancement in your little town. I wish there was a bit more like having more islands or other areas to explore. I also had some trouble with the controls as when I would go to turn or move I would constantly be hitting things or making myself bigger/smaller making it hard to move around the map. I got this with the subscription but do not think I will be purchasing it.

ihsan
Jun 02, 2018
★
its a great idea but its like a demo version u can finish the game in 1 hour
and whats so damn annoying is people take breaks while working
soooo many long breaks

What kind of developer relieases a tutorial level without a game, and then charges full price for it!?!?!