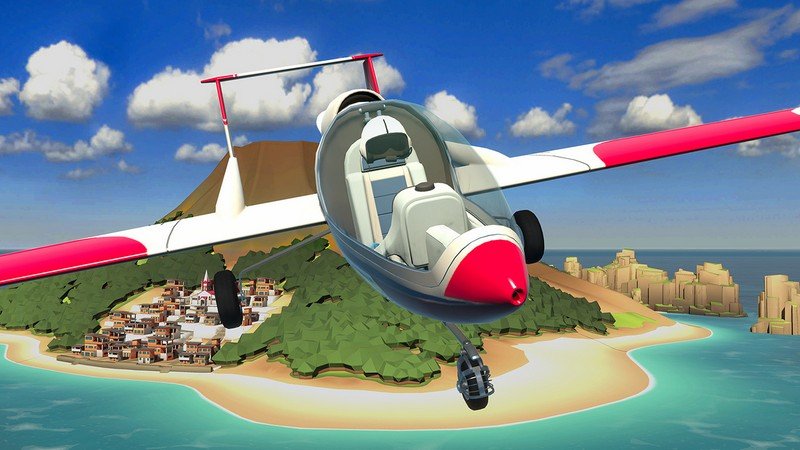 Released Apr 2018 4.3★
Ultrawings is the first aerial-themed, open-world game where you’ll pilot multiple aircraft to complete a variety of missions across an island-themed world.

The game features full tracked motion control support allowing you to use your hands to virtually interact with each aircraft’s flight instruments for a truly unparalleled flight experience!

– Earn money to buy new airports and new vehicles! Ultrawings is a VR game with progression!

– The world feels alive! Soar by flocks of seagulls, buzz other planes, and even fly by boats and cars!

– Full English voice-overs guide you through the game!
(also playable on Oculus Rift) 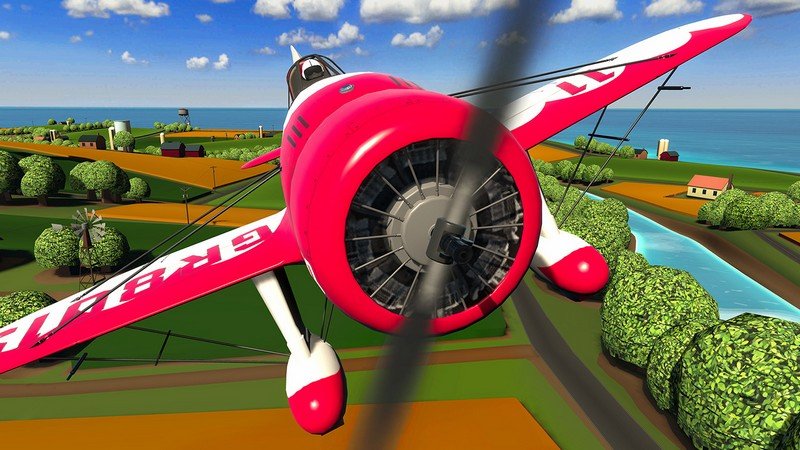 Ava
Oct 30, 2018
★★★★★
Ultrawings looks like a simple thing, and ultimately, it is. Don’t let that fool you though, this is what VR was made for. A light, casual pilotwings like experience where you’re in full control.

I love it, heartily recommend!
(Played on Oculus with Touch)

R
May 31, 2018
★★★★★
My first flight sim in VR and I am really enjoying it! Great environment to fly around in that feels alive with all sorts of aircraft darting around while you go from learning how to take off in an ultralight to having to maneuver a stunt plane through difficult paths.
Impressive and enjoyable gradual ramp up in difficulty and a well-paced progression through the variety of aircraft make this a fun intro into flying sims. A lot of challenges will require multiple attempts to get the gold and there is a real rewarding feeling when you do succeed. A lot of feedback through the controllers is appreciated in this title but also means there is a fairly constant drain on the controller batteries however, a full charge will give you hours of flying (or you could plug them in while you play).
Great!!

Thomas
May 17, 2018
★★★★★
Im really digging this! Its super solid. kinda got a pilotwings vibe which IMO is a good thing! if you looking for super realistic flight sim it might not scratch that itch. but if your looking for a fun, easy to pick up and play flying game look no further. deff worth a pick!

James
Mar 04, 2019
★★★★★
I’m just over 50% finished, after 2.5 months, and I have eight airports with eight dusty offices, and four great planes, that’s physics are perfect, and 20 grand in-pocket to boot. This tropical paradise is a joy to fly in.

The detail is wonderful. In the free-flight mode, I’m a barnstorming bachelor who’s escaped the drudgery of the continent and found an island getaway, with no politics, no hunger, and no troubles. If the digital population were real, they would drive me out of paradise with torches and pitchforks, because for fun I can wreak havoc on sailboats. Watch your wing, or you’ll go swimming.

Flawless flight; I have not found a bug. Targeting the center of a ring can require a different strategy specific to the ring, it’s tricky but satisfying to succeed. 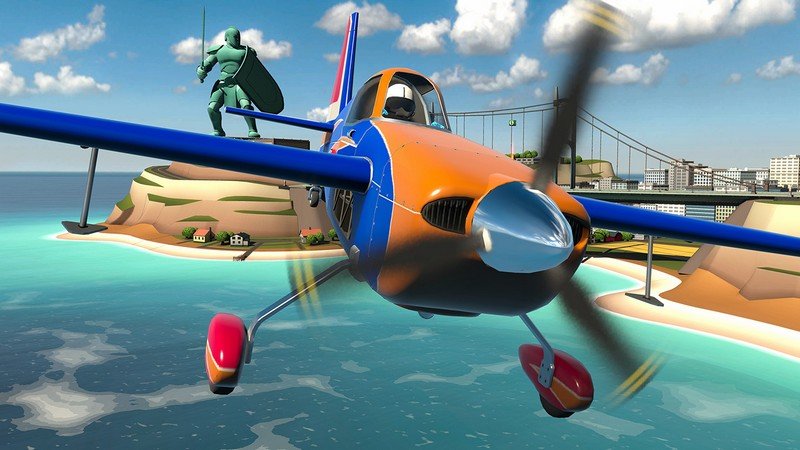 Michal
Feb 04, 2019
★★★★★
One of my best VR experiences till now. Here you can feel the power of VR..
For 1 month in subscription perfect. I am really thinking about buying it but I have already got all planes and airports.. It would be great to add new airplane and/or new island 3-4 times a year. Excellent job, thanx!!

Dariusz
Dec 18, 2018
★★★★★
It’s a very fun, sit-down, flying game. Has arcade and simulation style controls which you can switch between so no matter if you are a casual person or someone expecting some realism – you’ll find something fun here. Just mind you that controls are preddy basic overall and will require a lot of getting used to if you want to be precise as not using a joystick means you will have to find the center of flight stick yourself. One problem I encountered was that my head was very far back in the seat and resetting position didn’t seem to help. I resolved it by moving my real seat forward a little after resetting my ingame view. Other than that I found it to be pretty much what I wanted. Will play more once I get used to the movement.

bruno
Jan 21, 2020
★★★★★
I love it, with time i get used to pilot very intuitively
and this is really a pleasure to fly around in 3D.
but life is too expensive for me in those little islands
and I did not manage to buy all plane and airports.
why not make an update with cheaper airports, more islands
and maybe a bit of adventure with some people to meet ?

david
Sep 19, 2018
★★★★
seems pretty good to be honest. im about 20 mins in and its a nice game. its almost a more sophisticated version of the wii sports flying game. similar feel with the islands you can fly around. controls are simple yet effective. not something you could spend hours on. but well worth a look. certainly worth it for the month with subscription. *WARNING* motion sickness is very real in this game. you have been warned! if you are prone to it then maybe have lots of breaks.

Aadi
Oct 28, 2018
★★★★
Fun to try, worth a shot on a subscription but probably wouldn’t buy it separately since it feels a bit too cartoony for my taste. Give it a shot

Chris
Feb 01, 2019
★★★★
If you like flying this is the game for you. Lots of fun missions and games to advance thru. Unfortunately, the motion is tough to take for me. I could only go for so long before taking it off. Even so, I think it is pretty good but graphics could be better.

Mckmnstr
Nov 16, 2018
★★★★
I don’t get VR sickness often. I use VIVE RoomScale with no issues. I play teleport and locomotion games without issue. Playing this game for more than one flight in a row and I could loose breakfast. Nose dives, stalls, and hard rudder turns are the worst.
It has 3 different comfort modes to block peripherals and 2 flight modes. Arcade (no roll) and Simulation (simulation) style of flight. My favorite is sim but I personally cant last as long.
The interactive controls to the plane’s is awesome, turning on the fuel, starting the engine, playing with your flaps. Haven’t found a world map in game yet to direct me to islands for purchase however this is by far an awesome arcade flight sim.

Note to Dev: Please make grasping the flight stick have an option to be held instead of toggle.
7/10 Would puke again!

Omar
Aug 12, 2018
★★★★
pretty cool game.. been playing it on subscription for about two days straight and love it so far… still need to unlock other planes.. or maybe i have to purchase the game.. so far so good though.. i recomend this one

Stephen
May 25, 2018
★★★★
So far, I really like it. Just played it last night, but can’t get it to open this morning. Everything else works, but opening Ultrawings just takes me to the grey dome room. I’m assuming I’ll get it working again somehow. Anyway, The water textures could be better. even the textures that are there seem to have bugs with alignment and such. This seems like it would be more important seeing as how the water is a huge part of what you see. I’ll give it 4 stars anyway until I get more time with it.

Scott
Nov 19, 2019
★★★★
Played last year and had problems with controls. Came back to see what changed, Glad to see they have kept working on the game and added more stuff to do. It looks simple but dont let that fool you, it’s super fun. its a must try.

Troy
Jul 26, 2019
★★★★
I really enjoy this game. I keep coming back to it. It’s an obvious throw-back to Pilot Wings from the Super Nintendo days, I just wish the developer would add paraschute and jetpack missions… wink, wiink.

Ramón
Apr 15, 2019
★★★★
Amazing and fun flight “simulator”. If you don’t get motion sick easy, turn on simulation mode and do barrel rolls and loops all day 😀

Phil
Apr 07, 2019
★★★★
Couldn’t get this working initially, but seems you need to be seated to play. Once I got that sorted, hands appeared (they weren’t before), an I was able to play. First, find a chair with some clearance as you’ll be reaching to the side of you etc.

Also, play with the comfort modes, as pitching and yawing away in a plain can be quite nauseating.

Otherwise, it’s a well polished game with, not impossible, but a good challenge.

Andrew
Jan 12, 2019
★★★
If you have a Hotas, there are some lackluster instructions for manually changing a bunch of .cfg files to configure your own controller. It’s pretty confusing but it works. Once you’re in the game, the game is basically some light aircraft flying, works well. game is a bit boring, but it’s not a dog fighter, maybe that can come next.

Cassidy
Jan 01, 2019
★★
Fun at first, great simulation. A few problems, in the license area it tells me to bank the aircraft, but doesnt explain what banking is. I dont know what that is, I’ve never flone a plane, I’ve never heard of it. What is it? It tells me to adjust the rutters, what are rutters? Where are they located? How do I adjust them? If you can see here, the explanation for this game is just downright horrible even though I was in the tutorial mode. Unless I missed something in the begining that tells me these things (Even though I looked), or am I just plain stupid that I dont know how to fligh a plane before-hand?
Other than that “minor” issue, great game, very realistic and I like the comfort settings.

Laurent
May 26, 2019
★★
I was terribly sick playing this game (there is an option to limit sickness but it does not work with me).