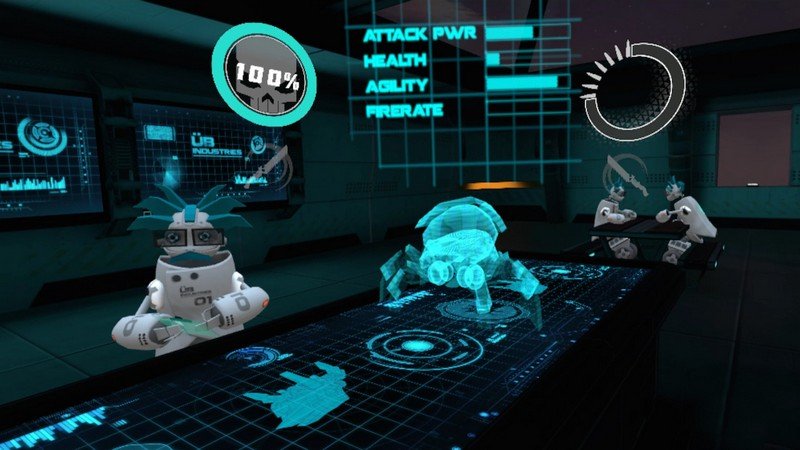 Released Aug 2017 3.7★
Behind the gates of their massive HN1 Facility, UB Industries reveals itself to be the evil corporation it really is, building a robot army in its evil plans to take over the world. But hope is all but lost in this world – as an elite infantry agent, Agent V, your mission is simple: infiltrate the fortified facility, seek and destroy evil robots and put an end to UB Industries operations once and for all!

VINDICTA, a shooting game with a strong stealth component, will you make you feel as immersed as ever as you find your way around UB Industries, shooting robots, ducking to avoid their incoming bullets and hiding to escape enemy fire! Discover 6 levels of VR action gaming and feel your heart racing as you pick up deadly weapons of all grades to fight off evil robots out to take you down!

Locmotion System: VINDICTA has two main locomotion system to choose from: the main arm-swinging locomotion which feels very natural inside a VR environment and a very smooth and responsive trackpad movement option. The choice is yours!

Precision Shooting: Shooting mechanic is on point! VINDICTA takes realism to a whole new level with a focus on stealth, tactical movement, and precision shooting.

Deadly Weapons: Handguns, rifles and cluster grenades are just some of the massive weapons you’ll be using to take down your enemies.

A Variety of Enemies: Shoot and destroy enemies that will come at you from different directions, in all shapes and sizes – including drones, mechanical spiders among others so watch out!

Scoring System: Different shots mean different scores! The scoring system is just the thing to add to the game its competitive edge!

Only one can take the top spot on the VINDICTA leaderboard and be the ultimate Agent V! You’ve got to ask yourself one question… do you have what it takes?
(also playable on Oculus Rift) 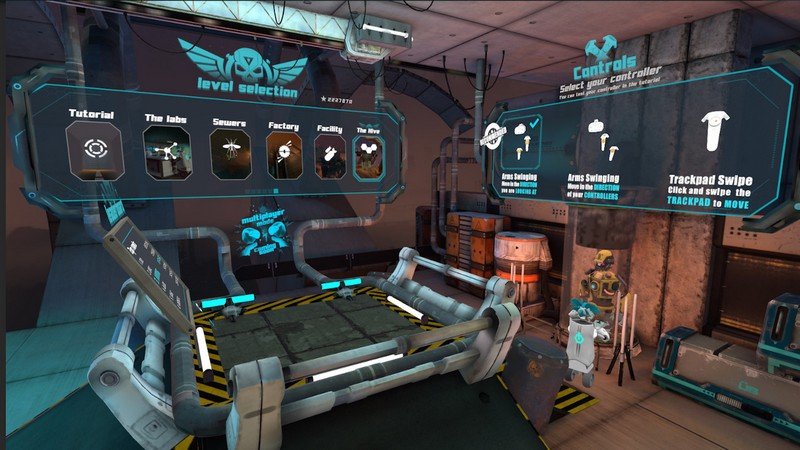 Doug
May 13, 2019
★★★★★
Awesome smooth locomotion run-and-gun game. I disagree with “strong stealth component” in the description, I happily avoided use of stealth for about 98% of the game. There’s even more climbing than there is stealth. Felt like about 5 hours long. Offers arm-swinging locomotion, but I can’t even imagine how you arm-swing while aiming. Also offers head-oriented movement… how would you strafe? The trackpad locomotion (which is oriented on controller direction) is decent, but could use a tweak… feels like it only offers movement on fixed cardinal trackpad sections rather than a free 360.

Finding
Dec 18, 2018
★★★★★
Love it! Running up on the robot guards, with swords, while dodging bullets is pretty fun!! Very much recommended!

Josh
Apr 28, 2018
★★★★★
I liked it a lot, things get a little weird if you are climbing and you grab the same peg/step with another hand. I prefer the second form of motion where you run towards your arms.

Bash
Oct 25, 2017
★★★★★
Having a lot of fun with this one! Good graphics and the climbing is cool too. Good choice of weapons. Tried to use my swords once when I an out of ammo, but was no match for a hoard of robots.

Balgias, Ornious
Sep 08, 2017
★★★★★
Pretty excellent job they’ve done here, I would possibly retool it though so that there’s a limited amount of enemies out a given point, the slightest misstep and or moment behind cover and suddenly you’re swarmed. Also yeah, might want to leave the shotgun pellets cached or something, the act of firing them causes my headset to flip out too. 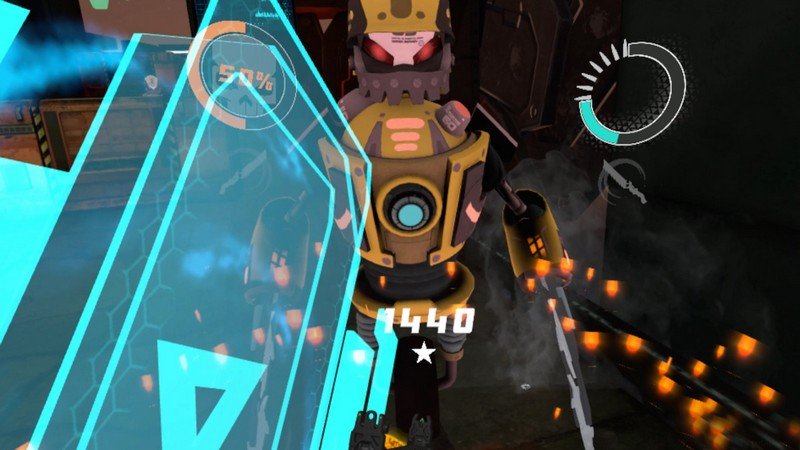 Landon
Aug 28, 2017
★★★★★
This game is awesome. The devs did a great job. Great immersion. Great sense of danger. So far Im very happy with my subscription. Vive is firing on all cylinders with these great titles.

Derick
Aug 26, 2017
★★★★
This is my first VR shooter and I got to say I love it. Tracks perfectly, weapons are varied and good. Sword doesn’t have too much usage though. And when I use the shotgun, every time I fire it goes into the loading screen very briefly, enough to get me killed sometimes.

John
Dec 12, 2018
★★★
This game is a bit of a gem to be honest. While alot of things are wrong with this game, there are alot more that are right. The overall campaign does feel “flat” and lacks any sense or real emotion or urgency however the core gameplay mechanics are actually nice.

If you like run and gun style shooters this is for you. I enjoyed the semi-fast paced action, agile enemies and oddly enough, the swinging arms locomotion which is pretty cool once it stops being annoying. Climbing in the game is a nice touch.

That being said, there are some issues that plague the game – holsters are clunky and often get in the way of world interaction. The “double tap” to drop mechanic is absolutely terrible, it fails to work properly, I’ve even died because I could not release a freakin gun. I took a star away just because of this actually.

Still a fun shooter and I enjoyed it.

Chad
Aug 01, 2018
★★
Not good. This game has bugs straight from the start. It asks for like 14 permissions to access the internet from my antivirus, then on the first area of the first level the key doesn’t spawn and it’s just the voice saying “Find the key!” and I see where it would probably be but it’s not there, so I want to reload the game but there’s no pause menu so I have to close VR and restart the entire thing, then the key is where I thought it would be. There’s too much climbing, and the entire gameplay is find a key, fight enemies that surprise you on the other side of doors or corners, climb climb climb, fight, repeat from key. The combat is the only good part about this, everything else in the level design needs a lot of work. I didn’t even get to the last level cuz of this huge loop that spit me at the beginning and I went in again and the one way doors locked me in. Get SPT for $15 instead.

Joseph
Jan 19, 2020
★
Doesn’t work. When starting the game it ask to put in a username, but upon doing so it errors: checking username(), “Unknown error”.

Kain
Aug 30, 2019
★
Will not work.
Stuck on choose your name screen, I enter my name and it says UNKNOWN ERROR!

Rene
Mar 16, 2020
★
First thing you’re asked is to enter a username. No matter what you enter, you get an error. The game is literally unplayable.