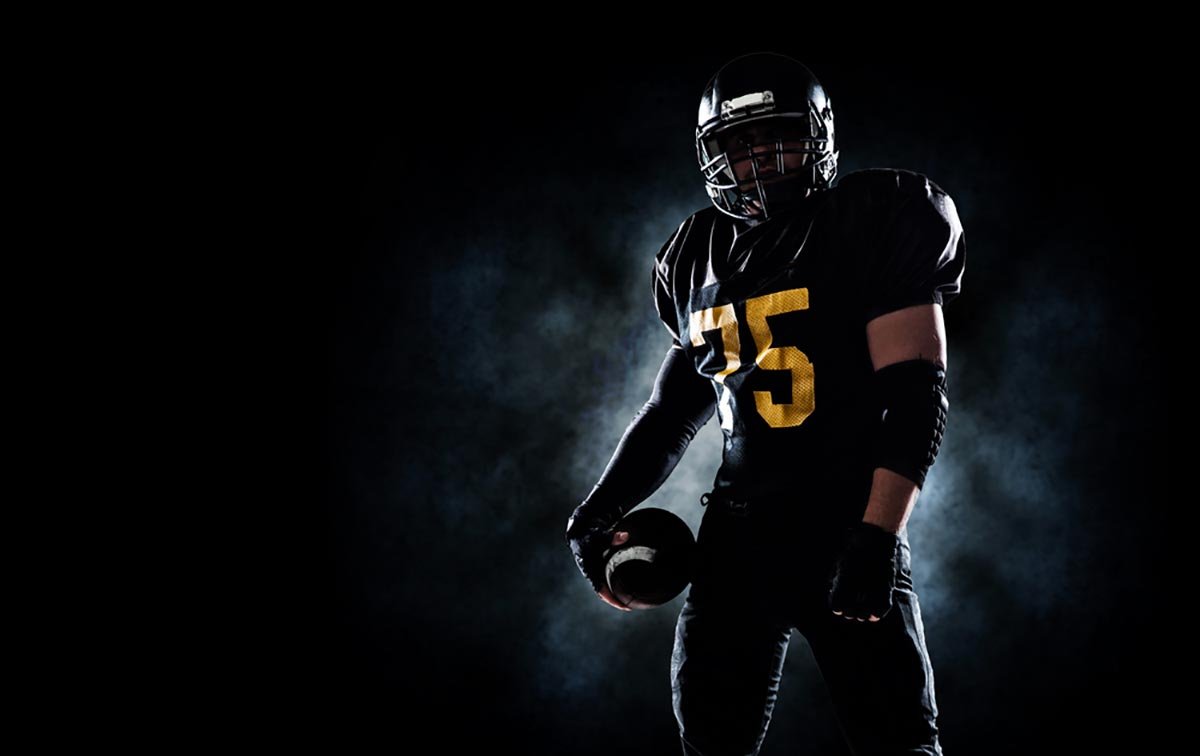 American football is part of the DNA of the US. It is a unique sport that demands teams gain territory. Two teams battle up and down the field, in attack or defence, seeking to add points to the scoreboard. For the viewer, the brutality of the action and an appreciation of the tactics are everything. Predicting the plays and countering with brute force makes this game so special. Imagine getting even closer to the action, where you can choose who to watch closely – whether it is the wide receiver or the quarterback or to keep your attention on the ten-yard line and the end zone beyond.

The importance of the NFL

Football has become one of America’s favourite sports and continues to grow in popularity and net worth year on year. There are a lot of reasons why American football competes with baseball as the national sport.

First, there is the sheer athleticism of the players. There is a position for everyone on the American football pitch. Brute force might do well for the linebackers but speed is essential for those receivers waiting to gather the ball. Our undying hope in the US is that we too can become rich, famous, renowned for our skills and talent – and American football maintains this hope.

Next, it can be a sport of poetic beauty or extreme and ruthless brutality. The amount of planning and preparation that goes into the game is beyond imagination. However, sometimes it comes down to how hard one player can crash into another to halt their progress. The crack and smash of the helmet and bone, and that flying blood and sweat.

Each year the world takes notice when the Super Bowl comes to town, as the global audience tops over 100 million viewers. The spectacle lasts the whole day, as pop stars take centre stage at half time and the winners become global superstars.

VR or virtual reality is beginning to gain something of a cult status. After the success of AR, or augmented reality, with the likes of Pokemon Go, the world continues to demand ever greater interactivity. While AR projects an augmented reality onto a real-world, VR takes the user to a virtual world completely separate from reality.

A VR is a 360 simulated world where you can sit and watch the action, choosing where you look or get involved in the play using user-interface (UI) devices. A set of goggles attached to your smartphone that is connected to an app can transport you into the middle of the game. Popular smartphone-powered headsets include the Samsung Gear VR and Google Cardboard. However, there are Sony Playstation devices that can also transport you into a virtual world. If you have some money to burn, you can buy headsets that attach to powerful computers and the apps will blow your mind. Take a look at what people have to say about Oculus Rift and it rival Vive from HTC. 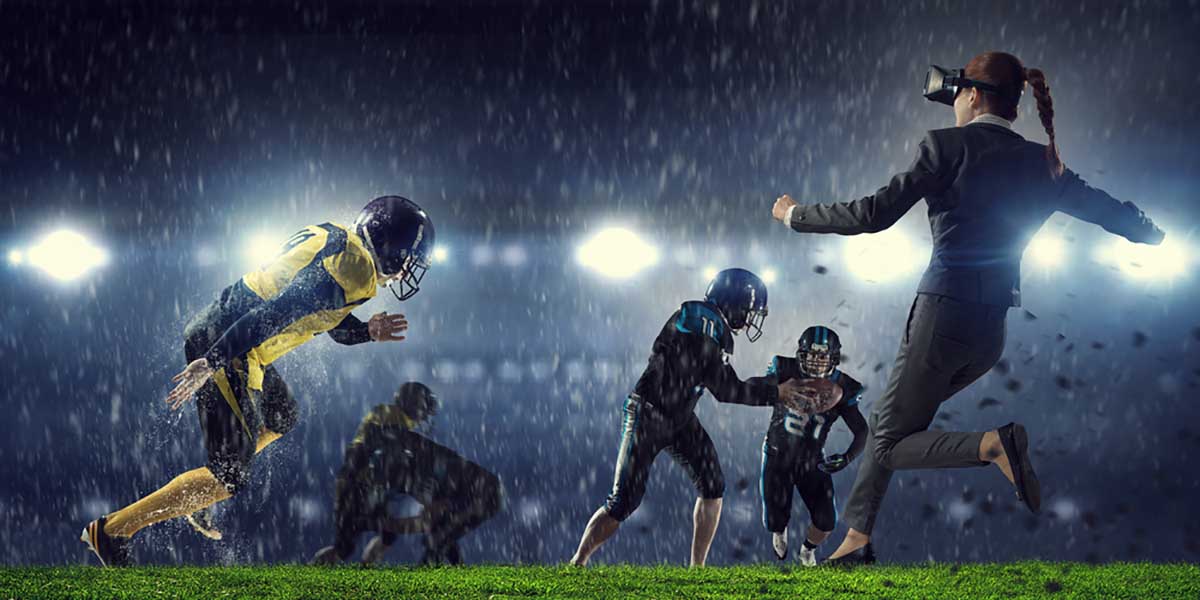 Despite the wonder of VR in NBA, the NFL has been slow to enter the world of virtual reality. It is no surprise, as bringing the ferocious action of the gridiron up close and personal offers a genuine challenge. Not only this but the NFL has made the development of a VR viewing experience challenging, as they use licensing to maintain a monopoly over television rights. It is also difficult to experience the game in VR, as you may be busy watching the Quarterback when the touchdown is scored. It is a game that is often best appreciated from a distance with an overview of the action.

In 2019 the Super Bowl was available on VR but the experience is still quite limited. In 2019, you still needed a dedicated app and the streaming in some areas is limited if there is no agreement with Fox. Your best option is to go straight to the source and use the Fox Now app and your Oculus Quest headset. Although not a true VR experience, you will be able to experience the live stream through your headset.

You will find that the VR experience might not that much different from the view from your television. There is some sense of immersion due to the closed-in world of the headset but it is not the courtside intensity of basketball. It is likely that the development of more interactive viewing is limited by a lack of demand. The practicality of seeing the action up so close is limited when you need to see the whole field to fully appreciate a play. This might be one area where the skill of a television director is needed for a fulfilling viewing experience.

Even though the viewing experience might be limited, the use of VR to play and train for American football is well developed. Take the case study of the partnership between Trick 3D and Profile Studios, Proof Inc and more. Using millions of sensors, the developers animated 22 college football plays while they played in real-time.

The results is a VR game that allows users to become a quarterback leading a team in the final play. With the use of motion-capture and real-time game engine tech, they can now offer an opportunity for fans to jump directly into the action.

In recent times the Minnesota Vikings announced they were using VR in their quarterback training. It allows the players to experience the onrush of players, the need for rapid decision making without the chance of injury when the big hit comes in. It is not surprising that the Vikings looked for a way to protect their players. They have had yearly woes with quarterback injuries that have completely halted any chance of progress.

There is also the option of investing in a 360-degree camera and audio tech that allows you to record and then review a play as it happens. You can through the immersive experience step-by-step, understanding what when right and what could be improved. Strivr Labs have developed the Viking training system, believing it will revolutionise the way teams train.

Though the Vikings seem to be leading the way, they are not the only team looking to build VR into training. The New York Jets turned to VR to help turn around some dire form. Equally, the Dallas Cowboys, San Francisco 49ers and Arizona Cardinals have all turned to virtual technology. It is not just the chance to mimic live game experiences, but the data that can come from using such apps. It is easy to diagnose and correct issues in the game of the player thanks to the analytics provided by the training app.

Belch of Strivr Lab believes that the VR development will help put the user into the action, the exact position as their favourite athlete. They can be part of the game or take part in a practice drill. The development of the training techniques will give sofa-based players the hope of getting closer to the action and knowing what it really takes to succeed in the NFL.

NFL, VR and the future

Although the current state of NFL and VR as a live viewing experience is limited, there is hope that this can change. The NFL understands it has to move with the time and offer live-action through multiple data streams. Intel is looking to find a way of bringing the close action to reality. They are working with the NFL to make sure an immersive experience will be possible soon.

William Deng of the NFL was convinced of the need for more development when he instinctively dodged out the way of a receiver running into the end zone even though he was seeing it through a headset. Right now this level of viewing interaction is likely to be limited to postgame highlights – but it is better than live streaming of traditional broadcasts into your VR headset.