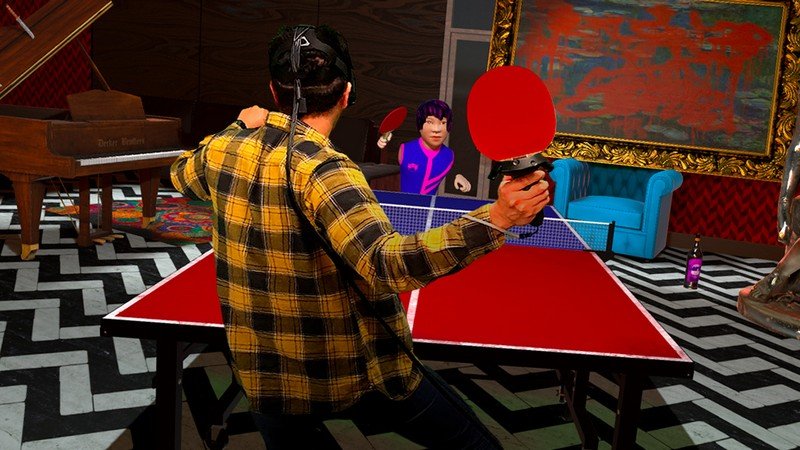 Released Jun 2017 3.7★
Experience ping-pong and tennis with realism only possible on the Vive. Play with friends, jump into a quick game online, or tackle career mode versus a spectrum of opponents in far ranging venues. Challenge your skills with realistic physics, or play in Fun Mode to get a boost in accuracy while you learn.

ABOUT THIS GAME
Brought to you by Vive Studios and Free Range Games, Virtual Sports draws a new line in the sand for realistic simulation and VR fun…except you never need to chase the balls!
Easy pick-up-and-play controls for ping-pong and tennis
Compete against bots designed to teach consistency, power, spins, and speed
Compete against other players in Amateur, Master, and Champion Leagues
Network multiplayer: Quick Matchmaking or Find Steam Friends
Voice Chat (VOIP) supported
8 immersive environments
Fun Mode – special controls to help keep the ball in play
The coolest canine umpire ever

With Virtual Sports, our team at Free Range Games worked hard to achieve two main goals: provide an amazingly fun and familiar experience for those who already know how to play, while also providing beginners with an excellent way to learn that’s even easier than real life! The groundbreaking physics of Virtual Sports transfers the energy from the player to the angular momentum and force on the ball with a precision to match the Vive’s sub-millimeter controller input. Combined with the Vive’s haptics and great audio, the illusion is stunning. For new players, we can adjust the ball response such that it still feels real, and the laws of physics are still observed, but the ball stays in play much more often. Even master players find Fun Mode enjoyable, with its longer, almost meditative rallies.

Free Range Games has a mission to bring great gameplay to multiplayer VR. Using networking techniques perfected for competitive action video games, the latency when playing Virtual Sports online is hidden from the player in such a way that both players will see the ball hit at the same time even if they are playing from far apart. 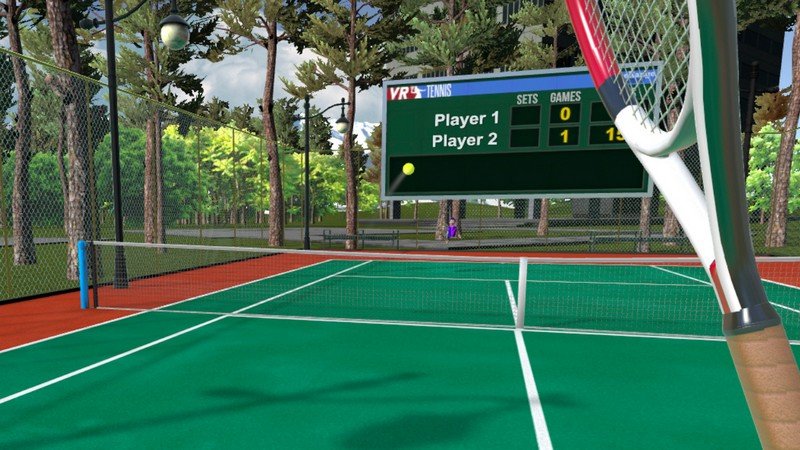 Craig
Dec 18, 2018
★★★★★
this games feels absolutely amazing. Specifically in ping pong, because I think that’s where this game really shines. The hitting of the ping pong feels really natural, and the one thing I was NOT expecting at all was the hyper realistic ball/ping pong movement and it’s physics. I accidentally found out when I went to get a last second hit when I was caught off guard, and the ball curved really hard, and that’s when this game got me hooked. I could catch my opponent off guard by curving a shot into their back hand, or float the ball just over the net so they have to hurry up to get to the ball. Tennis is pretty good, but it’s a little bit more punishing depending on how you hit it and the angle you hit the tennis ball at, still a great experience. I suggest you buy this right away. Although the online gameplay is very lacking, as I wasn’t able to find a match, but I will keep trying 🙂

Mike
Feb 21, 2018
★★★★★
Table tennis is amazing, so difficult and so satisfying. I’ve played Eleven table tennis too, and I much prefer this over it.

Jesse
Dec 02, 2017
★★★★★
The game mechanics are quite impressive. It’s a bit forgiving in some areas but the overall feel of putting spin on the ball is pretty amazing. 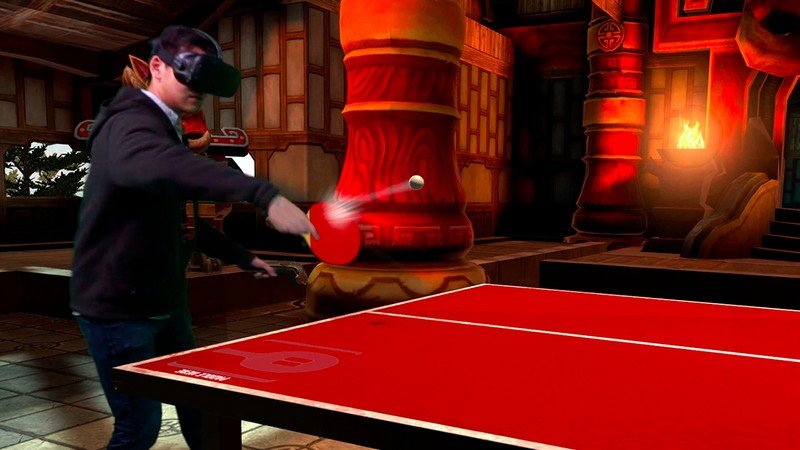 Bill熊
Jul 10, 2017
★★★★★
Best ping pong I’ve played in VR. So real and fun. We want to buy two copies for multiplayer after trying this for free on Viveport subscription. (We both won Ping Pong tournaments in real life when we were younger).
The tennis part is not so good. Auto-teleportation. And the tennis ball flies to unrealistic directions.

Problematic
Jun 07, 2017
★★★★★
Amazingly realistic ping pong! Not a huge fan of the tennis teleportation movement though

Badger
Feb 09, 2020
★★★★★
jaw dropping realism with the ping pong physics/feel. diverse AI to play against as well. cant wait for multiplayer to come out eventually. Tennis physics are good too but doesnt play well. only wish you could move the table in your playspace/re center- as the better the AI get you need to move differently. very impressive game if you like to play ping pong IRL you NEED this.

Stephane
Jan 13, 2020
★★★★★
For the Ping Pong, (btw. I use a Valve Index to play) and this feels like the real thing.The ball sometime over react, but not that much. The fact that the upper body of opponent is present helps for immersion/realism. But I can do the same service as in real world (disable assistance off course), this game really is a gift. (+ in VR you don’t have to run after balls… 😉

For Tennis, I had never played in real life, so I can’t tell but it’s more challenging, and saw nothing but the fact that it places you where you should be to hit back the ball on the court, but at the same time, it would be too hard if you had to move yourself (not impossible though, but hello the motion sickness!)

My best sport game, they pay attention to physics a lot to my opinion. It’s a shame that there is some people that have problem with control, racket position etc. I hope they fixe that soon for you guys

Finding
Apr 29, 2019
★★★★★
Really good table tennis game! Great physics and immersion that mimicks real life very well. Multiplayer leaves a bit to be desired. Ive had the game for over 8 months and have only been able to connect to a multiplayer game twice. Not sure if its lack of community or the game. It goes thru connecting then seems to fail. The AI is good to practice with with increasing difficulty. I found the game to be very well done and fun! Highly recommended!

Mark
Jan 24, 2019
★★★★
Updating my original review from 1 star to 4. Very good ping pong – one of the best. Tennis is okay, but racket holding/placement seems to be off a bit, especially on corner shots. Overall definitely worth it.

Annenouk
Dec 02, 2018
★★★★
Very nice, enjoyable game. It feels very realistic. I liked it so much I had to buy it instead of only renting it. It’s not a masterpiece but you will sure have a lot of fun with it. Works perfect with WMR.

Alfredo
Aug 24, 2017
★★★★
Worked well for the most part, had a long load screen that happened randomly but I may have accidentally pressed something. After a restart I didn’t have any issues. The Tennis and Table Tennis are pretty good, feels very fluid and the AI reacts well to your hits. They aren’t too difficult but don’t go easy on you either, the perfect balance. Tried to join a multiplayer game and I’m pretty sure it didn’t work because no one’s playing. The one time it did try to connect it failed so be weary if you and a friend are trying to play this together. Overall though it was fun so I’d recommend it. 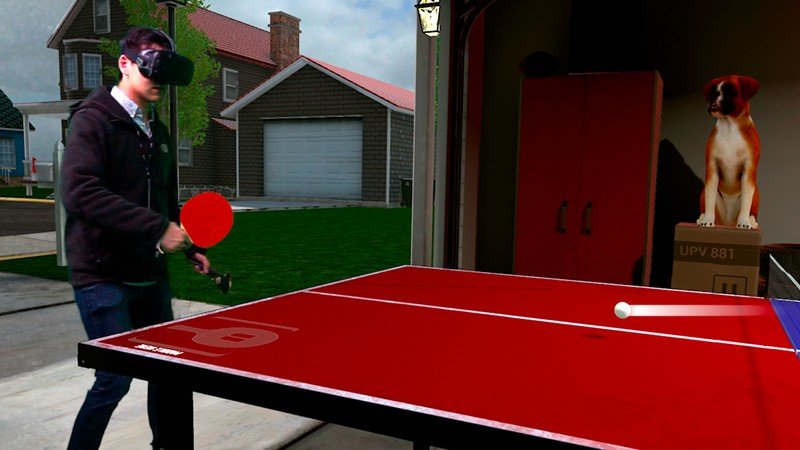 Zachary
Feb 05, 2020
★★★★
Ping pong is incredibly fun and responsive! Tennis side is disorienting and difficult to get a handle on. Even after messing around with settings and controls, I just could not get a handle on it. Worth checking out if you are interested. Offer multiple language options!

shiltin
Nov 21, 2018
★★★
During ping pong, the settings menu constantly pops up on Rift, sometimes 10 times per serve. Good physics and graphics on the games, shame about the menu issue.

Lemow
Sep 14, 2017
★★★
Pretty much what you expected from the title.
Would be better if there are more modes in it like arcade and such.

ZoRRiLiKaS
Jan 26, 2019
★★
just for fun! i dont like the graphic.Tennis its ok have fun but ping pong its poor!

Jason
Jun 06, 2019
★★
Looked like it might be fun but couldn’t adjust the placement of the paddle and the tennis racket was like 3 feet away from my ‘hand’. Hope this can be fixed or maybe I missed a setting somewhere to adjust stuffs with.

_TheCursedOne_
Apr 14, 2019
★★
probably fun if u play it with a friend, but it’s to basic. nothing special, not accurate, there are better tennis-like games.
What I do like is the worlds where u are playing at

William
Mar 28, 2019
★★
This game is absolutly terrible I cannot recommend it in its current state. The Tennis is so far from realistic and the same goes for ping pong (table tennis) You would be better off buying 11 table tennis

bas
May 07, 2019
★
Table TYennis was pretty good once you got used to the odd bat position. Others can obviously play tennis but why is my racquet 1m away from the controller? Makes the game completely useles

Andrew
Sep 21, 2019
★
Game has unresolved bugs that were brought up years ago. Wireless dongle somehow makes paddle not map correctly to controller, and the setting does not show that allows adjusing the way you grip the paddle. This makes both tennis and table tenis games completly unplayable.

In Pingpong you see the controllers, but the pingpong paddle is attached PERPENDICULAR to the handle of the controller. Also with the left hand controller you can just drop a ball, not throw it up, like you would do in real pingpong.

Tennis is not any closer to the real thing. The racket is about 3 meters away from your hand. Good luck aiming! also the left hand just drops a ball to the ground. Try making a smashing serve that way!

Andre
Mar 18, 2019
★
I would love to enjoy this game but it simply DOES NOT WORK WITH THE VIVE WIRELESS ADAPTOR.

I have tried for almost three months to get a response from Free Range Games or Vive Studios and neither of them seems to be interested in fixing this so it remains unplayable.

The table tennis racket is not oriented correctly and the option to change the grip is not in the menu when using the wireless adaptor. Wired works fine but wireless does not.

The tennis racket is high above your head and not usable to play. Again, wired is fine but wireless is not.