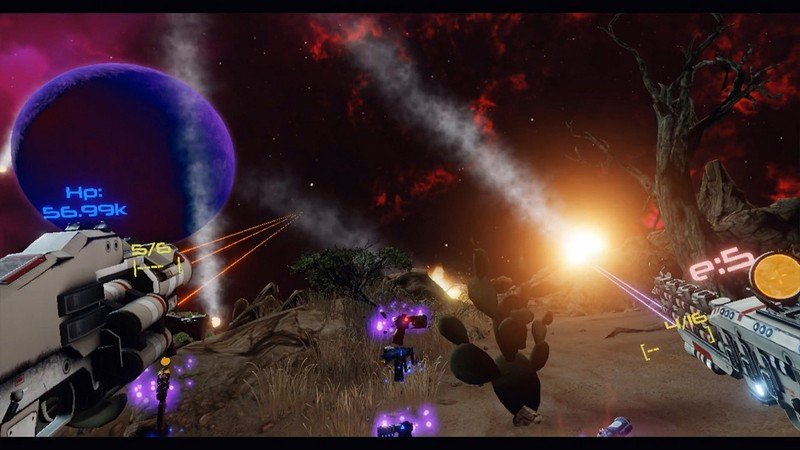 Released May 2017 2.4★
Quotes from reviews
■”If you wondered what Space Pirate Trainer was training you for, it’s Void Rangers.”, Cliff
■”Well that was unexpectedly fun.”, Shadow
■”If you are looking for a shooting game similar to Space Pirates, gun drops like Borderlands, and the ability to go different worlds and levels with never a dull moment to be had, well then this game is for you.”, John Gulbany
■”Cool Diablo-like loot with upgrades: check”, Frorath
■”Void Rangers is very similar to Space Pirate Trainer, with some neat additional features.”, CryMor Gaming

It brings fresh air to the genre with:
■Travel around the galaxy
■Randomly generated loot
■Enemies with different artificial intelligence
■Weapon and armor upgrades
■Leaderboard for each level
■Hard boss battles

Void Ranges are our defenders.
They stand on the edge of our universe.
They fight against the darkness.
Whatever evil comes from there, they send it back to the void!
Can you become the best Void Ranger and save our galaxy?

Kythos
Mar 09, 2020
★★★★
Other than the language settings being non-intuitive (you need to work through the various areas to get to the language settings, set the language to what you want, then do a mission before it actually switches) The game is actually really fun, there are a good variety of types of weapons with borderlands like weapon generation to both create weapons with special bonuses, and upgrade your favorites. The point and shoot elements are done very well, and you will face some diverse enemy types.

Long story short, if they fix the language selection to the beginning, before game-play starts, this game would be intuitive, and a tonne of fun. As it is, it is still incredibly fun, you just need to get passed that first hurdle.

Efrain
Jan 13, 2019
★★
Graphics look good but could not figure out how to play. It was not in English. It displayed a wall that you could chose English from but not everything was in English. Had no idea what i was doing

Sean
May 19, 2019
★★
Can confirm that there isnt really a sense of progression, or how to? Is there a way to set the instructions in the game to English?