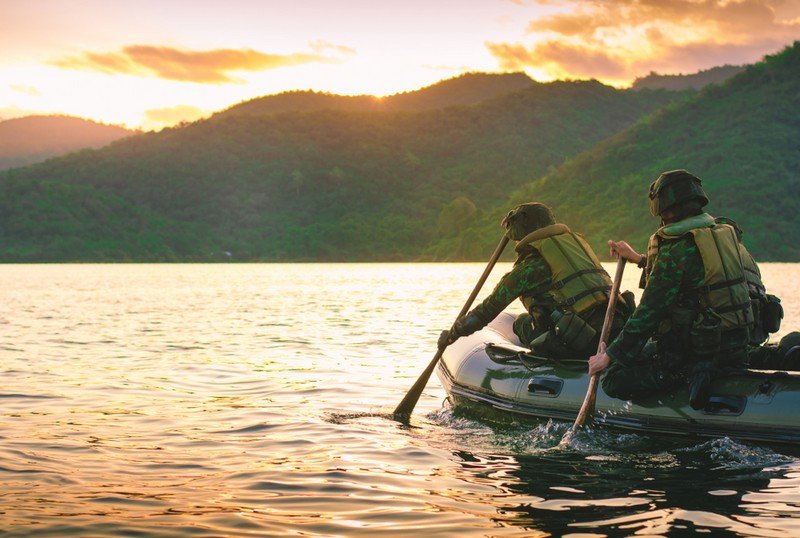 This is a stealth action game that has been designed with virtual reality technology in mind. It feels like we have moved beyond the time when developers are creating cross-platform concepts, believing that a standard platform game can easily transfer into the VR Headset. Now, developers understand that the gamer needs something more to justify the added tech and the heat and nausea. So, it is always refreshing when a developer with a less than stellar history in game production suddenly comes up with something that moves the gaming world forward.
When you are paddling, you genuinely feel like you have a paddle in hand you are pushing yourself stealthily through the landscape in your tactical kayak. Whether a whole game based on water is going to keep us interested is still up for discussion, as we still explore this game. However, so far, so good. Every time we come back to play as part of the Phanton Covert Ops team we are more convinced that the developers have done something special with this game. 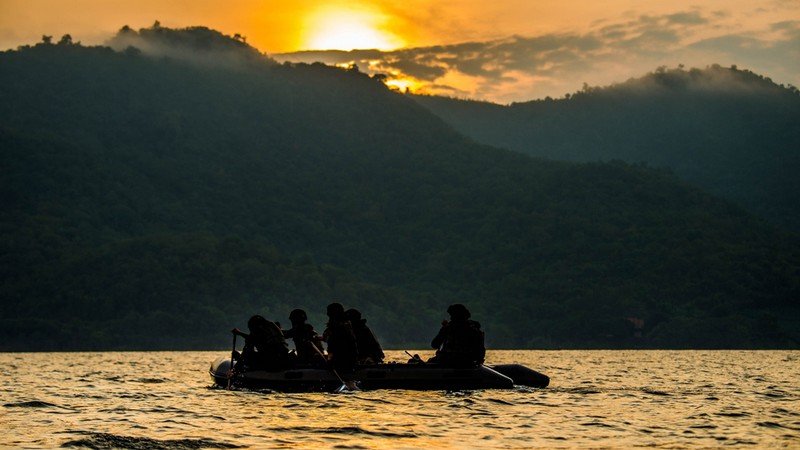 So, what is a tactical kayak? Well, it is like that kayak you played in as a kid, except this one has some pretty snazzy gadgets and a few deadly guns included. You will be glad to know it is also painted in camouflage colours – those bright orange boats of your youth might not quite fit the stealth brief. The gameplay is consistently in this kayak, as you move through spillways and attempt to distract guards while hitting the key objectives – which usually means blowing something up. Don’t get your hopes up with the story – there is an evil villain looking to do evil things and you are the good guy coming to put to a stop to his evil ways. It is sort of circa every military/ spy/ mission-based game you have ever played.

The gameplay follows a linear path through a story. You have no choice but to keep following the route mapped in the game – and sometimes your path will be blocked by guards. When you are blocked, you have to find a way to stealthily move on with your task. Shooting is always a last resort in this game, as you are pretty exposed in a kayak and the gun will most certainly draw attention to your position. Therefore, you need to find yourself hidden under docks or in reed beds while dodging the light from the guards.

You are kitted out with night vision goggles, which is pretty cool. They can help you mark and guards and spot interactive objects in the area. However, the range of objects is pretty limited – so again – don’t get too excited. You can explode barrels, for instance, or switch a light on or off – yeah – told you not to get excited. However, if you do spot these items they are like a flashing light on how you are meant to solve the puzzle of getting around the guards. So, if stuck, check out the interactive objects and put the pieces together.

So, what starts out promising might become a little formulaic we fear as we go along. Although we haven’t plateaued with this game just yet, we sense it won’t be long. We are already being pretty lazy about avoiding all need to strategise by taking out the guards with the silenced pistol. The introduction of security camera makes it a little more challenging though – and the mines that have started cropping up have caught us out more than once. If you are a seasoned gamer, you might want to ramp the difficulty up to its highest setting from the start if you want to stay interested.

Phantom: Covert Ops uses sandbox gameplay but without any sense that you have reason to go explore. There is a definite path through the game, therefore, there is no dynamism to this open world. The scenarios are based around the simple principle of stealth, so we will be interested if the developers can continue this basic premise over the course of several hours of gameplay. We have heard that it takes only 4 hours to complete the missions in full in the campaign mode – this is nowhere enough to keep hardcore gamers happy.
There is a free play mode and there are challenges. This adds some variety to the game. In free play, you are scored based on how stealthy you can be – and you lose ground if you are spotted. You can unlock equipment in free play that will help you through the campaign – so this is a clever motivation to improve your skills. You can also use Free Play to unlock some cheats that make the campaign mode more interest too – as well as unlock the 14 challenges available in the game.
We like mini-games. They grade you based on time and score and entice you to keep coming back time and again. We really like the one where you raced through gates in your kaya while shooting at guards. It was a nice bit of adrenalin-junki-ness in the midst of all the stealth!

Despite our caution and our expectation that nDreams will disappoint once again, we are really enjoying this game. It is ultimately immersive and does something unique in the VR world. The use of the kayak is more than just a gimmick and adds a layer of interest and complexity to the game. The developers have included some thoughtful additions that will appeal to newbies and old-hats all at the same time. We can’t wait to dip our toes in the pools of stealth once again!