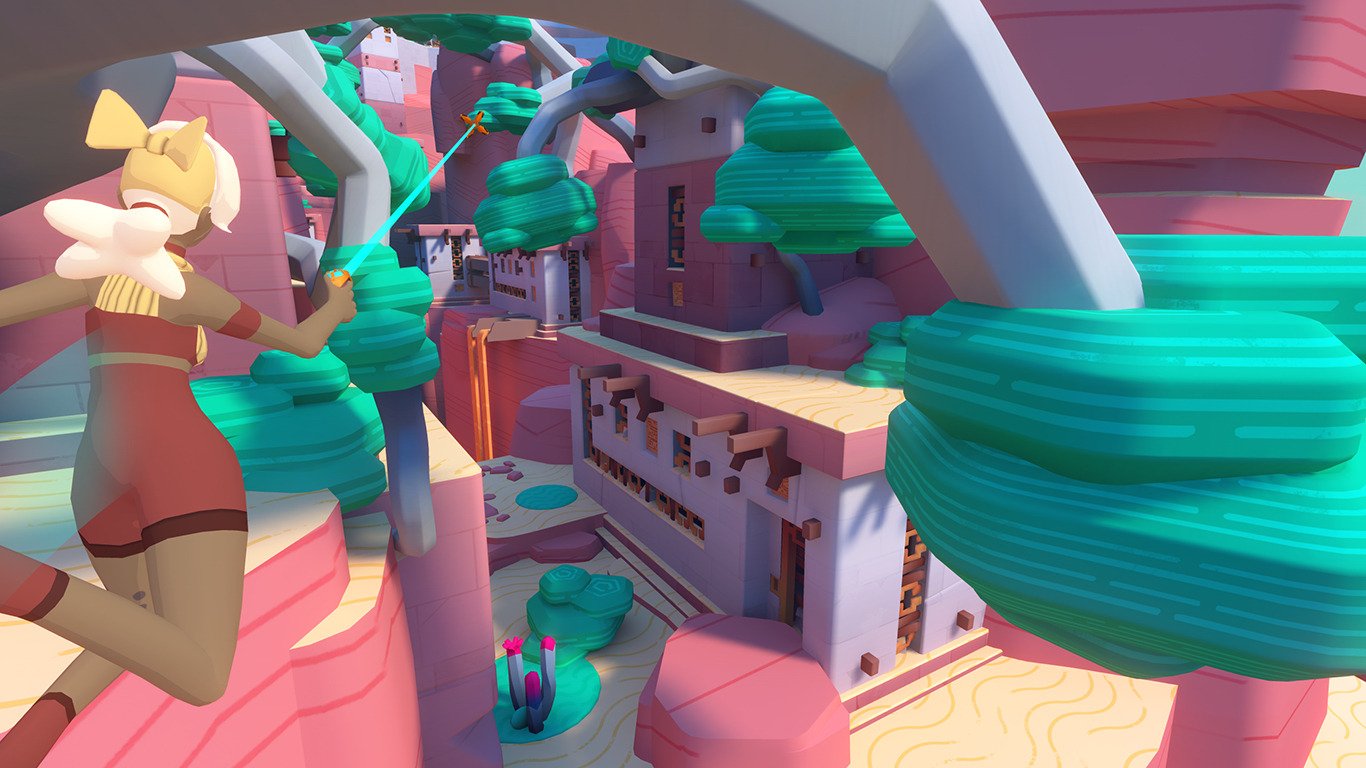 Released Dec 2018 4.0★
Return to the world of Windlands, alone or with friends. Armed with grappling hooks and a bow, soar through the ruins of a fallen world. Embark on a journey to destroy the gigantic titans and save the world from an ancient danger.
(also playable on Oculus Rift) 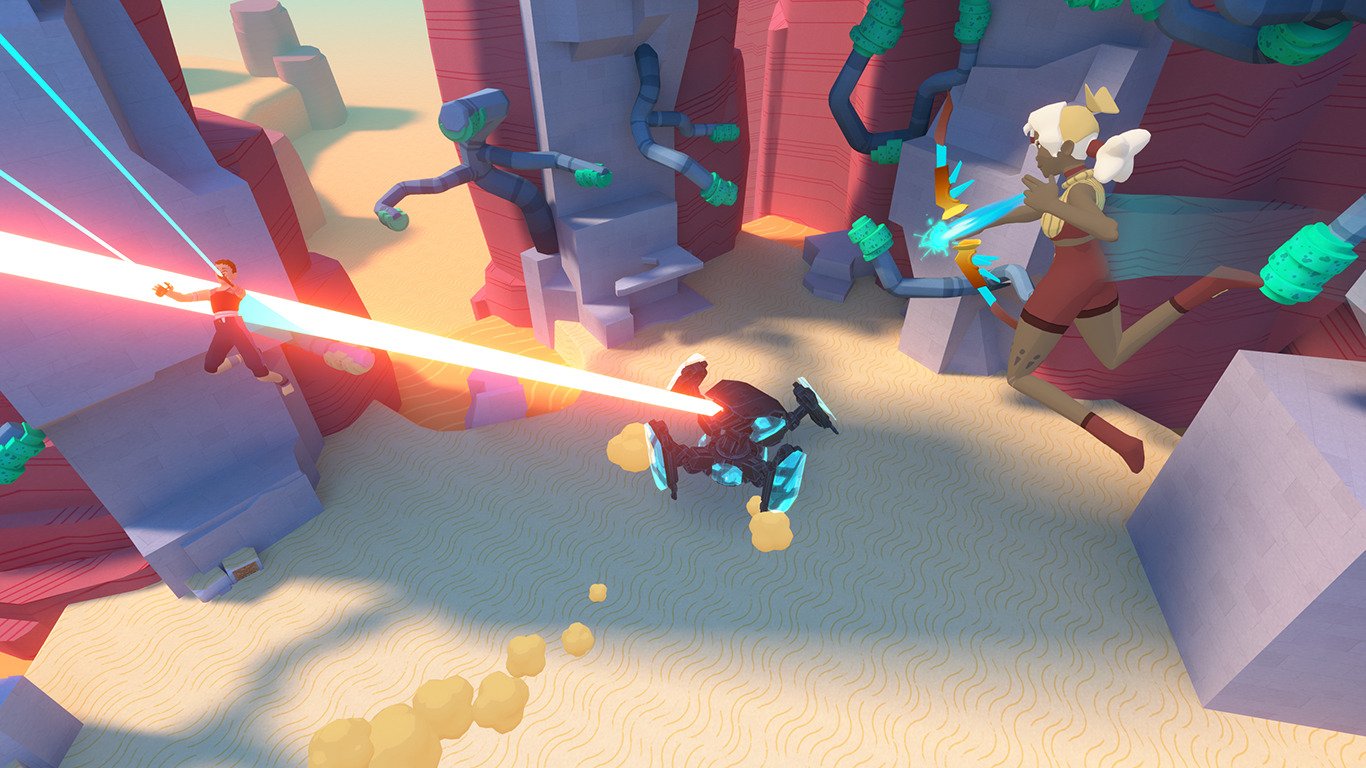 Jay
Jul 04, 2019
★★★★★
By far one of my favorite games. I got stuck in quite a few places as I am very new to VR and was barely getting used to the main controls. Definitely going to try and play more to see how far I can get. The swinging around really feels weird at first, and I don’t usually get any motion sickness. I had to take a few breaks during the first few times I played.

edit : 7.3.19 – I just upgraded my desktop from this first post 5 months ago and I love this game even more. Such fun gameplay.

Sarah
Jul 06, 2019
★★★★★
Fun with friends. Can be frustrating at first to learn the controls and is very difficult if lagging. Funny to see someone in the distance spamming their claw as they fall into the darkness. 10/10 would watch friend die again.

Juraj
Mar 19, 2020
★★★★★
Oh man! This was agazing experience, just like the first Windlands.
The bow fights in the air are trully mindblowing. I’m looking forward plaing this again on harder difficulty.

Few things I would change:
– bow could be locked to a single hand, it’s not like people will switch hand in the air. This would help accidentally spawning bow in a wrong hand.
– some parts are really really hard. Maybe “Easy” difficulty could have some bonus green parts 🙂
– the mid-air shooting is really really REALLY AMAZING, I wish there were more of that (with enough green stuff in the air to grab on)

Anyway, I’m looking forward to Windlands 3! I hope it’s on the way!

Justin
Sep 28, 2019
★★★★★
Swinging to get enough momentum so you shoot an arrow or two before having to recover and reposition yourself…When it all comes together it’s an incredibly satisfying feeling. 🙂

Nicholas
Jul 18, 2019
★★★★★
A bit of a learning curve, but so much fun. Just the experience of zipping through the air while shooting robots is a blast.

Highly reccomended once you get your VR legs. Not for novice VR players.

Mohammad
Apr 02, 2019
★★★★★
One of the best games available on this platform! From smooth gameplay to beautiful game design, it is excellent!

Andrew
Jan 19, 2019
★★★★
a lot of swinging, game seems geared towards multiplayer, without people online this makes fighting the enemies pretty challenging. the swinging doesnt give much motion sickness if yo get a good frame rate, the games graphics scale well for lower end pc’s. 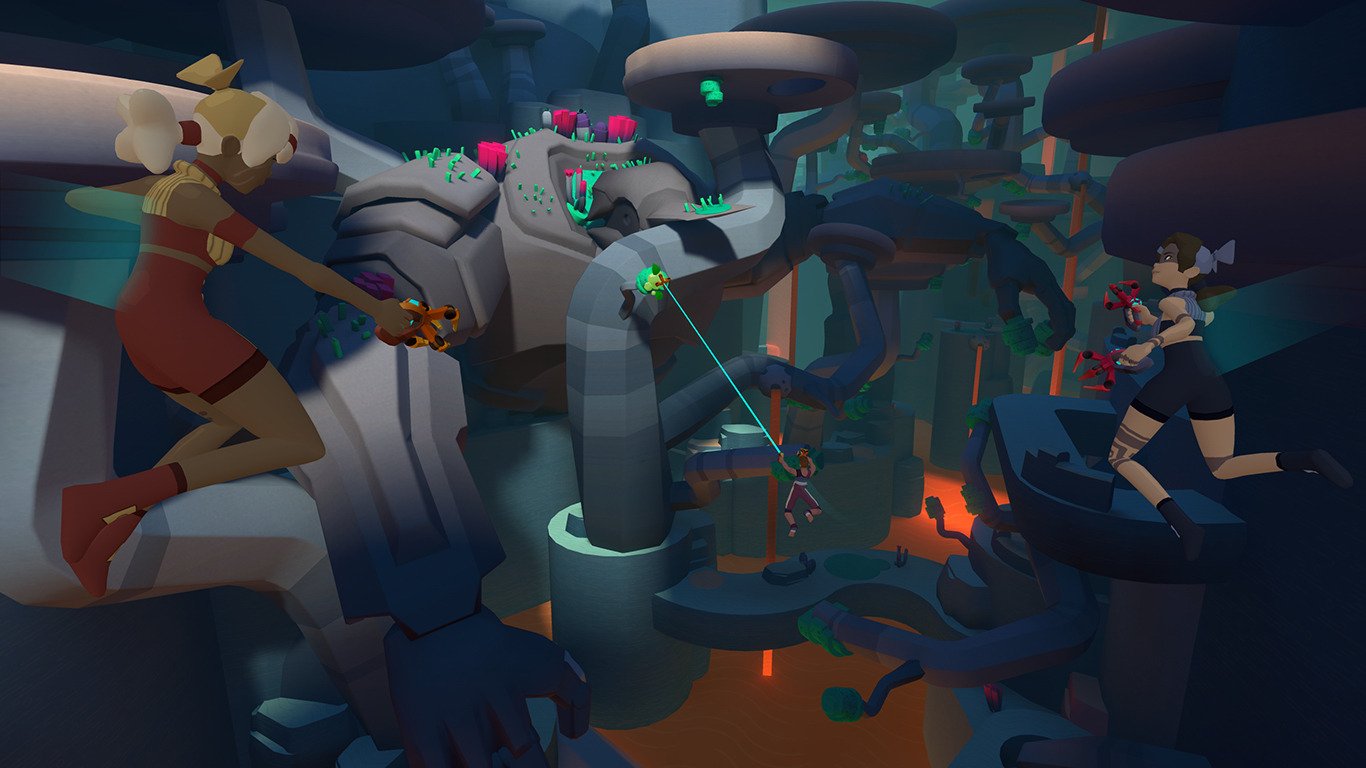 Irwan
Jan 14, 2019
★★★★
Neat experience, but didn’t quite enjoy the last parts of the adventure as the path becomes harder and harder. I also got stuck for a long time when gathering some machine parts, since I couldn’t find them. I enjoyed the battle with the bosses, it’s kinda neat.

Chris
Jan 05, 2019
★★★★
My first experience with a game of this type and it was fun. If they beefed up the graphics and made it a Spiderman theme, the thing would sell like hotcakes. I got a little motion sick swinging around and the bow mechanics on the grips were a chore. I am not sure how long it is. I managed the first stage though. This says it is multiplayer but I did not see any way to engage another player.

Mark
Apr 12, 2019
★★★★
Great locomotion mechanic, but it could really use the periphery speed lines like Sprint Vector has. Boss fights are quite tedious, swinging and shooting the bow together is fun though. I would like some puzzles!

Octu
Aug 19, 2019
★★★
My main problem with this game is its repetition. It feels like it’s padding for time. It makes you walk back through levels you’ve already finished (linear levels, mind you), Bosses have a time-out between phases where they’re invincible and you have to do ever more boring and obstructive tasks to continue the awesome boss fight. The pacing is a wreck.

I got about an hour and a half in and there wasn’t a single variation on the core gameplay., nothing changed, no moving platforms, no dissolving grass, no increased difficulty to the core swinging. The enemies were brain dead and served as little more than mandatory targets.

I didn’t get particularly far, but that’s because after about 15 minutes of climbing up to the peak of a mountain, the game saw fit to just turn the objective marker around and tell me to go back. It was the 5th time it pulled that nonsense and I made it the last.

Quinn
Dec 25, 2018
★★★
the game was very fun and i completed it however as soon as i did i was never able to play the game again. when i hit play solo it does nothing.

Philipp
May 25, 2019
★★★
It is not a bad game. I like the graphics and art style, also the story telling. Certainly one of the better games here.

However with all the looking up it gives me neck pain. It does not feel like there is always a way to continue, so rather trial and error than exploring gameplay. Not sure if it is intentional or roughly tested. I am not sure, whether I’ll continue…

Sloppy
Dec 14, 2018
★★
A lot of going back and forth between the same areas and doing a lot of the same repetitive tasks.
The main mechanic of the game, the hooks, are more frustrating than they are fun. I found myself constantly annoyed with how short the hook distance is, which absolutely doesn’t help with how easy it is to end up stuck somewhere with plenty of leaves in sight but none of which are within your range.
I had kept going in hopes that it would improve at some point, but by the time I had gone through the first portal to the desert area and finished the hookless parkour, the combination of frustration and boredom made me ask myself “I am not having fun, why am I still playing this?” immediately before quitting.
If you are looking for a good game to swing around like spiderman, a game that does it a lot better is Jet Island on steam.
This game isn’t worth paying for, free with subscription; fine.

Vicente
Feb 19, 2019
★
Game is great… until it breaks. I reached a level right after *spoiler* the bad guy arm appears through a portal and you have to follow. That level is really annoying, everything is lava so you die over and over, and the waypoint is really high and difficult to reach, i wandered around, got tired of getting nowhere, so shut down the game. Next day the waypoint has dissapeared, no matter where I look I don’t know where to go, so game is broken. There no way to restart the level, tried to reinstall but did nothing.

So game is broken for me, avoid until fixed.

Alex
Apr 21, 2019
★
Terrible game, graphics and mechanics. Not sure why we are visiting games similar to the ones I played in late 80’s and early 90’s, only in VR, but that doesn’t make them enjoyable. I’d rather play the currenbt gen desktop games than play such pesky VR games.

Damian
Jul 03, 2019
★
Nah. Couldn’t get into it. Took about 8 goes to jump. Dunno if it’s my controllers but it all just seemed quite basic and boring.