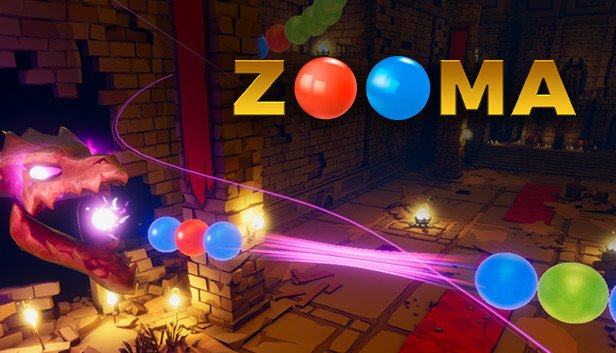 Zooma has been a PC game since the beginning of time – or so it seems. Remember the concept of being in an ancient temple with all those symbols and the increasing tension as the balls get closer to the floor. You have to shoot your ball – whatever colour you are presented with – to create a combination that shoots the balls back up to the ceiling.

In virtual reality, you are asked a more pressing question – can you make your way through the puzzles and solve the riddles in order to save the world. You can win the day with some good instincts and quick-fire reactions – however, it is genuinely only with clear tactical planning that you can master the more highest difficulty levels.

We used to love spending the odd half an hour on the tablet or phone and burst some ball combos and moving through the levels. Even on the PC during a coffee break at work, Zooma was a great way to meander through your spare time. Now, we are not so sure that this is the greatest preamble to a review on a game for virtual reality. Let’s explore the point of releasing Zooma VR. 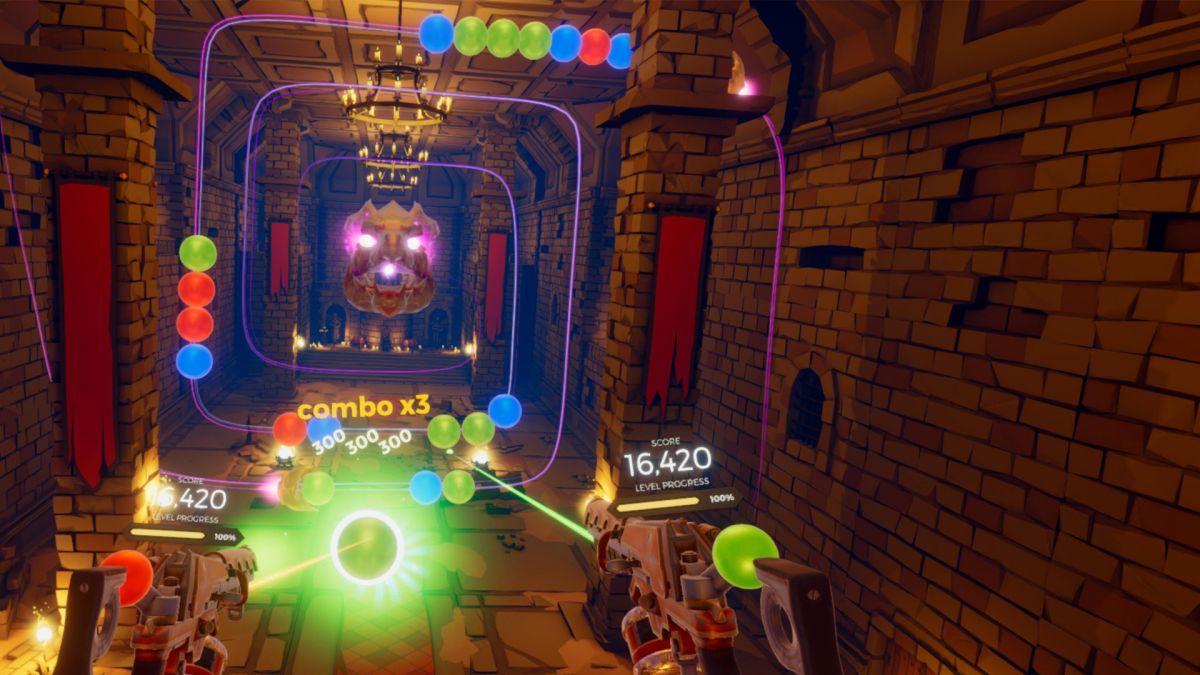 On Steam, 12 users playing Early Access gave the game 100% positive reviews. Let’s start there before cynicism completely overtakes us. There seems to be a point to this game being in virtual reality because it challenges your coordination and your decision-making skills in a three-dimensional immersive setting.

As before, this is a match-three game. You are given a set colour ball in your hand and you fire it up into the chain of balls and if there are three balls in a row the balls disappear. The balls are then further away from hitting the floor. If you are clever, you can force a combo of ball explosions by spotting where colours would roll back onto each other and cause more match-three moments.

When you step into the game you choose your difficulty level and begin to shoot at the rolling balls to match the colours. You need to keep those balls from disappearing into the mouth of the snapdragon at the bottom of the screen. If one ball gets there then the rest follow and the level is lost. You have to plan your actions – and this is one of the most essential reasons why this is a game worth playing. Without this need for rapid decision-making, this would be a bog-standard first-person shooter that just needs speed and accuracy. You cannot fire quickly enough to clear the level without making combos and this means thinking ahead.

First, let’s celebrate the fact that the game is comfortable to play in virtual reality. Being fixed in place with no locomotion means the horizon is fixed and you do not feel sick. Also, without the need for hectic movement, you do not get over hot even though you need to think and press speedily.

You might think that this takes away all the reason for being in virtual reality – however – we are oddly going to disagree for once. We are all for those games that take the functionality of virtual reality and seek to drive it forward. The idea of fully immersive experience is highly appealing and we are all for those games that take us to another world. However, there are more ways to deliver an experience and here Zooma VR has used the three-dimensions of VR to challenge the user and make this puzzle game visually more appealing. It also makes the need for shooting accuracy and skill more critical than in the old-style mobile game.

The one technical detail that really heightens the experience is the ability to shoot from both hands. If you played the mobile game you will know that you catapulted a ball from the bottom into the stream of balls. Here you can fire using a beam coming from each hand. The colour of this beam indicates the colour ball that will be fired. This choice means you can use tactics more, as you plan out shots two or three in advance. You also need to master accuracy from both hands.

We love the way each hand gets its own score, so you can compete against yourself for accuracy with each hand too. This sounds like we are stretching ourselves for positives – however, we genuinely enjoyed this small detail.

The game can be played without a VR headset and it is still enjoyable. It does become more immersive with the headset on and you lose the sense of the outside world. We feel this is a best review we could give a classic match-three puzzler just released into virtual reality.

While the Early Access game could be completed under an hour, yet this was an enjoyable hour and we lost our sense of time while we were playing. It is not that the game has to do anything else to increase the length of time – there just need to be new levels to continue the gameplay.

Warning: this game is addictive. Like any match games, you find yourself lost in the task. It is nice to get lost in the task and not get engrossed in narrative or feeling too emotionally challenged by the busy-ness of other VR games. The success of this game is not its depth or cleverness, is that it allows you this moment away from the world where you are focused entirely on your senses. You will go in and want to give it a go and find you have suddenly completed all the levels and are looking for your next challenge.