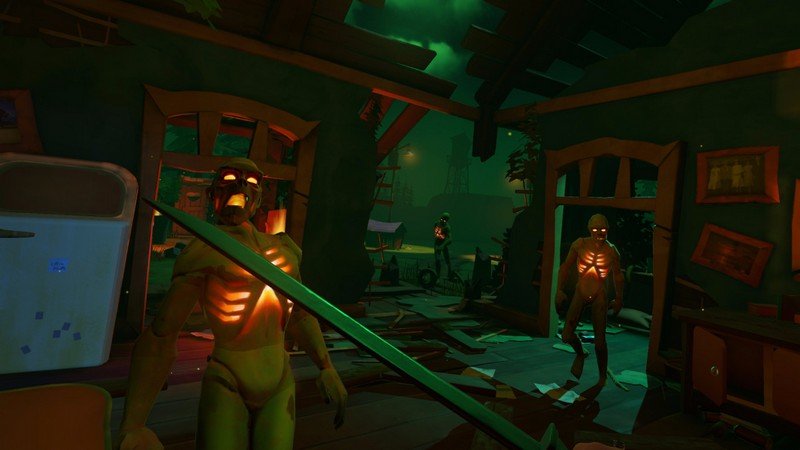 Released Sep 2017 3.9★
ZR : Zombie Riot has been built from the ground up for Virtual Reality, offering motion-control focused gameplay powered by the HTC Vive. Players use their hands to pick up anything they see and use it as a weapon!

ZR is an action packed horror survival game where you must use your wits and surroundings to survive the apocalypse! Purchase a huge array of weapons, from Dual Pistols to a Tesla Assault Rifle! All in your own home, survive the end of the world in this visually stunning VR experience!

Need a little bit of range to pick off the stragglers? Pick up your Sniper rifle and pick them off one by one via your scope! Need something sharp to handle those zombies that get a little too up close and personal? Pick up the Spikey Baseball Bat ! You have the freedom to handle the undead your way! Take them out in style; Tennis rackets, chainsaws & grenades for more explosions!
(also playable on Oculus Rift) 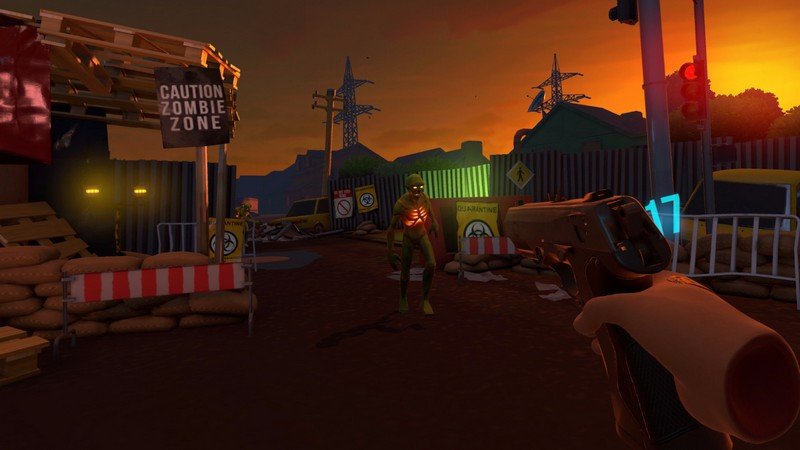 JabberJon
Dec 29, 2018
★★★★★
An enjoyable experience all the way through. The controls are tight, the visuals are goofy but cohesive and the game is overall just fun. A few different zombie types, several weapon types all in a light-hearted package. Worth a buy (especially at the current sale price!!)

David
Sep 14, 2017
★★★★★
Story mode starts off easy and starts to add difficulty with new weapons (and there are tons) lots of fun in the endless mode, exactly what VR was made for… I now know that I need to work on my left hand pistol shooting 😀 amazing game!!! S+

PsychicParrot
Oct 19, 2018
★★★★★
This game is available for a RIDICULOUS low price. For that reason, I wasn’t expecting it to be anywhere near this good. Seriously, it’s a really fun zombie shooter game with a cool story mode and you should have it in your VR library to play now! To the developers, I think you are underselling this game! Raise the price! Double it, at least! It’s well worth it.

The guns feel right and the sniper rifles are awesome fun to use (picking off zombies with a sniper is amazing!) .. I am having a great time with this game.

Brian
Dec 03, 2019
★★★★★
Well made. Design and look is nice, game play starts of pretty simple and easy, but progresses in difficulty pretty nicely.

Matthew
Jul 31, 2019
★★★★★
I’m playing this on the Oculas Rift S which is my first VR headset. I’ve played several games so far but this has been one of my favorites. It’s got a short story mode that you could beat in about 30-45 minutes if you didn’t have much trouble with the levels. There’s also an endless mode. I just had so much fun with the variety of weapons and how well they worked. You’ll have zombies coming from multiple directions in waves and it feels awesome when you can pull off getting headshots from different directions at the same time. If you like shooting zombies and fortnite style graphics I’m sure you’ll love this as much as me.

Richard
Jul 21, 2019
★★★★★
fun zombie game, A little short in story mode but use of weapons make up for it. The start of the game is real easy and gets you using both hands to shoot with. There are 2 handed weapons later on as the game get harder.
over all this is a fun game to play and can eat up a good hour or 2 in story mode. Zombies are not that scary so would be ok for some younger player. there are some heads that roll but no big splats of blood are anything and they disappear after a few seconds.

Michael
Jul 08, 2019
★★★★★
Holy crap what a great game. Sometimes the zombie will sneak up on you and scare the crap out of you. It’s made me drop my guns a few times! Ha ha ha. This game is straight up awesome. I can’t believe anyone wouldn’t love it. It’s like being in a zombie movie.

Werner
Apr 24, 2019
★★★★★
Tried it first with the vive subscription, thought it was fun for the kids. Well apparantly they didnt like shooting zombies.. To many oooohhh and aahhhs .. lol . I didn’t try it. Bought it later when it was dirt cheap (way to cheap if you ask me). Still one of my favourite shooters. easy on the eyes. Relaxed. and Fun.

As for the price. WoW… If they set the bar, then 80% of the games on vive should be under this price. It is way worth more than some titles here that are 20 euro’s plus. 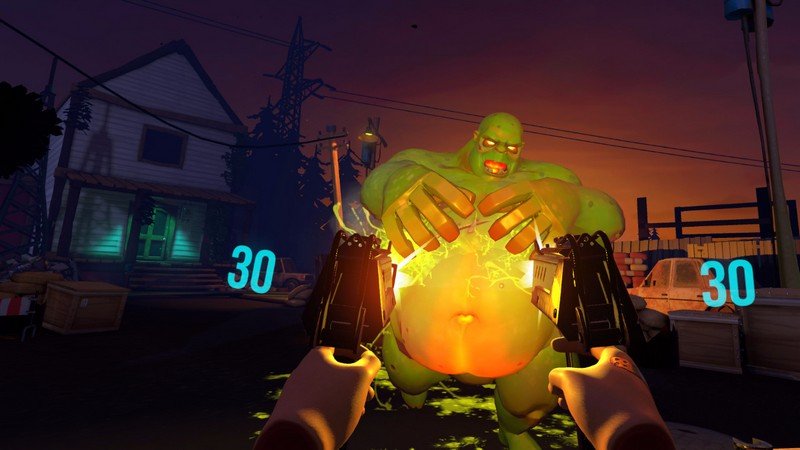 Kyle
Nov 22, 2018
★★★★
The story mode contains a handful of environments that the player stands stationary in and defends themselves or another target (food source, for instance) with whatever guns are provided at the beginning of each level. The guns get stronger as the zombies get progressively harder. You’re not missing much here.

The endless mode, though, is where the game really shines. You cycle through the same environments as the story mode, but you are able to decide which gun(s) to purchase throughout your run. The more powerful guns, obviously, cost more and the zombies get progressively harder. You get bonus money for headshots and multipliers for quick, consecutive headshots. Trying to decide between grabbing the gun you can afford or trying to survive to the next tier with the one magazine you have left is pretty exciting. Very happy with this purchase!

Greenlit
Jan 04, 2018
★★★★
If you’re looking for something fun, challenging, and jam-packed with zombies with the potential to make you laugh before scoring extra points for a trifecta of headshots, look no further than this lighthearted take on the arcade zombie wave shooter. Your neighbors will be glad you invited them over to play—just so long as you manage to do so before they get eaten!

Adam
Oct 25, 2017
★★★★
The game is fun and the shotgun is amazing but sometimes you will be put too far away from the center and cant get to your gear.

David
Jan 02, 2020
★★★★
Pretty simple zombie wave shooter with a variety of guns. Though it works with the Rift S, it showed the Vive controllers each time it force dropped the guns to load the next level. Though this game is over 2 years old, and has not been updated in quite some time, it’s still a fun game to play especially included with Infinity.

Royal
Aug 17, 2019
★★★★
Very fun at the start, but feels less polished later on. I felt like I got stuck because the gameplay wasn’t refined beyond the first couple levels.

at beginn are to less action and later are some lvl to kiding the player or like this!
Defending object lvl are usless!

sad exist no walking! just stay on a place are lame!

but over all is the Game fun!

Matthew
Apr 27, 2019
★★★★
The game plays alot like Time Crisis, but the story mode levels where you have to defend something 20 feet in front of you are annoying. The endless mode is very difficult.

_TheCursedOne_
Apr 14, 2019
★★★★
it’s fun for not experienced players. it’s beautiful, u can play it for a long time cause u don’t have to run around. if u r looking for a fun game to cool down a bit, this is the one u need. had a lot of fun and i’m sure i’m going to play this game once in a while. almost gave 5 stars.

Melanie
Apr 03, 2019
★★★★
This was fun! I normally don’t like shooter games because it is difficult for me to access a menu to choose weapons, but this game didn’t require it. It was simple and easy to load my weapon and shoot. Good story line, fun graphics, and easy start off, and slowly gets much more difficult. Nice job on this game!

John
Dec 12, 2018
★★★
So much about this game is just pure fun but for the price tag it only deserves three stars at most. The length of VR games is already a big downfall and not great but this is pushing it… I was able to finish the story mode in just under an hour and a half. This is absolutely not acceptable. That aside, the gunplay mechanic feels nice and the graphical style is delightful. Sounds quality is also good.

At a much more modest price tag of $4.99 this game would indeed be worthy of 4 stars and be a good value but at anything more it’s simply not worth it.

Kodi
Sep 24, 2017
★★★
Good, but story mode difficulty needs to be reworked. It can either be too easy or absolutely frustrating sometimes. I breezed through the game until I reach a particular point defending a gas can. After several tries the difficulty jump just made me lose interest, seemed like the objective was taking more damage then intended.

Ryan
Jun 12, 2019
★★★
Game is fun, a little cartoonish, but overall worth a try. Gameplay was repetative, but I quit after the gas can level. It was just too difficult and I don’t have time to waste or the intereste to play it 100 times before beating a single level.

Viveport User
Mar 04, 2019
★★★
Pretty cool wave game, amazing cartoon graphics and high def only thing i would want them to fix is add an online multiplayer mode and fix the aim of some of the guns they tend to shoot lower than they should outside of that a very good game

V
Oct 22, 2017
★★
was good untill youre in the barn defending the gas can then you delete the game and move on. There also is not an option to restart the story mode so you can enjoy the other modes. Never ending mode makes you slowly work through the game again and its a couple levels before you start having fun again because the zombies pick up and you have a decent gun.

Wyatt
Mar 24, 2020
★★
zombie wave and sadly that’s all. It doen’t make me who adjust to the splendid games keep playing this one.

martin
Jun 19, 2019
★★
good game however the game is ruined by the shotgun. Everytime I reload the gun gets stuck on the other end and ends up pointing ain wrong direction. Can’t progress in story becuase of this glitch which is a shame

sigurtor
Aug 14, 2019
★
shit game that dosent even work.
After starting it up, the game is stuck on menu to chose Campaign or survival mode, cant chose anything